Julian Of Norwich: Wisdom For A Time Of Pandemic And Beyond

by Matthew Fox: A time of crisis and chaos, the kind that a pandemic brings, is, among other things, a time to call on our ancestors for their deep wisdom… 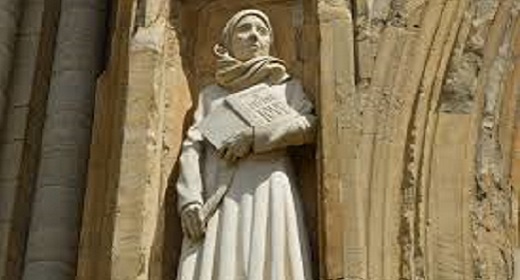 Not just knowledge but true wisdom is needed in a time of death and profound change, for at such times we are beckoned not simply to return to the immediate past, that which we remember fondly as “the normal,” but to reimagine a new future, a renewed humanity, a more just and therefore sustainable culture, and one even filled with joy.

Julian of Norwich (1342–ca.1429) is one of those ancestors calling to us today. After all, she lived her entire life during the worst pandemic in European history—the Bubonic plague that killed 40-50% of the population….

Julian was a champion of the divine feminine in a century when patriarchy ruled. Mirabai Starr writes that she “reveals the feminine side of God” and “gently and lovingly defies the patriarchy at almost every turn.”[i] Julian insisted that the feminine penetrate every aspect of our understanding of the divine, all dimensions of a triune God. She is a forceful spokesperson for the “motherhood of God” in our day when matricide, the killing of girls and women, wisdom, creativity and compassion, a matricide that culminates in the despoiling and crucifixion of Mother Earth, is going on everywhere….

She lays out her case for the goodness and grace of nature during a time of pandemic when so many were turning their backs on ever trusting nature again. In Julian’s day, people drew very different conclusions from the pandemic–namely, that nature hates us, that God is punishing us, and that humans are so guilty and full of shame that sin is the biggest truth about humanity. In short, they lost creation spirituality, as eco-theologian Thomas Berry makes clear. Julian did not go down this theological rabbit hole, however, and this makes her so unlike the Protestant reformers and much of Christianity that followed even to our day.

While she has much to teach us in our time of self-enclosure during our twenty-first-century pandemic, she has just as much to teach us after the pandemic is over. Her teachings and insights are by no means restricted to a time of pandemic—in fact, our meditating on them and implementing them might well help to prevent pandemics in the future.

“The first good thing is the goodness of nature.

God is the same thing as nature.

The goodness in nature is God.

God feels great delight to be our Father.

God feels great delight to be our Mother.

We experience a wondrous mix of well and woe.

we or our neighbor are in—that’s how astonishing it is!”

The double blow that Julian delivers to patriarchy is to insist on the non-dualism of God and nature, God and humans, body and soul, sensuality and spirituality. Patriarchy thrives on dualism like a vampire thrives on blood. No wonder she was effectively ignored until the late twentieth century—her dismantling and deconstructing of patriarchy did not fit with the empire-building agendas of slavery, colonialism, genocide, and hatred of Mother Earth that we call matricide and has been driving western “civilization” since at least 1492….

The Christianity that invaded indigenous lands all over the world in the late fifteenth to seventeenth centuries could have used Julian’s understanding of faith as trust (which, incidentally, was also Jesus’s understanding of faith), rather than twisted versions of faith that conquistadores marched to with flags of Christ and the cross. Trusting one’s body, sensuality, and passions are at the basis of Julian’s non-dualistic creation spirituality. It is trust—as psychologist William Eckhardt demonstrates in his book on a psychology of compassion—that builds compassion, not fear.

Seven hundred years ago, we could not understand Julian and the creation spirituality lineage she carries with her. Today, with a women’s movement, women active in scholarship and leadership, a Black Lives Matter movement, and an ecology and extinction rebellion movement—we can! And with matricide and misogyny staring us in the face, we must.

What, after all, is patriarchy if not the killing of the mother? And roping in a punitive Father God to enlist divine sanction and approval?

Who is Julian if not the herald of the Return of the Mother principle of creativity and caring, compassion, justice, and strength? Maybe Julian is to the twenty-first century what Karl Marx (and Charles Dickens) were to the nineteenth. …Julian takes on the privilege and dangers of patriarchy by deconstructing it. Instead of a punitive Father God, she presents us with a loving, Mother God. Instead of exalting survival for the few, she declares a democracy of justice and caring. Instead of a dualism of body vs. soul, masculine vs. feminine, human vs. nature, she proclaims unity. Instead of fear, trust. Instead of leading with the reptilian brain, she thinks with the mammal, co-operative brain. Instead of raping and plundering Mother Earth, she honors the divine in nature and the “web of creation” that Hildegard wrote about. Instead of human egoism and narcissism, she issues a new invitation to celebrate and to share. And instead of self-pity and self-aggrandizement, she models a healthy self-love that leads toward service to others.

Julian clearly gifts us with a paradigm shift for religion, from an ideology of original sin to a consciousness of original goodness or original blessing. From guilt to gratitude. From the question that has dominated religion from Julian’s day to our own, what the great biblical scholar Krister Stendahl described as the “neurotic question not found in the Bible”—that is, “Am I saved?”—to a question of gratitude and grace: “How do we give thanks and give back to mother earth and the cosmos and future generations all the blessings our species has inherited?”

–Excerpts from the Introduction and Epilogue to Julian of Norwich: Wisdom in a Time of Pandemic—and Beyond by Matthew Fox