Mother Ann’s Work, Or How A Lot Of Embarrassing Ghosts Visited The Shakers

From 1837 to the mid-1840s, Shaker communities received a flood of ghostly visits they called Mother Ann’s Work… 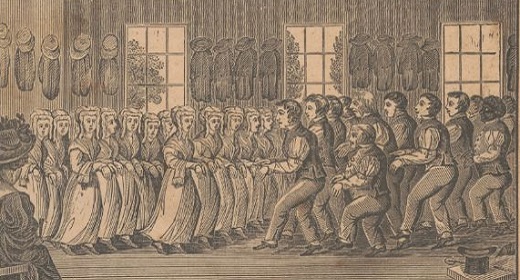 Their dead founder, Mother Ann Lee, was the first to stop by. Then came prophets, Indians, Alexander the Great, Napoleon, Pocahantas and George Washington. Angels visited to dictate long messages, while other spirits brought songs and dances. Tecumseh’s ghost told the Shakers he’d converted all his chiefs to Shakerism.

The visitors sometimes arrived quietly and appeared to lone individuals. But sometimes they came during worship services and inspired frenzied dancing, shaking, twitching, whirling, jerking and singing. And sometimes they inspired a Shaker to babble in a strange pidgin.

The Shakers called it the Era of Manifestation, a time of spiritual revival when Shakers received Mother Ann’s Work. Eventually, they decided the spiritual visits were a little embarrassing, and closed their doors to flesh-and-blood visitors==–

On Dec. 30, 1841, the Shakers in Harvard, Mass., reported Mother Ann, their dead founder, had paid them a visit. So had Holy Angels and ancient saints and departed spirits.

Mother Ann Lee, the founder of the Shakers, had had her own visions. She was 21 in 1757 when she joined the Shaking Quakers in Manchester, England. Authorities put her in prison for her beliefs. There she had her vision that the only road to salvation ran through celibacy and confession. Once released from prison, she emigrated to upstate New York. In 1781 she and eight followers founded the colony in Harvard, Mass., because she’d seen the place in a vision.

Mother Ann died in 1784, and her followers in Harvard decided they should live away from the world in their own community. Women and men were separate but equal – literally, as they practiced celibacy. They also practiced tolerance, as they accepted Jews, Indians and African-Americans. The Shakers held property in common and lived according to the principles of simplicity, honesty and usefulness.

Despite their ban on sex, the Shakers grew and spread. They established dozens of U.S. communities, about a dozen in New England. In Maine, the Shakers built communities in Alfred, Gorham and Sabbathday Lake. They settled one village in Enfield, Conn., and two in New Hampshire, in Canterbury and Enfield. Massachusetts had five, in Hancock, Harvard, Savoy, Tyringham and Shirley.

But by the 1830s, the original leaders of the Shaker communities had nearly all died.

The visions began on Aug. 12, 1837, in the Watervliet, N.Y., Shaker community. Gideon Kibben had a vision of Mother Ann Lee leading the heavenly host through the village, three or four feet off the ground. Soon, young girls started having visions in Watervliet. A spirit visitor took Anne Mariah Goff to a square building where she met Ann Lee dressed in shining white robes and then stroked an angel’s feathers. Pocahantas appeared to another, while other young girls spoke in tongues and fell into trances, sometimes lasting as long as seven hours.

Word of the visions spread throughout the Shaker community, and soon the spirits visited others. The Shakers called them Mother Ann’s Work, because they believed her spirit was returning to revive the next generation’s faith.

Alexander the Great visited Harvard and asked a Shaker her name, according to an unpublished manuscript on Shaker history. She said, ‘Ann Alexander.’ His joy, apparently, knew no bounds. “He exclaimed through the Visionest, (which in this instance was Ann Alexander herself) beautiful! beautiful! This is right, this is as it should be. Ann! Mother’s name! Alexander! my own, what a glorious union of names.” The spirit visitors brought gifts in the form of songs, prophecies and drawings. One Harvard Shaker, Joanna Randall, received gifts of 62 songs in three months from 1844-45.  The well-known song, Simple Gifts, was said to be Mother Ann’s Work in Alfred, Maine.

Hannah Cohoon, a 67-year-old Shaker in Hancock, Mass., received a gift in the form of the Tree of Life drawing. She described how it happened:

…the spirit showed me plainly the branches, leaves, and     fruit presented or drawn upon paper. The leaves were checked or (unreadable)     and the same color you see here. I entreated Mother Ann to tell me the     name of this tree which she did Oct 1st 4th hour PM by moving the hand    of a medium to write twice over Your Tree is the Tree of Life.

Mother Ann’s Work attracted real live visitors who came to ridicule the sect. Or else outsiders just happened to see

One spirit visitor told the Harvard Shakers to sow seeds of peace before they planted their crops. The Shakers then marched through the fields, sowing and watering invisible seeds.

“Those who often saw frenzied women “whirling” along the public road for long distances, and dancing with rhythmic shaking of heads, hands and arms dignified into a ceremonial of worship, were tempted to jeering comment and ridicule,” wrote Henry Stedman Nourse in his History of the Town of Harvard, Massachusetts.

In 1841, the Shakers decided to close their doors to outsiders during their rituals.

By 1845, the Age of Manifestations began to ebb and eventually ran its course. The Shaker communities declined after the Civil War, and today only two Shakers remain at Sabbathday Lake.