by (Spirit Rock): It is said that soon after his enlightenment the Buddha passed a man on the road who was struck by the Buddha’s extraordinary radiance and peaceful presence… 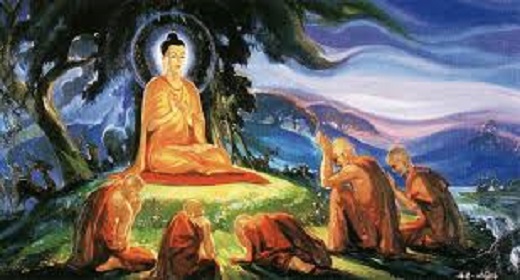 The man stopped and asked, “My friend, what are you? Are you a celestial being or a god?”
“No,” said the Buddha.
“Well, then are you some kind of magician or wizard?” Again the Buddha answered, “No.”
“Are you a man?”
“No.”
“Well, my friend, then what are you?” The Buddha replied, “I am awake.”

The word buddha means “one who is awake.” It is the experience of awakening to the truth of life that is offered in the Buddhist tradition. For 2600 years the practices and teachings of Buddhism have offered a systematic way to see clearly and live wisely. They have offered a way to discover liberation within our own bodies and minds, in the midst of this very world.

History records that the Buddha was born as a prince in an ancient kingdom of northern India. Although as a youth he was protected by his father in beautiful palaces, as he grew older the Buddha encountered what we must all face: the inevitable sorrows of life. He saw the loss of all things we hold dear, and the aging sickness and death that come to every human being. Seeing this, he chose to renounce his royal title and leave his palace to become a seeker of truth, searching for the end of human sorrow, searching for freedom in the face of the ceaseless round of birth and death.

For some years the Buddha practiced as an austere yogi in the forests of India. In time he realized that his extreme asceticism had brought him no more freedom than his previous indulgence in worldly pleasure. Instead, he saw that human freedom must come from practicing a life of inner and outer balance, and he called this discovery the Middle Path.

Having seen this, the Buddha seated himself under a great banyan tree and vowed to find liberation in the face of the forces that bring suffering to humankind. He felt himself assailed by these forces — by fear, attachment, greed, hatred, delusion, temptation and doubt. The Buddha sat in the midst of these forces with his heart open and his mind clear until he could see to the depths of human consciousness, until he discovered a place of peace at the center of them all. This was his enlightenment, the discovery of nirvana, the freeing of his heart from entanglement in all the conditions of the world. The realization of truth that he touched that night was so profound that his teachings about it have continued to inspire and enlighten people all over the world to this day.

From the Buddha’s enlightenment, two great powers were awakened in him: transcendant wisdom and universal compassion. Setting in motion the “Wheel of the Dharma,” the Buddha wandered first to the Deer Park in Benares and gave instructions to the yogis who had practiced with him in the forest. After this, for 45 years he brought the teachings of wisdom and compassion to all who would listen. These teachings, which the Buddha called the Dharma or Way, are an invitation to follow the path of enlightenment. They are an invitation to all who hear them to discover their own “buddha-nature,” the freedom and great heart of compassion that is possible for every human being.

What the Buddha Taught

To bring about the awakening of students of all temperaments, the Buddha taught a wonderful variety of spiritual practices. There are foundation practices for the development of loving-kindness, generosity and moral integrity, the universal ground of spiritual life. Then there is a vast array of meditation practices to train the mind and open the heart. These practices include awareness of the breath and body, mindfulness of feelings and thoughts, practices of mantra and devotion, visualization and contemplative reflection, and practices leading to refined and profoundly expanded states of consciousness.

To carry on these teachings, the Buddha created an ordained sangha, what is now one of the oldest surviving monastic orders on Earth. These monks and nuns, who still number in the hundreds of thousands around the globe, follow the Buddha through a life of renunciation. But the teachings he left were not limited to renunciates. They can be understood and awakened in the heart of human beings in every circumstance, in every walk of life. The essence of these teachings is what we offer at Spirit Rock.

(Adapted from Teachings of the Buddha, edited by Jack Kornfield with Gil Fronsdal, Shambhala, 2012.)

In your study of the Dharma, you will encounter numerous lists, which the Buddha created to make his teachings accessible and memorable. Outlined below are some foundational ones that are key to your understanding of the Dharma.

Buddha – the historical Buddha and one’s own potential for awakening
Dharma – the teachings of the Buddha; the truth of the way things are
Sangha – the community; in Asia this refers to the monastic community, in the West this includes lay practitioners

The Triple Gem is also referred to as The Three Refuges: “I take refuge in: the Buddha, the Dharma, the Sangha.”

The Three Marks of Existence

The Four Foundations of Mindfulness

The Seven Factors of Enlightenment