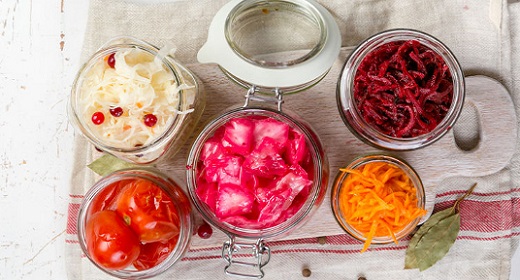 If that all sounds too good to be true, it’s time you got acquainted with the top five traditional, fermented antiaging foods

If you are interested in optimizing and maintaining your health and vitality, eating a nutrient-dense diet is a critical piece to the puzzle. Consuming foods with high levels of essential vitamins, minerals and micronutrients provides cells with the building blocks for regeneration and disease prevention and is essential to long-term wellness.

One of the most potent sources of nutrition, bite-for-bite, are fermented foods. An ancient method of food preservation, fermentation is a natural process in which microbes, such as bacteria or yeast, convert sugars into acids or alcohol under anaerobic conditions. Fermentation produces “good” bacteria called probiotics, which confer a wealth of benefits to intestinal flora when consumed, enhancing the health of your gut microbiome and boosting your immune system.

Is Fermented Food the REAL Fountain of Youth?

With nearly 35% of the U.S. population aged 45 and older,[i] medical researchers are on the hunt for a real fountain of youth. Thanks to the enzymatic boost provided by living microbes in fermented foods, the secret to lifelong vitality may lie in adding these nutritional powerhouses to your dinner plate. The scientifically backed health benefits of eating probiotic-rich fermented foods include:

There are many delicious options for adding fermented foods and beverages to your diet. Fermenting foods imbues them with a complex flavor profile and a tart, tanginess that can be enjoyed at breakfast, lunch and dinner. If you’re new to fermented foods, start by adding a couple of teaspoons to your plate as an addition to regular meals.

You can work up to enjoying fermented foods as mainstays of your diet, and even create new recipes for you and your family to enjoy. Your body — and your microbiome — will thank you for it for years to come.

Yogurt is a popular fermented milk product with a sour taste and creamy texture. Most yogurts contain bacterial cultures, however products can vary in the amount of probiotics they contain, so be conscious when reading labels. If you purchase yogurt, look for “live and active cultures” on the container or a guaranteed minimum viable bacteria count, and avoid the many heavily sugared brands.

Yogurt is also remarkably simple to make at home, requiring only a saucepan or pressure cooker to boil the milk, and starter cultures to begin the fermentation process. Most commercial yogurts contain acidophilus bacterium or bifidobacterium lactis, which you can add using liquid or powdered probiotics or by adding a small amount of an existing batch of yogurt.

If you can’t drink milk without digestive upset and think yogurt is off limits, fermented dairy products may be an exception. Fermentation helps break down lactose, the natural sugar in milk, so even individuals with lactose intolerance may be able to digest yogurt and kefir without difficulty.[x] Kefir is a yogurt-like drink with a thinner consistency and higher protein than yogurt but possessing the same digestive benefits.[xi]

The benefits of fermented milk products are not exclusive to dairy milk. Vegans and dairy-averse individuals can find several varieties of non-dairy yogurt in most health food stores, including soy, almond, and coconut milk yogurts.

Fermenting vegetables is a great way to get the health benefits of probiotics in a way that suits your personal taste. Cultures from around the world have been fermenting native varieties of produce for centuries as a way to preserve food before modern refrigeration. While freshly picked vegetables may only be viable for a matter of days, fermenting vegetables in brine and storing in air-tight jars can increase shelf-life to several months.[xii]

You can find easy inspiration for your fermentation adventures from traditional multicultural recipes like Korean kimchi. A spicy pickled condiment made from cabbage and red chili, kimchi has been associated with anticancer properties.[xiii] Kimchi is also credited with antiaging effects due to its ability to decrease free radical production.[xiv]

Other traditional options for fermenting vegetables include raw sauerkraut and pickled cucumbers, cauliflower and even leafy greens like mustard and collard. Don’t forget to add flavorful spices such as dill and coriander, or for a spicier mix include garlic, ginger and chilis or hot peppers.

Kombucha is a tart, fizzy, fermented tea beverage that has become something of a cultural zeitgeist. Popular with health enthusiasts of all ages, you can step up to a kombucha bar in many urban centers and take classes on how to brew your own Instagram-worthy bottles in a multitude of exotic flavors.

Kombucha is brewed using a batch of sweetened tea and a bacteria and yeast pancake called a SCOBY (symbiotic culture of bacteria and yeast). Both green and black tea can be used, however black tea and white sugar are considered the finest mediums for traditional kombucha.[xv]

The SCOBY floats in the tea, feeding on the sugary elixir, growing in size and eventually sealing off the liquid at the top like a raft. This keeps potential harmful bacteria at bay and creates the ideal anaerobic conditions for fermentation. A ratio of 50 grams of sucrose per liter of purified water has been used in traditional recipes and is considered the optimal concentration of ethanol and lactic acid.[xvi]

Leave the brew in a lightly covered jar at room temperature (70° to 80°F) for one to three weeks; the longer the tea is allowed to ferment, the stronger and tarter it becomes. Once the brew has achieved desired strength, transfer the liquid into individual bottles where it can be flavored with fresh or candied fruits, ginger slices, raisins, vanilla and the like.

Transfer the now-larger SCOBY (it will add a layer with every batch) to a new container to begin the process again, or store it in a small amount of tea in a sealed jar in the refrigerator to slow the growth process. The bottled tea can be stored at room temperature for one to two weeks to encourage carbonation, after which time it should be refrigerated.

Experimenting with flavors and potency is part of the fun, and recipes can be modified to suit individual taste preferences. Be sure to use impeccably clean equipment in your process to ensure that no harmful bacteria are introduced.

Besides being delicious, healthful and fun to make, there are at least 18 healthy reasons to sip kombucha. Kombucha’s antioxidant activity has been found to be 100 times higher than vitamin C and 25 times higher than vitamin E.[xvii] Kombucha’s high levels of vitamin C boost immunity, and its antioxidant power protects against cell damage, inflammatory diseases, suppressed immunity and tumors.[xviii] Kombucha has also been shown to be effective for prevention against broad-spectrum metabolic and infective disorders.[xix]

Made by fermenting apple juice with yeast, apple cider vinegar, or ACV, is a staple of health food kitchens the world-over. Used to make salad dressing, marinades and baked goods, ACV is also used in many food-based personal care recipes due to its ability to add shine to hair and clarity to your complexion. Good bacteria from the yeast convert alcohol that develops during fermentation into acetic acid, which is responsible for ACV’s distinctive sharp, sour smell and taste.[xx]

ACV is attributed with antidiabetic and antioxidant effects that make it a useful ally in the fight against diabetes,[xxi] a common problem in the developed world. A 2017 study of obese rats found that a daily dose of ACV attenuated oxidative stress and reduced the risk of heart attack associated with obesity-related cardiovascular disease.[xxii]

Because of its high acidity, consuming too much ACV can be irritating to your teeth, throat and stomach. As a supplement to daily health maintenance, it’s recommended to start with no more than 2 tablespoons of ACV diluted with equal parts water, taken on an empty stomach immediately upon waking as a jump-start to your daily digestive processes.

A traditional staple of the Japanese diet, miso — fermented soybean paste — is credited with saving the lives of 21 health care workers stationed less than 2 kilometers from ground zero, Nagasaki, Japan, on August 9, 1945.[xxv]

Dr. Tatuichiro Akizuki, a physician, credited this miracle to the fact that everyone was consuming daily cups of miso soup garnished with wakame seaweed.[xxvi] A 2003 study from the Research Institute for Radiation Biology and Medicine at Hiroshima University showed that miso does, in fact, have the ability to prevent radiation injury.[xxvii]

Made by combining a mash of soybeans and grains with sea salt and koji (a mold starter), the mixture is fermented for three months to three years, depending on the strength of flavor desired. The resulting enzyme-rich paste contains vitamins, salts, minerals, plant proteins, carbohydrates, fat and living microorganisms. The potent, salty flavor of miso makes it a great base for soups and sauces and for flavoring meat substitutes like tempeh.

Proof that not everything that’s good for you has to be bland, frequent, long-term consumption of miso soup has been associated with a reduced risk of breast cancer[xxviii] and reduced risk of heart disease.[xxix] Fermented soy products have also demonstrated effectiveness at staving off bone diseases like osteoporosis.