Alternative Meats: A Convenience Or A Curse?

by Jill Schildhouse: The pros and cons of eating plant-based meats… 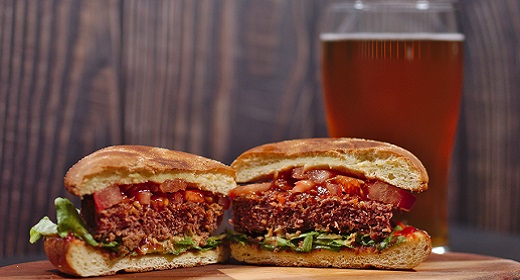 Have you started swinging through the drive-thru more frequently since fast-food chains decided to hop on board with plant-based burger options? Sure, Burger King’s Impossible Whopper and Carl’s Jr.’s meatless Beyond Meat burger may seem like enticing options after a long day — heck, even Ikea is rumored to be working on a meatless version of its famous Swedish meatballs.

And of course, it’s an encouraging sign that a plant-based lifestyle is becoming more mainstream, especially when it’s accepted in restaurants known for their beefy offerings. But could racking up too many fast-food visits mean you’re sacrificing some of the positive health benefits associated with a plant-based diet for the sake of convenience?

“Meat alternatives are taking center stage because more and more people are recognizing that taking meat off our menus is an imperative if we are to preserve the planet’s life support systems for future generations,” says Brenda Davis, R.D., a world-renowned expert in plant-based nutrition and coauthor of Nourish: The Definitive Plant-Based Nutrition Guide for Families.

Aside from being better for the planet, her coauthor, Reshma Shah, M.D., a plant-based pediatrician, notes the many health attributes with this lifestyle. “Plant-based diets have been associated with longevity, a decreased risk of heart disease, type 2 diabetes, certain cancers, and a healthy gut,” she explains. “Studies suggest the people eating a plant-based diet have a lower risk of being overweight or obese. Additionally, plant-based diets have been shown to be an effective strategy for treating many of the chronic diseases that make up the leading causes of death in the United States and throughout the world.”

First, let’s explore the benefits of adding alternative meats to your diet:

There are some downsides to alternative meat consumption, too:

How to Shop for Alternative Meats

A simple ingredient list with recognizable foods is always a good place to start. Next, Dr. Shah says to consider the amount of fat (especially saturated fat), sodium, and other additives.

“One particular additive that has gained scrutiny is the addition of ‘heme iron’ in certain plant-based meat alternatives,” she says. “Heme-iron is added to enhance the ‘meaty’ flavor and appearance of these foods — but it’s thought to be pro-inflammatory, cause increased body iron stores, and provide an increased risk of type 2 diabetes.”

How Often Should You Consume Alternative Meats?

As with most things in life, moderation is key. “Eating plant-based meat alternatives from time to time can certainly be a part of a healthy diet, but relying on them on a regular basis — especially if they are taking the place of whole, plant foods — would not be considered health-promoting,” concludes Dr. Shah.

It’s also important to note that the consumption frequency may depend on your overall state of health. “What is safe and appropriate for one individual may be quite different for another,” explains Davis. “If you struggle with hypertension or cardiovascular disease, you will want to minimize intake of the high sodium, high-fat meat alternatives.”