by Dr. Alberto Villoldo: Some of us know without a doubt that we were called to walk the path of the Shaman… 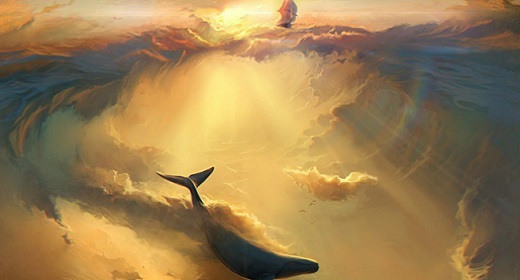 Something monumental and earth shaking like disease, death, or war came along changed our reality forever and we either embraced our spiritual calling or ran from it kicking and screaming, doubting we could ever succeed in this new endeavor.

One of my favorite tales of initiation is the biblical story of Jonah, who is called by God to go to Nineveh and teach the people there. Jonah is comfortable at home raising his children and dealing with everyday domestic affairs. When he hears God’s call, his response is to run as fast as he can in the opposite direction from Nineveh.

Terrified that he might fail at the task he has been given, Jonah boards a ship to get as far away as he can from his calling. When the vessel encounters heavy storms in the Mediterranean, the sailors suspect that someone has defied God, and they toss Jonah into the sea, where he is promptly swallowed by a whale. He remains in the whale’s belly until he is finally spat out—on the shores of Nineveh.

The whale in the story represents our emotions, a huge and irresistible power that threatens to swallow us and keep us trapped for days or years. Remember how long you were stuck in a painful relationship, angry with yourself and your partner, long after you realized it was time to leave? We can spend many years in the belly of the whale dealing with our rage, or our sense of not having the right partner or the right life, or our envy for the youth, success, or wealth others have that we might lack. Eventually the whale spits us out at the shores we were meant to reach.

When Jonah arrives on the shores at Nineveh, he is ready to follow his calling, unhesitating and fully able to access his power and to understand his mission. The shaman understands that there are more elegant ways to get to Nineveh than in the belly of a whale.

Initiation is nothing less than an invitation to an unimaginable destiny. It is fraught with danger and opportunity. The outcome is not guaranteed. It requires a courageous response, and invites us to become the hero of our own journey.

Sometimes, the journey spirals in upon itself and we are presented with a new opportunity to be reinitiated by serious life circumstances that once again shake our reality and require another courageous response to deepen our spiritual calling. World events are challenging us and calling us to continually go deeper.

Do you have the courage to respond to your calling in a new and greater way, until it becomes Truth?