Posted on December 12, 2020 | Views: 752
cwebb2020-12-12T09:34:54-08:00
by Tara Patel: Hyperloop Transportation Technologies Inc. said by the end of this decade it could be rolling out a commercial version of the high-speed transport concept envisioned by Elon Musk… 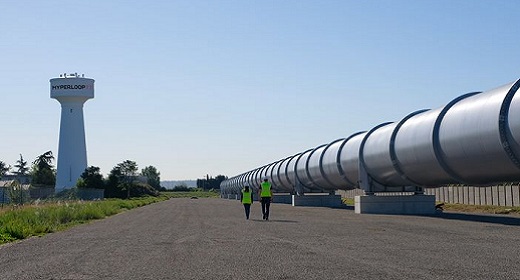 as the Los Angeles-based startup goes up against billionaire Richard Branson’s rival project.

Hyperloop TT on Tuesday unveiled a deal to integrate signaling gear from its new shareholder Hitachi Rail. The agreement follows another reached last week with Altran Technologies SA for 100 engineers to work at its European R&D and testing site in Toulouse.

Hyperloop TT and competitor Virgin Hyperloop, backed by Branson, are among leaders developing the mode of transportation that gained popularity after Musk touted it in 2012. The concept is based on moving passengers in capsules that float through low-pressure tubes designed to reduce friction.

The technology would be faster than existing trains such as the Maglev, which uses a levitation technology to lift rail cars above a track, and the French and German high-speed trains that criss-cross European countries. The efforts come as traditional rail operators like France’s SNCF accumulate billions of euros in losses this year due to the pandemic and are set to struggle in coming years to invest.

Branson’s Virgin Hyperloop last month completed the first test with passengers, which CEO Jay Walder called “super smooth” and proof the technology is safe. It’s aiming for U.S. certification in about five years and could be transporting passengers by the end of the decade, he said, pointing to possible corridors in the U.S., the Middle East, Europe and India.

“Our strategy is different, we’re focused on system integration,” Hyperloop TT’s de Leon said. Instead of a one-off test with some passengers, the company wants “to move people in a commercial prototype, everyday.”

Hyperloop’s 320-meter (1,049-feet) test track in Toulouse could be expanded to 5 kilometers in one go by skipping an intermediate step-up that was planned, he said. Candidates for the first operational lines include a Cleveland-Chicago-Pittsburgh corridor and Abu Dhabi, where work on a commercial prototype is set to begin next year, he said.

Musk, who also runs Tesla Inc. and Space Exploration Technologies Corp., released a 57-page white paper in 2013 about a tube-based system to move people from Los Angeles to San Francisco in half an hour because he was disappointed with California’s plans for a high-speed rail system.

He appeared to have dropped the plan in ensuing years before picking it back up again in 2017. His Boring Co. has outlined loops in Las Vegas, Los Angeles and between Washington D.C. and Baltimore.