Rabbi Rami Shapiro: All of this back story may be, you know, the Divine Mother saying, “ok, this is 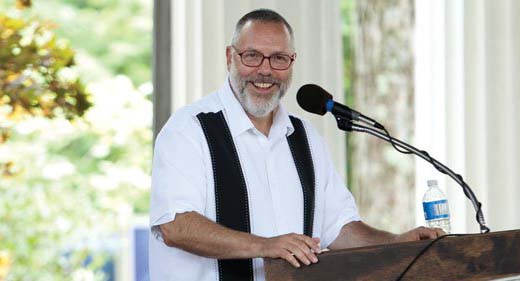 as much as we can take and we’re just going to shatter this and the shattering is going to cause tremendous upheaval.” So right now, I don’t know what’s going to happen with these refugees from Syria and Africa into Europe, but that’s just the tip of the iceberg when the climate refugees start happening. And I suspect we will all create what Donald Trump just called the other day at the debates, a something force…oh goodness, it was a great term. It was like a deportation force but I don’t know if that was the actual word. But there’s going to be a special army unit to just eliminate…

David Welch: Something about wet back something.

RABBI RAMI: Yeah…it was going back to that original thing from the Eisenhower time I think. But he had a different word for it. But it was, you know…we’re going to use the military in a way to keep ourselves from being inundated by climate refugees. And look, we’ve done this before.

DAVID: Or we can solve the climate problem, I mean the challenges, and not have to go down that road. Wait a minute…

RABBI RAMI: Yeah, we could, but we probably won’t. Yeah, I mean, there are…theoretically there are alternatives, but I’m not sure there’s enough just to stick with those levels of consciousness. I’m not sure there’s enough four energy in the people with power to actually make those kinds of decisions. I think we’re talking about, to be president or prime minister or you know, to be…

RABBI RAMI: You’re a level three person and you look at the military and this is a hammer and everything is a nail and those kinds of clichés but I’m afraid that we’ll simply do what we’ve done in the past just on a bigger scale. And I have some friends that talk…no, we’re going to have terra-forming or we’re going to go to another planet. We’re going to go to Mars now. And we’re going to turn Mars…

DAVID: Elon Musk, oh, being on Mars, we’ll save humanity.

RABBI RAMI: Because they don’t know how to flip burgers but they’ll bring a couple of burger flippers with them so they can still have McDonald’s. Not that they eat McDonald’s. I don’t know what they eat. But you know that kind of thing, going on to another planet. We’re talking about only the wealthiest people who are ever going to be able to afford to do that and then they’ll take the slave class to do the work.

DAVID: I think it’s more important to actually have heaven right here on this earth. Is there anything else you would like to say to the Awaken community?

RABBI RAMI: Yeah, I would say as chutzpah as it is for me to offer advice at all, I would say that continually making the shift from the personal to the transpersonal, level three to level four consciousness, is something that we have to do. If I say religiously, it’s sort of a pun, but we have to do it religiously, it has to become a discipline. We have to really, really challenge and break the narrow tribal stories that we have. I mean, in Judaism one of the things that I wrestle with all the time as a Jew is the “chosen people” story: that somehow there’s a God out there somewhere that chose the Jews among all the people and to receive the only revelation God had to give and to give us the only land that God chose among all the inheritable land on the Earth. You know, that very, what did you call it?…very jingoistic, very xenophobic kind of worldview. And every religion has that. This happens to be mine. But I think we have to challenge those stories and get beyond that kind of tribalism. So I was talking with this Lakota Sage last week and…

DAVID: Who was that?

RABBI RAMI: If I give you his name, I’ll mispronounce it but he was from a Lakota Sioux tribe and he was telling me, you know, “tribe is good, tribe is good.” And I kept saying, “yeah, except when it becomes tribalism.” And so in his world, tribe is maybe…it’s not a problem. But in my world, you know, I think it’s a problem. And I think that we’ve just got these competing religious tribes that are all playing a zero-sum game. I know Jews will say, “well Jews were chosen for Torah, but other people were chosen for this and other people were chosen for that.” That’s just something we made up thousands of years after the original idea because it’s not politically correct to say, “hey, wait…we’re the chosen ones.”

So I think what we have to do is get beyond that, the whole notion. I think we have to get beyond the notion of a God who chooses, a God who saves, a God who damns, a God who writes books, a God who dabbles in real estate. You have to get rid of all that stuff; that’s all Iron Age mythology, which we should, you know, allow to pass away and move into a new story. And people are telling the new story because the story is becoming in vogue on college campuses. You’ve got Brian Swimme and then the universe story and all these different things they are saying to us. Even as an individual, when someone asks me my…I’m going to be 65 in a few months, but when someone says, “how old are you?” I never do this because it’s really obnoxious, but I always want to say, “oh…I’m 13.8 billion years old. But I can’t get a cake big enough so when I get a cake, I just put 64 candles on it or 65 candles on it.”

But when you realize that…when I just even think about it…never mind anything mystical… when I just think about the fact—and it’s a fact—that I am the culmination of 13.8 billion years of cosmic creativity and as are you and as is everyone else…but just thinking for myself about myself when I realize it took 13.8 billion years for the universe to do this: Rami to do Rami. I said, “wow!…what an amazing truth that is and it carries such responsibility, you know? I mean, my family is not just my mom and my dad and all that…my family goes back 13.8 billion years!” Some of those rocks are still around! I have to take care of my sister rocks and my brother dirt or whatever it is.

That story needs to be told much more and people have to realize that. And when I realize it, you know, a lot of the stuff that’s bugging me today really doesn’t matter. I’ve been around for 13.8 billion years. This pain in the neck thing from the email is really not going to get to me so much. I think we have to change our sense of time to realize that we are the cutting edge of this evolutionary experiment. And you know, there’s no guarantee the experiment is going to pan out after all this time. It could be, it could fizzle out, and that’s the end of it. But maybe not…maybe this is the birth pang of the next level of evolution, if we can change the story. But if we just keep living with that Iron Age story, we’re going to end up with an Iron Age result, which is, we’re just going to kill each other because that’s really all we know to do, so yeah. Anyway.

DAVID: I wanted to flesh something out. Am I understanding that you’re getting up at 4 o’clock or very early every morning and this is sort of a sweet time that you write and meditate?

RABBI RAMI: No, not write…yeah, yeah, I do my meditation very early in the morning. My normal day is…and I don’t set a clock, because that’s too jarring.

DAVID: You just wake up when you wake up? You try to go to bed early?

RABBI RAMI: I go to bed at…so around 4 or 5 it’s already, I’ve had my 7 to 8 hours, right? So, I wake up naturally and I do all the silent meditation things, the repetition of the mantra and the silent sitting. Then, if I’m not on the road…if I’m on the road, then I just get up and go about my day, but if I’m not…if I’m home, then after that, I get up and I walk and, sometimes with my dog, sometimes by myself. Sometimes it depends on the weather, sometimes I’ll just go to the gym and walk, if that’s all I can do.

But there’s a place near here called The Greenway. It’s about, I don’t know…maybe a mile from my house. It’s all woods and you can walk out there and it follows Stone River. Lytle Creek flows into Stone River, but there’s this one spot where…I don’t know how to explain it exactly, but the Earth comes in to the water. There’s a big tree that’s sort of curved perfectly for my butt on the roots and some stones and you can actually sit just like it was a, you know, a Zafu meditation. And you can sit there and the water is going right around you and it has a beautiful sound and if you don’t move long enough the deer will come and they’ll drink early in the morning. So I try to go there if it’s not too cold.

So, I do the chanting and then I do the silent meditation and then I do the walking and that’s how I start the day and then I do some silly writing just to get my brain going, then I get to work. That’s how it goes. But there’s something about that very early in the morning time. This is how it was explained to me: is that level three is open to level four; level four is open to level five, you know? It all hasn’t congealed yet, so if I can just stay in that liminal space, it’s a nice place to meditate, to do mantra.