Who Is Really ‘First In Line’ For The Vaccine? It Depends On Your State.

by Sarah Elizabeth Richards: The FDA has authorized the Pfizer vaccine. Health-care workers and nursing home residents could receive the first doses within days, but being in the top tier does not guarantee instant access… 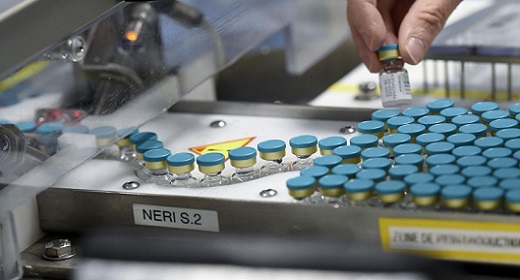 THE EASY PART was deciding who should receive the very first doses of COVID-19 vaccines. Few people could disagree with the wisdom of prioritizing health-care personnel or nursing home residents, as the U.S. Centers for Disease Control and Prevention decided to do on December 3. It’s a bid to safeguard our finite pool of frontline medical workers, as well as the most vulnerable people.

Even the planning part seemed smooth. It’s straightforward to vaccinate health-care employees because they usually work in the same place, and medical centers had plenty of practice administering flu shots en masse. As for group living centers, the CDC had already brokered a unique partnership with drug store chains Walgreens and CVS, whose employees were set to show up on site carrying vaccine vials, syringes, and alcohol pads.

Then came the hiccups.

On December 11, the U.S. Food and Drug Administration granted emergency use authorization for the Pfizer-BioNTech COVID-19 vaccine, a first for the American agency in charge of drug oversight. Initial shipments of 2.9 million doses are expected over the next week. Approval for a second candidate from Moderna may follow on December 17. All the while, health officials behind the scenes are racing to navigate several unexpected hurdles.

So far, the United States is expected to receive only enough vaccine doses from Pfizer-BioNTech to cover one of every eight health-care workers and elderly people living in long-term care homes. Consequently, state and local leaders are being forced to quickly triage vials for those most in need and identify so-called “sub-populations” within this top tier, creating a patchwork rollout. You can be a nurse in one city and be first in line, but drive across a state line and you’ll fall down the priority list.

You can be a nurse in one city and be first in line, but drive across a state line and you’ll fall down the priority list.

“Some will redirect the vaccine to a hospital that’s facing a high positivity rate so they receive more of the vaccine supply,” says Rebecca Weintraub, an assistant professor at Harvard Medical School who tracked states’ vaccine allocation plans for Ariadne Labs, a think tank run by Boston’s Brigham and Women’s Hospital and Harvard T.H. Chan School of Public Health. She was referring to the rate at which COVID-19 tests return positive; results above about 5 percent signal an outbreak is spreading uncontrollably.

For example, Oklahoma will give priority to inpatient medical staff, while Utah will focus first on hospitals in areas with a high prevalence of the coronavirus. New Mexico will put the health-care workers who give out the vaccine at the front of its line. Another major barrier is that Pfizer requires hospitals and health-care providers to order a minimum of 975 doses at a time, which may be too much for certain places. That could lead to waste because of limited access to the ultra-cold facilities needed for storing the vaccine.

“This has posed challenges, especially in rural areas of the country where that volume of product is more difficult to manage,” Anita Patel, deputy for distribution and data for CDC’s Vaccine Task Force, said at the FDA’s advisory meeting on Thursday.

If those pivots aren’t challenging enough, new reports about the frontrunner vaccine’s side effects are prompting some program administrators to consider doling out the doses in staggered groups to make sure the nation’s valuable ICU staff aren’t all taking a sick day at the same time.

Meanwhile, the seven-page enrollment forms that state officials had to send to the CDC to designate which health-care locations should receive vaccines is extensive and time-consuming, says Claire Hannan, executive director of the Association of Immunization Managers based in Rockville, Maryland. This foreshadows potential glitches when states move to the next priority groups of essential workers and high-risk people. “We’re getting to a point where there are a lot of things expected of the states,” she says.

As of last week, Hannan estimates, fewer than half had finished enrolling all the providers needed and were still working on tasks such as hiring new staff, figuring out cold-storage capacity, and setting up a consumer email address or hot line. “They need an understanding of the big picture and more information on the doses coming off the assembly line,” she says.

States are under pressure to quickly master the learning curve of this first phase, given that identifying and prioritizing the next groups won’t be so clear-cut.

“This is the opportunity to work out the kinks,” says Marcus Plescia, chief medical official of the Association of State and Territorial Health Officials based in Arlington, Virginia. “We’re trying to think through everything that could go wrong.”

Officials with Operation Warp Speed—the Trump Administration’s vaccine development initiative—said that within 24 hours after the Pfizer vaccine wins clearance, the government would begin releasing 6.4 million doses. Once the Moderna vaccine is authorized, perhaps a week after Pfizer’s, 12.5 million doses would begin to be released under a similar schedule.

Given that people must take two doses of the Pfizer or Moderna vaccines for a full response, these early batches are only enough for 3.2 million and 6.3 million people, respectively. These numbers don’t come close to covering the estimated 21 million health-care workers and three million elderly people living in long-term care homes in the United States. States were already being told to expect less than what was originally promised.

“Next week, states will face an immediate scarcity,” Weintraub says. This comes on top of news that the Trump Administration committed to buying enough doses from Pfizer and BioNTech for just 50 million people, even though they had the option to secure more. In the meantime, the companies negotiated contracts with other countries and won’t be able to provide the United States with additional doses until summer.

Health-care facilities and government administrators are resigned to receiving far fewer doses than they need. For example, at University of California, San Francisco, they’re preparing to receive a few thousand vials and must decide who among the 10,000 staffers directly taking care of patients should receive them.

“We’ve had to figure out how to sub-sub-categorize patients,” says Robert Wachter, chair of the UCSF department of medicine, adding that priority likely will go to workers in the emergency rooms or COVID-19 wards. “It’s not that easy.”

Adding to the complexity is the potential for side effects, which so far aren’t severe but can potentially affect a person’s capacity for work. Nearly 63 percent of trial volunteers complained of fatigue, 55 percent experienced a headache, 38 percent had muscle pain, nearly 32 percent had chills, and 14 percent spiked a fever, according to Pfizer and BioNTech documents released Tuesday to the FDA as part of the application for an emergency use authorization.

Although severe reactions occurred in fewer than 5 percent of participants, those warnings were enough to prompt UCSF officials to plan to vaccinate no more than a quarter of its first-tier recipients at a time.

“Some people might feel crummy for a few days,” Wachter says. “The next group will get it five days later. Even if we had the capacity to vaccinate everyone at the same time, we wouldn’t do that.”

Not surprisingly, the need to triage layers of health-care workers can bring up uncomfortable questions. The frameworks on deciding priority groups that were suggested by the National Academy of Medicine and the CDC’s Advisory Committee on Immunization Practices took into account people’s assumed risks due to the conditions they have or the jobs they perform.

The goal was to protect those people who have suffered the most and who keep the rest of us going as a society, says Jewel Mullen, associate dean for health equity at Dell Medical School at the University of Texas at Austin. Yet she acknowledges that characterizing nuances of risk can be tricky. For example, how does one rank the sacrifices of a frontline nurse versus a respiratory therapist?

“The states will decide who are the most essential health-care workers,” she says. “I don’t want to make anyone mad, but if you’re a radiologist reviewing X-rays at home, that’s not the same as being an X-ray technician going into an ICU unit.”

Despite the fact that the CDC voted on federal guidelines designating the two priority groups, the rollout was designed to give states power on how to execute it. For example, Kentucky is focusing on people in long-term care facilities and then moving to health-care workers; in Alabama, it’s the opposite.

Such flexibility allows states to target their most vulnerable populations, says Plescia of the Association of State and Territorial Health Officials. “Some states said they would start rolling out the vaccine to both settings. If you have a big population with long-term care residents, it makes sense to start there because they might be taxing the hospital system,” he says. “But some states will have different demographics, so it varies.”

Although states will be making such judgments, the federal government has largely abandoned the role of prioritizing the geographic areas in the most dire situations. It’s distributing these initial doses proportionately to the states by population. That decision could spark controversy because it doesn’t take into account national hot spots.

“It turns a blind eye to where the pandemic is right now when certain states are experiencing a massive surge,” says Josh Michaud, associate director for global health policy at the Henry J. Kaiser Family Foundation in Washington, D.C. On the other hand, some critics might applaud an allocation system based on fairness and not immediate need: Why should epicenters that have not been compliant with public health measures be rewarded with a greater share of the vaccines?

Despite the initial challenges, health officials hope for an orderly rollout to prepare for the inevitably messier phases to come. “When we get to bigger allocations, we get more challenges,” says Hannan of the Association of Immunization Managers. “When it starts coming, it will come like an avalanche.”

That’s when states have to set up IT systems, and they must hire and train workers to go out into communities to reach other essential workers, high-risk people, and others on the Social Vulnerability Index. This system takes into account factors such as crowded housing or poverty that are linked to poor health outcomes.

That’s also the point when the previously neatly defined categories start to expand and become more complex—and there’s less ability to control who will fairly receive it next. In other words, there’s an increased risk of someone skipping to the front of the line.

If you visit a community clinic or a pharmacy such as CVS or Walgreens, it could be more complicated for the provider to confirm if you’re a teacher or work at a grocery store. “How do you prove you have a preexisting condition? Will you need a note from your doctor?” Wachter asks. “I assume they will be figuring this out. Or it will depend on whether the honor system works.”