by Jason Dorrier: In 1956, an early demonstration of solar photovoltaics produced a watt of energy for the modest price of an inflation-adjusted $1,865… 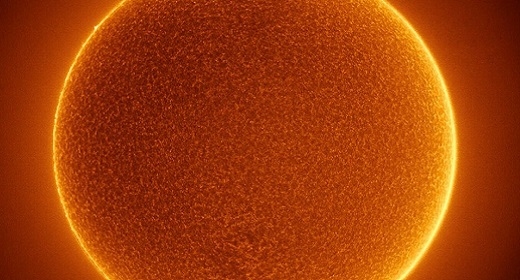 Put another way, you’d need to spend over a half-million dollars to equal one modern 320-watt rooftop solar panel. Of course, price aside, you’d also need to find room for a boatload of solar cells from 1956 to equal the output of that single, solitary modern panel.

In a recent article on the falling cost of renewable energy, Our World in Data’s Max Roser writes that, in the beginning, solar power made no sense for anyone, anywhere on the planet.

Luckily, there’s a place where sunshine is abundant, where the grid is inaccessible, where price is no object, and where there’s nothing but room. Solar found a practical toehold in early space exploration, and from there the dominoes started to fall.

The space industry built solar panels for satellites, and in the process learned to make them better and more affordable. Bit by bit, the price of a solar module fell until it made practical sense back on Earth in remote areas, far from the grid. New applications grew solar capacity a bit more, and the industry again got better at making solar cheaper to build and deploy.

Author and renewable energy advocate and investor Ramez Naam explains, “This happens through learning-by-doing, a mixture of innovation that improves the technology itself and innovation that reduces the amount of labor, time, energy, and raw materials needed to produce the technology.” This process is called a “learning curve.”

While not all technologies have a strong learning curve, the ones that do can go from obscure to owning the world surprisingly fast. (Be sure to check out Roser’s post for a good deep dive into Wright’s Law.)

Indeed, as we’ve deployed more solar, the cost of the technology has declined at a predictable rate indicative of a learning curve, according to Roser. For every doubling of installed solar capacity, the price of solar modules declined by roughly 20%. 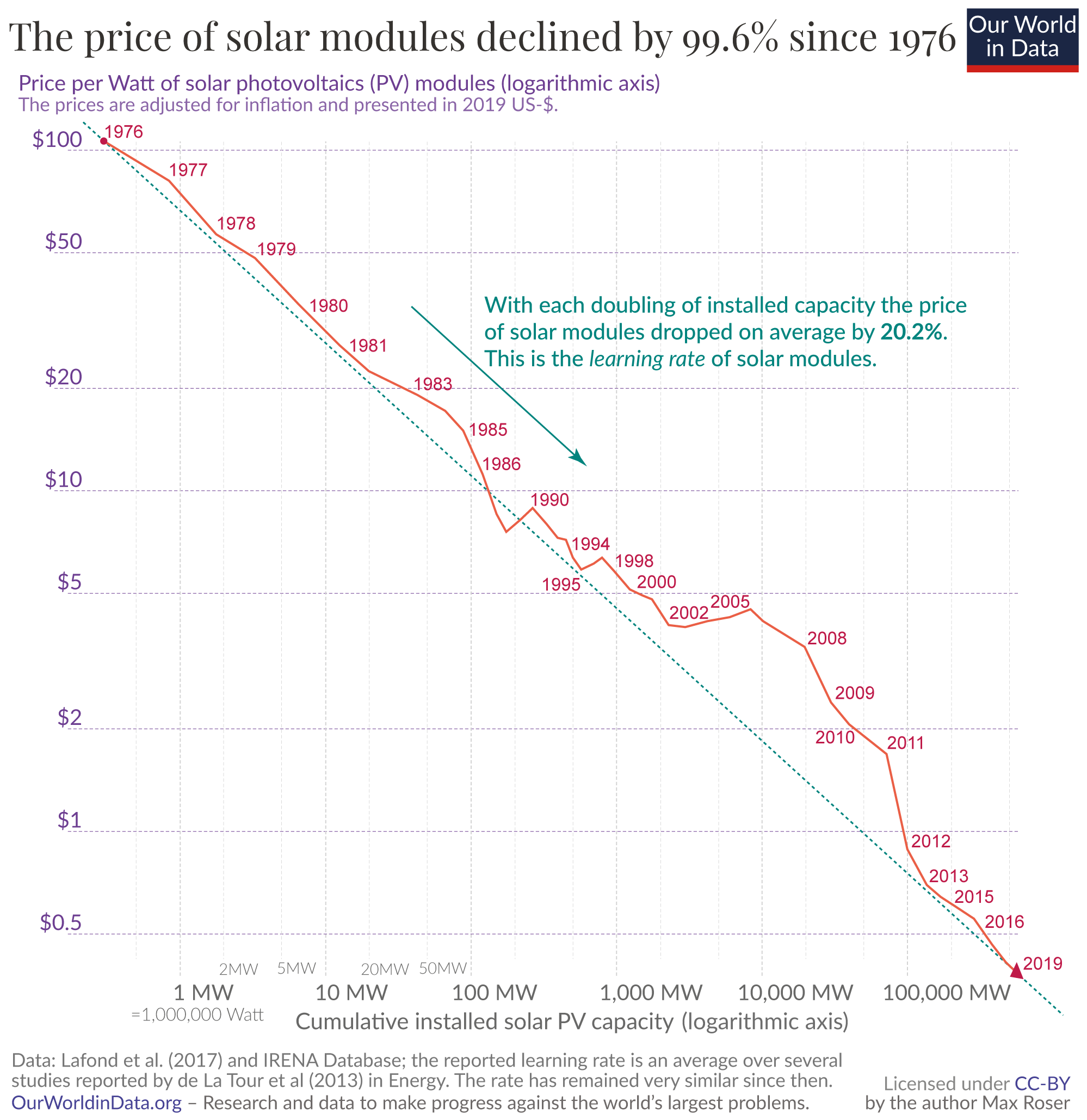 As the total installed capacity of solar increased between 1976 and 2019, solar modules went from $106 to $0.38 per watt. And yet, despite falling costs, for most of its history, solar was considerably pricier than mainstream sources of electricity like coal and gas.

It wasn’t until the last decade that things got really interesting.

Over a relatively short span, the cost of utility-scale solar—that is, centralized plants that supply the grid—has gone from impractical to one of the cheapest around. To demonstrate this trend Roser charts the global average levelized cost of energy (LCOE) of building new power plants. These are the prices providers estimate they’d need to charge customers to break even over the lifetime of a new plant—regardless of energy source—and they cover everything from construction to fuel prices to operation.

From 2009 through 2019, the cost of electricity from new solar power plants fell 89%, overtaking cheap sources like coal and some gas. And the cost of electricity from new onshore wind fell 70% (which is also due to a tech learning curve). Those are pretty breathtaking numbers on their own, but there’s no substitute for a good visual. Luckily, that’s Roser’s bread and butter. Here’s the last decade in a nutshell. (All prices in this chart are without subsidies.) 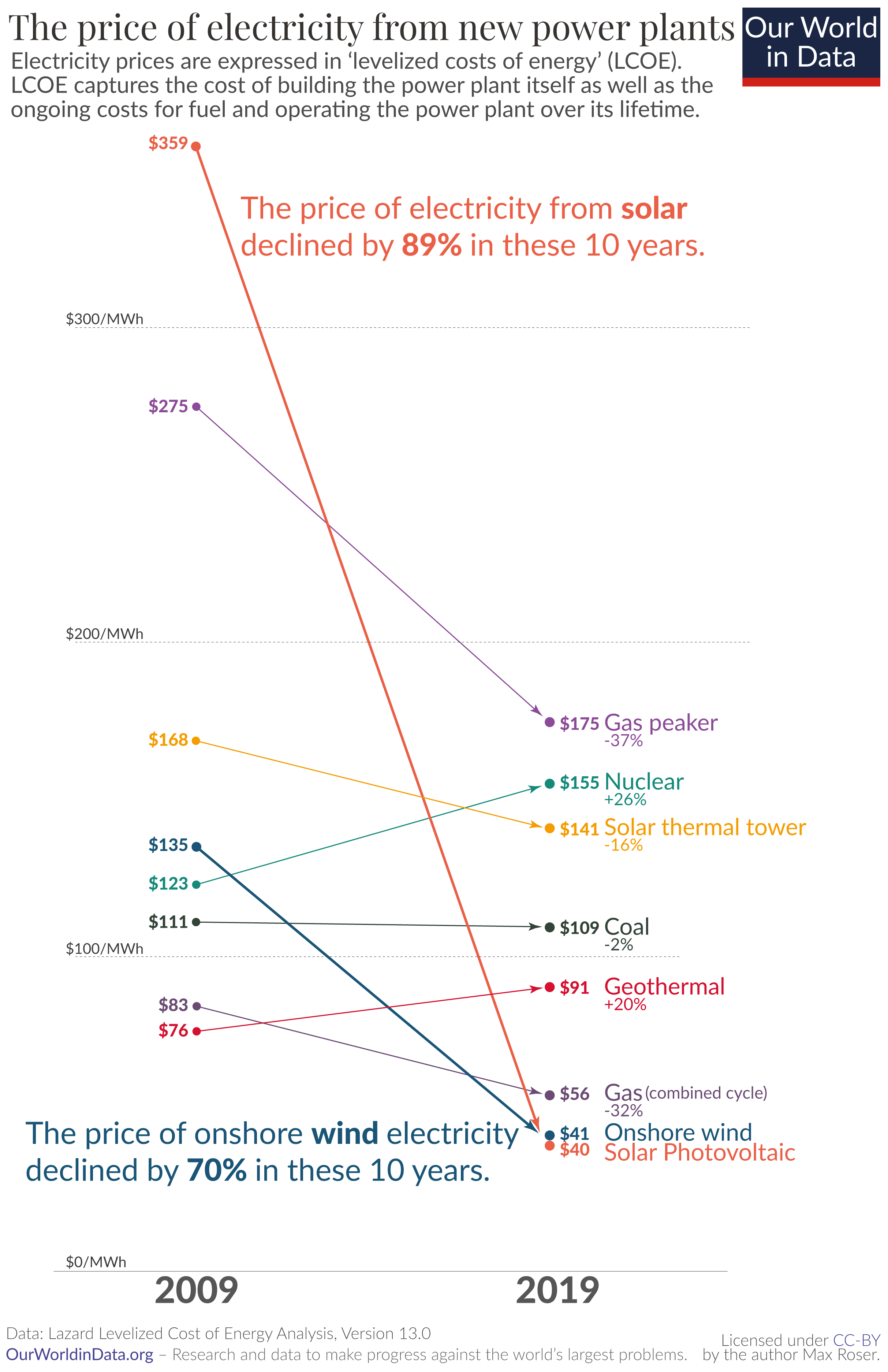 You might have noticed that coal prices didn’t budge. That’s because coal and gas aren’t on a learning curve like solar and wind are. And although gas prices declined, Roser chalks that up mainly to a price decline in fuel costs driven by fracking and the shale boom.

Notably, the cost of fuel—which is, of course, zero for wind and solar—is a significant portion of the price of electricity provided by fossil fuels. It will fluctuate, but it will never be zero.

“This means that for all non-renewable power plants which have these fuel costs there is a hard lower bound to how much the cost of their electricity can possibly decrease,” Roser writes.

Given the fact renewable plants are now, on average, cheaper relative to fossil fuel plants, one would think power providers would increasingly choose renewable sources over coal or gas. And that does seem to be the case. Renewables accounted for 72% of all new power capacity added across the world in 2019, according to Roser, and despite the pandemic, it’s projected renewables will account for some 90% of new capacity added globally in 2020.

So, does all this mean renewable energy plants will quickly muscle out fossil fuels? Not exactly.

Fossil fuels still make up the lion’s share of electricity production, and for now, the cost of building new renewable plants is not lower than the cost of operating existing fossil fuel plants. Also, the cost of solar power differs climate to climate and country to country—varying with regulations and cost of capital, land, and labor.

Naam says we’ll need better batteries (which appear to be on the way) and storage to keep the juice flowing when the sun is on the other side of the planet. Also challenging is the fact that solar peaks in the summer months, but electricity demand peaks in the winter.

“In Germany, for instance, solar power output in December is just 1/5 of the solar power production in June, even as electricity demand is higher in winter than summer,” Naam writes.

But for the sake of argument, what happens if recent trends continue?

The projections suggest that in the sunniest places—in other words, lower-cost—”building new solar would routinely be cheaper than operating already built fossil fuel plants” by 2030 or 2035. Meanwhile, by the later 2030s, the same could also be true for relatively expensive places like Northern Europe (at least, in the summer months).

Of course, projections are just that: Projections. They depend on how long observed learning and deployment rates actually continue. And Naam says prices could hit a floor as they encounter more immovable costs like the cost of land and other resources.

So, while solar is an increasingly powerful player, Naam says, it’s no panacea. Given the real world’s complexities, it makes sense to diversify. A low-carbon future likely belongs to a mix of sources, including wind, nuclear, and hydro. But whatever happens, it seems how we electrify modern life is changing fast.