David Welch: Today is my 1,377th consecutive day of chanting. Every morning, 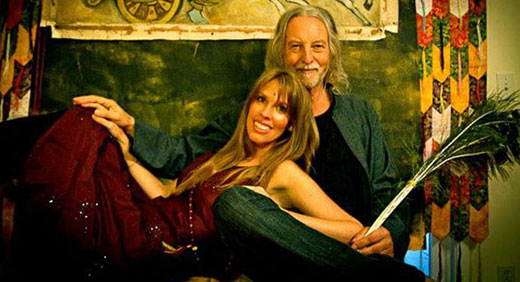 I do an hour and twenty minutes of Kundalini yoga and end up with chanting for 11 minutes. Can you talk a little bit about vibration of sound? Using Mantra to vibrate different glands such as the pineal and hypothalamus? Do you have some thoughts about that?

Deva Premal: Yeah, it’s very scientific and I don’t even…I haven’t dived into the scientific side that much because for me it’s been so much about experience, you know? And just the actual doing of it. So, you might know more than I about this. I’m sure you obviously do. One thing I’ve also understood is that even where the tongue hits the roof of the mouth brings certain connections in our circuits that are very powerful. And all these things are nice to know for the mind because we like to understand things and realize that…

DAVID: Guru Singh is one of my teacher, so he’s very good at explaining things in scientific terms.

MITEN: That’s great. And did you hear the CDs that he’s made?

DAVID: Oh yeah, I have them all. I have all yours too.

MITEN: But you know, we’re not really scientists or teachers in this thing. Like Deva said, we really connected somehow with the essence, and so, we like to feel the essence in different traditions also, but we can tune into whether it’s a Buddhist mantra or whether it’s a Hindu mantra or…you know, it doesn’t really matter to us, if we feel it. If we feel it, we just go there and trust it. And that’s been our way. We’re pretty much living life without a safety net,

DEVA. Like I said, we don’t have a base and we’ve been traveling for over 20 years now and we just share our movements, you know?

DAVID: Well, what are your experiences with doing all this traveling all over the world? Do you feel that the world is really in the process of awakening? I mean, the entire world rather than just pockets of individuals? Do you feel this is spreading?

MITEN: I feel the pockets of individuals growing. These pockets are growing. So, in that way, it’s spreading. But there’s a darkness to the world, also. You know, there’s a shadow on it and that’s the way it is and that’s also the way it’s supposed to be, I guess. It’s that somehow us humans are here to learn. To learn about issues and qualities that we’re just sensing but we haven’t really grasped yet, and we’re hoping that we don’t destroy ourselves before we grasp it as a humanity.

Individually, there are people who definitely we are growing as a family all over the world.  We played in five cities in Russia last year and every…for instance, in Moscow—we’ve been going to Moscow now for maybe four years and it’s built up to us playing in a rock stadium for 6,000 people, and we’re all chanting mantras, and we’re sitting in silence and we’re together as a sanga. And that’s not just in Russia; that’s all over. In Tel Aviv, in Ukraine, in… everywhere…you know, and so, yeah, when you go…

Look, you and I are the same generation, so we know what it was like back in the 60s and 70s…how this very delicate seed was just beginning to sprout all over the world and we were the carriers and the caretakers of that plant. And now, as we move into our age of our 60s and 70s, and whatever we see that the flower has taken root, and more and more all over the world, the fragrance of that flower is being recognized.

DAVID: It could be said that climate change and some of the troubles that Mother Earth is having right now is due to the masculine running amok. Society is too patriarchal. How do you see music helping to balance that out and bring the feminine, the divine feminine present, so that we can get this planet back in balance?

MITEN: Well, our way of…our small way of sharing the feminine in that way, in our concerts…and I go back to what I was saying even…wherever we play. We played all over the world now to at least 1,000 people per concert at least, and how the concert is an invitation and I choose the right moment for all the men to stand up and chant and sing this with me, so all the men stand up and what you recognize are two things; first of all the men are out of our comfort zone and they didn’t expect to be standing up with all the women sitting down, but…so what happens with that is, that is a feeling of out of your comfort zone—you’re more likely to be receptive in your feminine energy because you’re vulnerable. And when you chant you…the women, the female energy that’s represented by, let’s say, by the women there, they feel a sense of safety that the men are sharing their vulnerability, but at the same time the men are sharing their strength through their voices and so you have this beautiful moment when the men are just vulnerable but at the same time sharing their voices and singing with me and singing the chant and it’s such a…we get so much amazing feedback from the women and the…not just the women, the men too, because it’s a jump.

But that’s one way we work with sharing and helping men to feel their strength through their sensitivity and receptivity through their feminine. So that’s one way. The other thing that is also twisted is that we’ve come, as men, to feel almost too feminine and too sensitive and we can tip over into the spiritual world. And the women too, have lost their connection with their essence, their feminine essence, and they become more masculine and the balance gets a bit screwed and that’s one of the things we work with in our tantra/mantra workshops. Essentially, encouraging the men to really feel their masculinity and that takes awhile. It takes a lot of screaming and a lot of yelling and a lot of sweat and a lot of energy, but eventually we have a room of 40 men who really feel like they’ve connected with something of the roots of who they are as men. And at the same time they’re exposed to this because there’s 40 women, their partners, all sitting in the room supporting them. And then to flip that to the women to actually begin to own their essences as women in their feminine energy. Can you hear me? (Sounds like a raven or a cockatoo in the background). Do you hear the birds?

DAVID: Yeah. Is that a pet or wild?

DAVID: Is that a pet of yours or a wild bird?

DEVA: No, that’s just…in the tree…

MITEN: There’s a tree out there. And anyway, so yeah, of course, we have to…the problem with the planet is men, basically. We are a just full of not being able to deal with conflict other than fight and that’s a big problem. And that’s a challenge to find ways to meld into our feminine power and be seen as power and not as weakness. The feminine is.

DAVID: Would you be willing to take a stab at describing God?

Miten: This is right there you know. The feminine energy.

DEVA: God is anyway such a delicate…because it sounds masculine and it sounds so defined, you know? It’s like, one thing. Of course, that’s very misleading and I also noticed I like to call it God because it’s so simple to call it that. But it’s really…..one of my CDs is called “Love is Space” because I felt like it’s space…God is space. God is what connects everything. It’s like…and everything is included in it. It’s like air…it’s the breath…it’s invisible, but it’s everywhere and nothing would happen without it. It’s the divine or Godliness or Divine Essence. You can call it Great Spirit.

MITEN: In other words, you can call it Love.

DAVID: Do you have any practices besides music that you do…meditation, yoga or…?

MITEN: We learnt it in an ashram—the meditation Osho gave us in the ashram. Kundalini meditation and for 15 minutes to shake your body like Deva was saying…you know, it’s a nice feeling. You feel your feet on the ground and your knees are relaxed, they’re not locked, and your arms and your shoulders begin to relax, your neck, your wrists…and you just begin…and your pelvic area…and you just enjoy to shake for 15 minutes and then come to a silent space when 15 minutes is over and just enjoy what you’ve created without any effort. That was a great learning for me. It doesn’t have to be effort. So, after that, then the body is open and we do our stretches and then usually…the way our rituals are to drink organic lemon juice, hot lemon juice every morning after we wake up. So we have a glass of lemon juice Deva makes. Then she makes a smoothie which is definitely worth waking up for.

DEVA: Yeah, yeah. Actually, we also put apple cider vinegar, so we use both.

DAVID: That’s a good cleanser right, and then you go to the smoothie, which is?

DEVA: I mean, there’s a special way…it’s very beneficial to drink the lemon in the morning because it stimulates the system, also the digestive system. So, it’s basically a good way to wake up the body.

Read Part I About What It Means To Awaken.

Read Part III Awakening Means That I’ll Be Always In The Moment.