David Welch: We are in the process of interviewing our teachers to ask them about their lives to get useful information for our awaken community. 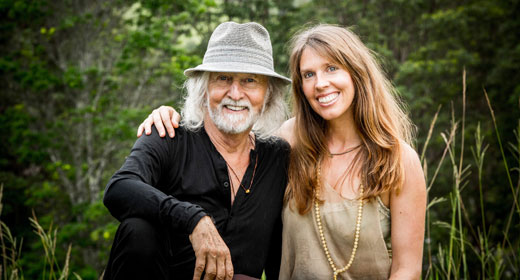 So, obviously the first question we need to ask is: “What is it to awaken?”

Deva Premal: I mean, it’s basically the illusion of separation fading away and I always thought it was kind of this roadblock. I always thought it was this kind of sudden moment when everything changes and everything is different ever after and I’ve somehow come to understand that actually, it is awakening. It is a process and it’s a lifting of the veil and I even have come to an understanding that awakening happens in different…it almost feels like it happens in different chakras, you know? Like, some people awaken in the heart and they become this kind of love…love generator, you know? And other people become awakened more in the higher chakras and they become more of an intellectual…not “intellectual,” but they have more of the gift of conveying the message in a verbal way.

DEVA: So somehow I….

MITEN: Some become awakened in their first chakra.

DEVA: Yeah, I don’t know about that (Laughter).

DAVID: Are we talking about Tantra here?

MITEN: That’s right. Well that’s very…it’s a very auspicious chakra of course. It’s our basic life energy, you know? So if we…that was Osho’s teaching…is that we needed to connect with our base chakra before, and really accept it and channel that energy up.

MITEN: Yes, Osho’s a teacher. Deva and I met in Osho’s ashram. So, you know, we met there about 25-26 years ago and…yeah, the awakening from…ironically, he was known as a sex guru, but he was actually helping us to channel that basic energy that we were all feeling as young Westerners and actually not to suppress it, but actually to work with it and to open the higher chakras to awakening. So, it’s quite a thing to address that first chakra when we’re talking about awakening.

DAVID: Well, I completely agree with you. Because there you have the masculine and the feminine, the God and the Goddess, which are the two halves of the whole and it’s those two coming together into oneness and then you both experience this oneness that you are, already. And, you know, it’s…to me, the most fun way of awakening…if you will.

DAVID: That would be my next question. How does music, in your own awakening, and how does music—your music—help us in our awakening? ‘Cause I know you have a particular kind of music. I mean, you’re focusing on music that I feel is really transformational. It really expresses the infinite in a way that is just palatable.

Miten: Well, that’s because the music was given birth to in an ashram. It wasn’t…the music wasn’t made to entertain anybody, not to get famous or rich. The music was based in supporting meditation, supporting awakening. That’s what it’s all about for us. So, we never looked away from that. That’s what the music has always been. It just was happening in an ashram and then when we left the ashram, we took it out and began to share it. We just watch normal people respond to it. You could feel the thirst for awakening. And you could feel the thirst. We still do. We play all over the world and you can just feel…it’s palpable—is that the word?

MITEN: It’s tangible anyway. It’s drinking in the healing power of the mantras and the music and coming to a silent space of awakening. Every concept…that’s where we begin and that’s where we conclude. So, music is very important and it’s also…you know, we have the gift of Deva’s voice, which is a conduit in itself.

DEVA: Also we play and sing it for ourselves. We are going deep within ourselves by the chanting and singing, so that’s why the direction of the music is to go within. It’s not directed at the audience or at a goal on the outside, you know? That becomes like a channel that brings everybody inside who is ready to come into it. And it’s really very participatory. That’s the key, you know? It’s like, its something that invites you. Even with the CDs, you’re invited to either sing and chant with the CDs, or to sit in silence. It somehow, for some magic reason, for which we are very grateful for, is that the recorded music also really has the transmission.

We get many emails and feedback from many people who, through the music, have found joy in their lives, you know?…have turned around from considering suicide and very strong and very powerful, challenging situations, and the mantras have ignited the spark again, have brought a sense of gratitude or joy or light back into their lives. We’re just very grateful that we can share this because we love it so much and it’s so beautiful to feel the connection with the people all over the world who are ready to come into that space. And it’s beyond words, which is so nice, You know? It’s like, beyond explanation, beyond answers.

MITEN: I think that’s the thing. It’s beyond…when you play music, it takes us beyond. It’s another voice speaking of a something we can’t articulate verbally. And we are…what we’re doing with the mantras is…we’re already, the content is already incredibly powerful because we have these 5,000-year-old healing modalities that have been scientifically discovered and used through the ages and so, once you have that as a content and you’re not singing an emotional song about love…or, separation…or, I love you baby…where were you last night…or, whatever, you know?

You’re actually carrying something of incredible power and then you approach that sound or those sounds in a very sensitive way so that the music that you use to accompany that, and Deva’s voice to carry it, is a very powerful tool and we really don’t take much credit for it. It’s been given to us. We’ve been blessed to carry it and we feel like we’re messengers, you know? And that’s what’s taken us all over the world.

DAVID: How would you define mantra? What is a mantra?

MITEN: Well, I mean, maybe a…Dear, would you like to define that?

DEVA: Yeah, a mantra is a very specific sound that us humans can make with our mouths, with our instruments that we have, that comes closest to a divine sound that creates a certain effect in either the body, and our metaphysical bodies, and our emotions, and our connection to different qualities, you know…love, compassion, peace. These sounds are like direct channels into enhancing these qualities and direct connections, so it’s very scientific.

You know, it’s beyond Sanskrit, it’s beyond Hinduism, it’s really actually just a sound and now we have kind of packaged them into a language and into relating them to certain Gods and Goddesses but that all came later. That came later to help us understand and remember and also to make them more human and also to be able to relate to them better.

DEVA: That’s the religion coming in and…but it’s like medicine, you know? It’s like having a pill where we don’t understand every ingredient—some people do, but most of us don’t and we trust that the pill is going to work because if we take it and something happens. So these are like the mantras…are like the sound medicine which somebody in a very advanced state has realized that these sounds have this particular effect. Now we can use it and then realize for ourselves: yeah this really works for me, and really feel different when a chant is every day or when a chant is 108 times in a row, or you know….

MITEN: That’s one of our things, is to encourage people to make a commitment to actually research…look for your mantra. We made some CDs that are specifically meant to support your mantra practice. One was called “Mantras for Precarious Times” and the other one was called “Mantras for Life” and it’s Deva chanting a series of mantras, 108 cycles which is the amount…apparently this is the amount of cycles you have to do to energize what they call the Nadis.

In Vedic scripture, they call them Nadis and there’s 108 Nadis in our bodies and these become charged after 108 cycles. So, our suggestion for people is first of all, research and look at these CDs, find one mantra that…like David was saying, that you relate to or resonates with you…whether it’s, for instance, removing energetic blocks from your body or removing energetic blocks in your life…or a mantra for sacred love making. There are all these different modalities that you can tune into and then what you do is you put the CD on and you…every night before you go to sleep, you chant your mantra with Deva. You commit to 21 days and then you begin to see what happens. You begin to make friends with these sounds and they start to resonate and you start to carry them with you and that’s where it gets to be good, it gets to be really good.