Bare Facts Of The Sauna In Finland

by (Finland): Just say yes: If you want to get to know Finnish culture, don’t be intimidated by the sauna. With our beginner’s guide, there’s nothing to it… 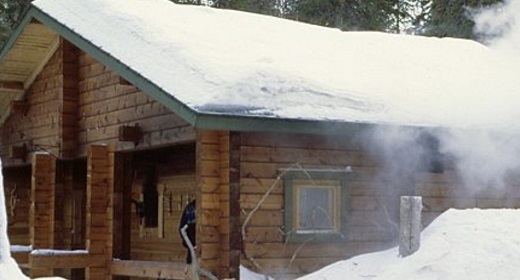 How should a visitor to Finland react to the following proposition?

You are invited to take off all your clothes and go to a little room heated to almost 100 degrees Celsius, where you will sit, naked, with others for a while and sweat. Then you will go outside and jump (still naked) through a small hole in the ice on a lake, the sea or whatever and refresh yourselves in the freezing water – or roll in the snow instead.

In short, “What about a sauna?”

The answer should be simple. Be courageous and say “yes” – because if you don’t you will miss a deliciously relaxing experience which will provide a vital insight into the culture and mentality of your Finnish hosts.

Saunas have existed in other cultures, but it is in Finland that they have become entwined in the national culture. In days gone by, they were the most practical place to wash during the long winters when there was no running hot water. You can still find people in Finland who were born in the sauna. Not when it was heated, of course, but it was a sterile place where hot water was available.

It is estimated that there are two million saunas in Finland, for a population of 5.3 million. Big companies and state institutions have their own saunas. The president has an official sauna, as does the prime minister. They are to be found in city apartments and in country cottages.

Traditional saunas are heated by wood, burned either in a stove with a chimney, or by a stove with no chimney. The latter – a smoke-sauna – is the original sauna and believed by most Finns to be the best. The door is closed after the wood has burned down (and most of the smoke has escaped), leaving the embers to heat the sauna to the proper temperature, but giving a soft heat and the aroma of woodsmoke.

All saunas have a basket of rocks heated by the stove on which to throw water to increase the humidity. Called löyly in Finnish (for pronunciation, contact your host), the steam increases the feeling of heat and makes you sweat.

Basic etiquette in the sauna is quite simple. You first take all your clothes off – something you have to try not to be shy about. It is considered polite to shower before going in. Otherwise, there are few rules. Stay in as long as you feel comfortable, and return to the sauna several times if you wish.

When you come out of the sauna, jump into a lake, or roll in the snow. Or – and this will be the case for most foreign visitors – simply take a shower. But if you do roll in the snow, make sure it is fresh and powdery: old, icy snow can have an effect on your skin like sandpaper.

In summertime, you may also be handed a vihta – a bunch of birch branches which you dip in water and with which you then gently flagellate yourself. This is not as kinky as it sounds – it stimulates the circulation and gives fresh aroma.

In some hotel saunas the tradition of the washing-lady survives. She takes care of washing you; don’t be shy.

An invitation to sauna from business contacts you have never met before is perfectly normal. If you want to take the initiative yourself, almost all hotels have good saunas, though mostly heated by electricity.

I once took three American journalists to a sauna in a big hotel. The men were a little bit shy so we decided they could keep their swimming trunks on. In the middle of a good löyly, the door swung open and a large old Finnish woman entered the room. She simply pointed at the first, horrified American and said bluntly: “You first, underpants off.” I had forgotten to tell them about the washing-lady.