David Welch: Are you vegetarians or vegans?

Miten: Yeah, Deva has never tasted meat or fish in her life. 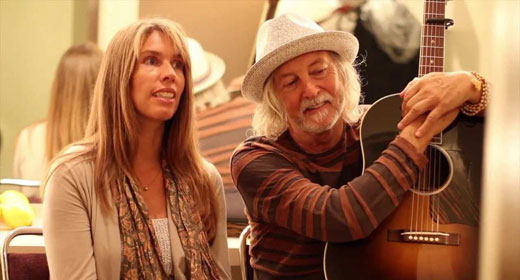 Miten: Yeah, she never tasted it. Of course, I have, but I haven’t eaten meat or fish for over 40 years now. So you know, sometimes she says to me what does fish taste like…well, then she says, “don’t tell me.”

David: Did you tell her, “it tastes like chicken,” right?

Miten: Yeah, so we haven’t…we don’t like…and that’s one of the things traveling…Deva always has good supplements and you know, we take with us bags of roasted seeds that Deva roasts, and cooks it with tamari and it tastes so fantastic. So we have plenty of good fruit and things like that. We always have backup. You know, you don’t always…you don’t take it for granted. The world is definitely more friendly toward vegetarians now than it was.

Miten: In airports, you can usually…now we can…you still find you can only get cheese and ham sandwiches or something which we don’t, of course, go for. But mainly now you can find something vegetarian at the airports. In fact, when we were in Eastern Europe, we were amazed at the amount of vegan restaurants. Very hip, very cool vegan restaurants.

Miten: People very turned on to it.

David: What would you say your life purpose is?

Miten: Well I think, personally, somehow I found my way to Osho and I was in a very vulnerable place and I…before then, I had always felt like I was looking at the world from the place of an onlooker. I felt like life—even though I was involved in playing music and quite successful and every thing—I still felt like an onlooker in life. When I came to Osho, I suddenly found myself in the center of my life and that was an incredible understanding. And the music I was given through Osho…because when I came to Osho the last thing I wanted to do was to be labeled as a musician. I felt like I carried that cross long enough, so nobody knew that I was a musician and it took me a good while before I felt healed enough to pick up a guitar again and to express myself through music. And Osho gave me the music and he also gave me the vision of being able to share something of the life that I had found through music and my purpose.

And then I met Deva, and Deva brought mantras into my life in a way that I hadn’t recognized before. I did sing mantras in the ashram, but I didn’t realize what they were until I met Deva and now my purpose is to share. I feel like I have a responsibility to continue to do this. I’m going to be 70 in 2017 and you know, we’ve traveled to like 25 countries in a year and they’re like concerts almost every other night. We have a road crew, we have a team of people that are crazy enough to want to be out there with us and my purpose is to share what I’ve learned in my life, you know? And to share it through music and with Deva.

Deva: Yeah, I do a little yoga but I wouldn’t call myself a yogi. I do some yoga. I’m not like a very strict…you know, with a practice. But I’ve come to enjoy over the last years…is actually something very simple: it’s shaking. It’s really just been so helpful with our energy and with…it’s like a chi-generating exercise and it’s just shaking in the morning after getting up for 15 minutes. Just shake your body, you know? Just with the feet firmly planted on the ground and then just shake. Let your body do what it needs to do. Sometimes it’s vigorous, sometimes it’s almost like a tremble or something.

Miten: You can use music.

Deva: Yeah, you can use music…it makes it nice, also. And it’s so powerful and so immediate—even five minutes of it makes a whole difference, you know? So, we’ve been actually sharing that in our groups and workshops and telling people because it’s something we can always do, without any problem. Anyway, you can shake for a few minutes, but 15 minutes is great.

David: So, just to finish up, is there anything that you feel you would like to share with our readers that we haven’t actually covered yet? Is there any advice or words of wisdom that might be helpful? Or…. What do you guys think about the present moment, you know, Eckhart Tolle and Ram Dass, about being here, now. Is that kind of some of what you got when you were with Osho, or was it actually to just be present?

Deva: Yes, that’s all, I feel, in a nutshell…that’s Osho’s teaching and he had so many different ways of helping us be in the moment. His meditation techniques—they were always…well, they’re all designed to help us be in the moment. So, it’s…that’s why it’s called practice…because it’s a never-ending practice. That’s what I’m kind of wondering, like, awakening means that I’ll be always in the moment without being distracted. I kind of have stopped waiting for that now. I used to kind of wait for enlightenment.

Miten: Because waiting keeps you out of the moment.

Deva: Yes, so now I’m just enjoying the moment, which is good.

Miten: You know, it’s easy to enjoy the moment, right now, where we are, and the way we live.

Deva: I really, literally, do enjoy every moment. I feel very blessed to have a life like this where I feel…even I’m happy to be in an airport waiting for the airplane. Usually it’s one or two hours or something, but I just really…I’m just so grateful for this life that every moment is enjoyable and there’s not something I wait for to be over.

David: Right, or waiting for it to begin, some time in the future. It’s right here, right now.

David: This is perfection.

David: Alright, I really, really appreciate your time. I feel that you’ve had a lot of valuable information and you were very vulnerable and very present and I feel it will really be very helpful to our readers. Just want to really thank you and when you come into L.A., I’m going to be sure to be there and meet you guys in person.

Deva: You live in LA?

David: Well, part of the time in Los Angeles, and I have a farm in Tennessee. The land is at the end of a dead-end road and surrounded by thousands of acres of forest with eagles flying over. I look outside and I see 45-50 wild turkey or deer at the salt lick, you know, with baby deer bouncing around or a rabbit going by. So, I just feel really grateful. I often go, Dear Goddess, how did this happen? You know, that I’m so lucky to be here, surrounded by nature, you know? It’s so obvious when you’re surrounded by nature of the beauty…of heaven on Earth.

Miten: You know, it’s funny, I was just thinking that, when we played in Kiev and the Ukraine. We were invited by these politicians to these, to come to these conferences and talk about mantras and one of the questions they said was…you know, like, “Yeah it’s all great, but how could I take a mantra out to East Ukraine and what good would that do out there?” And we were saying that it’s not that mantras that are going to save humanity collectively, but what they can do is, they can change the individual and that’s where we focus on, so that it’s a ripple effect, and you and your ranch and when you move into the world you take that energy with you and that’s the ripple effect, and that’s all we can do as individuals.

So we are the blessed ones, you in Tennessee and us in Byron Bay. We have a responsibility, you know? And all of us Westerners do really, although in Europe, now it’s getting very intense with the situation with the refugees, and it’s become even more obvious that we have to open, we have to embrace humanity as one family and we can’t hide from that much longer because it’s right in our faces. So yeah, you thank the Goddess for your beautiful life, David, and I’ll do the same. Keep singing!

David: Thank you so much. God bless you both.

Deva: Thank you, David. Great to see you.

Read Part I About What It Means To Awaken Here.