How To Be Bored

by Shayla Love: Boredom doesn’t feel good, but it isn’t necessarily a bad thing. Understanding it can help resist the urge to run from it… 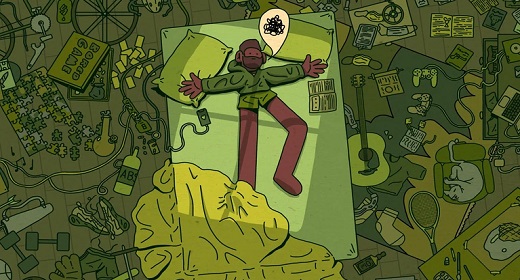 In the 1930s, a professor of psychology at City College of New York, Joseph Barmack, ran a series of experiments on the psychophysiology of boredom. He wanted to understand how factory workers dealt with the monotony of their labor, and how to prevent the listlessness or fatigue that came along with it.

He brought some college students to the Applied Psychology Laboratory at Columbia University to do a boring task, while measuring variables like blood pressure and attention. Oh, and he also gave them amphetamines.

He found that the drugs decreased the “unfavorable attitude” that people normally felt when doing something incredibly boring. In another experiment, he discovered that money also helped.

Barmack is part of a legacy of humans who have mused about boredom for thousands of years, noting the unpleasantness of the emotion, and what—if anything—there is to be done about it.

The Roman philosopher Seneca captured the restless, fussy, feeling of boredom as far back as the first century CE, writing, “How long the same things? Surely I will yawn, I will sleep, I will eat, I will be thirsty, I will be cold, I will be hot. Is there no end?”

If you turn to literature or philosophy, you can find, alternatively, boredom considered a personal, moral, or societal failing. In the essay “On the Vanity of Existence,” philosopher Arthur Schopenhauer wrote that boredom “hovers over every secure life like a bird of prey,” and that boredom proved that life was meaningless since it was “nothing other than the sensation of the emptiness of existence.”

Today, in 2020, in the midst of a pandemic, many people have forged a new relationship with boredom. “This has been the year of boredom,” said Josefa Ros Velasco, a postdoctoral researcher studying boredom in elderly people at the Department of Philosophy and Society at the Complutense University of Madrid, and who recently set up the first International Society of Boredom Studies.

If you’re not facing the pandemic head-on as an essential or healthcare worker, you’ve been asked to stay at home, reduce travel, and restrict seeing families and friends for holidays. Even though the first doses of the vaccine have been administered, for many of us, boredom will be a necessary part of protecting public health well into 2021.

Yet James Danckert, a professor at the University of Waterloo in cognitive neuroscience, thinks that we’ve trivialized just how powerful boredom can be, dismissing it as something children whine about to their parents. In a recent preprint, Danckert and his colleagues found that people who are prone to boredom break the rules of social distancing more often. Previous research has also found that prolonged boredom is associated with pretty bad outcomes, like depression, anxiety, gambling, dropping out of school, or risk-taking and impulsive behavior.

During the pandemic, there’s been a push to rebrand boredom as a state that unleashes creativity and productivity, as writers and editors became aware that people were facing more boredom, and wanted to showcase its positive qualities. In just a few examples, one Guardian article titled, “Why It’s Good to Be Bored,” described this year as a “boom time for boredom.” “How Boredom Can Spark Creativity,” the BBC wrote in May. “Boredom might spark creativity because a restless mind hungers for stimulation,” wrote Wired. The Harvard Business Review espoused “The Creative Benefits of Boredom.”

Is boredom good—a spark that ignites the creative spirit? Or bad, a pressure that we can break from, and violate public health guidelines, endangering our communities?

The latest research understands boredom as a signal that what you’re currently doing isn’t meaningful to you and doesn’t grasp your attention—it’s a neutral signal. Boredom doesn’t directly cause good or bad things to happen, though there are certain personality traits or environments that might make a person more prone to boredom, and to riskier responses to boredom.

Understanding boredom as a benign signal can better help us resist the urge to run from feeling it. We might best know how to be bored once we understand what boredom really is.

Danckert and his colleagues’ recent paper on social distancing behaviors called for boredom to be looked at seriously as a motivator of actions—in this case, actions that can threaten public health.

As Kendra Pierre-Louis wrote recently in Elemental, people more prone to boredom spent less time in social isolation, were more likely to have hosted social gatherings, and more likely to have had more social contact than recommended. During the SARS outbreak in 2003, a survey similarly found that people reported boredom to be the biggest disincentive for complying with quarantine regulations.