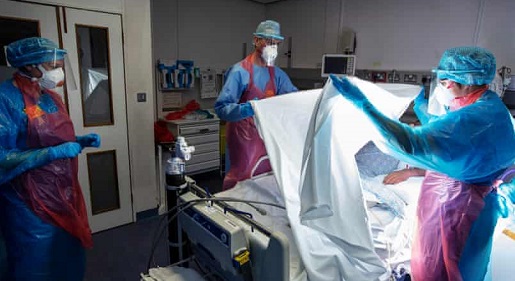 British scientists are trialling a new drug that could prevent someone who has been exposed to coronavirus from going on to develop the disease Covid-19, which experts say could save many lives.

The antibody therapy would confer instant immunity against the disease and could be given as an emergency treatment to hospital inpatients and care home residents to help contain outbreaks.

People living in households where someone has caught Covid could be injected with the drug to ensure they do not become infected too. It could also be given to university students, among whom the virus has spread rapidly because they live, study and socialise together.

Dr Catherine Houlihan, a virologist at University College London Hospitals NHS trust (UCLH) who is leading a study called Storm Chaser into the drug, said: “If we can prove that this treatment works and prevent people who are exposed to the virus going on to develop Covid-19, it would be an exciting addition to the arsenal of weapons being developed to fight this dreadful virus.”

The drug has been developed by UCLH and AstraZeneca, the pharmaceutical company that has also, along with Oxford University, created a vaccine that the Medicines and Healthcare products Regulatory Agency is expected to approve for use in Britain next week.

The team hope the trial shows that the cocktail of antibodies protects against Covid-19 for between six and 12 months. Trial participants are receiving it as two doses, one after the other. If it is approved, it would be offered to someone who has been exposed to Covid in the previous eight days.

It could be available as soon as March or April if it is approved by the medicines regulator after it has reviewed evidence from the study. The trial involves UCLH, several other British hospitals and a network of 100 sites globally. This month University College hospital became the first site in the world to recruit patients into the randomised control trial and give them the jab or a placebo.

“To date we have injected 10 participants – staff, students and other people – who were exposed to the virus at home, in a healthcare setting or student halls,” said Houlihan. She and colleagues would closely follow the participants to see which of them develop Covid-19.

The immediate protection that the drug promises could play a vital role in reducing the impact of the virus until everyone has been immunised. The vaccination programme is under way using the Pfizer/BioNTech jab and is expected to take until next summer.

NHS England accelerated the vaccine deployment this week after criticism from hospital bosses, GP leaders and the former health secretary Jeremy Hunt that it was taking too long.

“The advantage of this medicine is that it gives you immediate antibodies,” Houlihan said. “We could say to trial participants who have been exposed: yes, you can have the vaccine. But we wouldn’t be telling them that would protect them from the disease, because it’s too late by then [because the Pfizer and Oxford vaccines do not confer full immunity for around a month].”

Paul Hunter, a professor of medicine at the University of East Anglia who specialises in infectious diseases, said the new treatment could significantly reduce the death toll from Covid.

“If you are dealing with outbreaks in settings such as care homes, or if you have got patients who are particularly at risk of getting severe Covid, such as the elderly, then this could well save a lot of lives. Providing it’s borne out in phase 3 trials, it could play a big role in keeping alive people who would otherwise die. So it should be a big thing,” he said.

“If you had an outbreak in a care home, you might want to use these sorts of cocktails of antibodies to bring the outbreak under control as soon as possible by giving the drug to everybody in the care home – residents and staff – who hasn’t been vaccinated. Similarly, if you live with your elderly grandmother and you or someone else in the house gets infected, then you could give her this to protect her.”

The drug involves a long-acting antibody combination known as AZD7442, which has been developed by AstraZeneca. Rather than antibodies produced by the body to help fight an infection, AZD7442 uses monoclonal antibodies, which have been created in a laboratory.

In documents on a clinical trial that AstraZeneca has registered in the US, it explains that it is investigating “the efficacy of AZD7442 for the post-exposure prophylaxis of Covid-19 in adults. The Sars-CoV-2 spike protein contains the virus’s RBD [receptor-binding domain], which enables the virus to bind to receptors on human cells. By targeting this region of the virus’s spike protein, antibodies can block the virus’s attachment to human cells, and therefore is expected to block infection.”

In a separate trial, called Provent, UCLH is investigating whether the drug could also protect people with compromised immune systems, such as those undergoing chemotherapy for cancer, who have recently been exposed to the virus but have either not had a vaccine or in whom it has not resulted in immunity because of their underlying condition. Both the Provent and Storm Chaser trials are now in phase 3.

Dr Nicky Longley, an infectious diseases consultant at UCLH, who is leading the second study, said: “We will be recruiting people who are older or in long-term care, and who have conditions such as cancer and HIV which may affect the ability of their immune system to respond to a vaccine. We want to reassure anyone for whom a vaccine may not work that we can offer an alternative which is just as protective.”

Both trials are being undertaken at UCLH’s new vaccine research centre, which is funded by the NHS’s research arm, the National Institute for Health Research, and led by Prof Vincenzo Libri.

Dr Richard Jarvis, a co-chair of the British Medical Association’s public health medicine committee, said: “For the vast majority of the population, vaccination offers the best protection against Covid-19, and NHS staff are working around the clock to administer this to as many vulnerable patients as possible in this first rollout wave.

“It’ll certainly be interesting to see if these trials are effective. But it’s important that any new treatments are thoroughly researched, scrutinised and, most importantly, safe before we consider introducing them.”