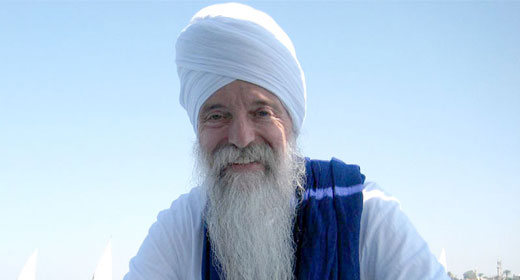 DONNA: I’m well and I would like to say…just on a personal level, that I’m delighted and honored to be having this time with you and I want to thank you on behalf of Awaken for sharing your time with all of us.

GURU SINGH: I couldn’t be a thinking of a better name for a website to be sharing my time with, than Awaken.

DONNA: And I would also like to say that it’s been an honor to call you my teacher for over ten years now, so this is very special for me.

GURU SINGH: Wonderful. Yes, the specialness goes in both directions!

DONNA: Well, for those that may not know Guru Singh, he is the author of many books and CDs, including Buried Treasures, Infinite Zero, Levity, A Year of Prayer and the first one I read, which was Angels Gather Here,which I used to take with me on trips because you can read it in little bits…you don’t have to go cover to cover and it can be inspiring and empowering no matter where you open up to. And I think I probably missed a few titles because you’re so prolific. I don’t know how to keep up!

GURU SINGH: Well, I’m of the Mark Twain version of writing and that is, he would say he must write every day, but no more than a couple hours every day. Writing is not a job you do all day long because a lot of writing is embedded in the experiences you’re having, so you’ve got to leave the time available to have all your experiences and then give yourself that module of time to do the writing in.

DONNA: – It’s inspiring nonetheless! Well, this interview is for Awaken.com as you know, and I was reading parts of the conversation that you had with David about awakening and what awakening is and this paragraph stood out. So, if you don’t mind, I’m going to read it and then we’ll talk about it a little bit more.  This is what you said about awakening…

“In the simplest terms, awakening is a spectral process. There is a spectrum of being awake, being slightly awake, being moderately awake, being quite awake, being extremely awake and being you know…fully awake. Whether being fully awake in this moment will achieve the same result as the next moment, is the key to the definition, in that, awakening is not a condition; it’s a process. A replacement word is enlightenment which has now become a cliché. So, awaken and enlightened are synonymous with each other.”

DONNA: You know, this really caught my attention, Guru Singh, because you’re talking about the stages of enlightenment and I would like to ask you, What does it mean to be slightly awake? What does that look like? What does it feel like? What would be an example, if you don’t mind?

GURU SINGH: One of the things that the Buddha said, was that existence is suffering. And it wasn’t that existence causes suffering, or that there can be suffering in existence. It was that existence is suffering and in the lower levels of that spectrum of being awake, there’s a lot of bliss, a lot of fictionalized pleasure because ignorance is bliss and in those lower realms of awakening, in those lesser realms…and I’m not using these as terms of hierarchy…I’m just using these in terms of condition…the condition of being slightly awake is still a condition of ignorance because being slightly awake means you’re mostly asleep and that means that you have the capacity to ignore (which is what ignorance is) a lot of the signals that are being transmitted constantly in our cosmos, on our earth, in our environments, in our neighborhoods, in our homes, within our own psyche.

And so as you move through the spectrum of that awakening process, you get to a place where you begin to suffer because you’re awakening the system to sense the what is and for the most part, in the world, such as we have constructed today, that what is isn’t working. The environment isn’t working, the economy is only working for a few, religion doesn’t really explain…it expects, politicians don’t represent, they present. So many of the conditions that are supposed to be one way are in fact quite contrary to that and so, ignorance ignores the what is…ignores the dichotomies, the dualities, the contradictions. But as you begin to awaken more, you become more and more aware of the dichotomies, the dualities, the contradictions, the corruptions, etc.

For example, children…little children, if they didn’t experience the challenges that come from not being able to walk, they would remain crawlers. Because crawling around is very comfortable. And usually when you’re crawling, you’re on rugs or what have you. So not only is it comfortable but it’s cozy.  And standing up and walking is dangerous. You fall down, you hit yourself, you go through these processes. So what stimulates a child to learn to walk…to learn to understand the nature of balancing, is the fact that other people that are walking gain tremendous advantage over them. And so, they go, “well…it’s more uncomfortable to be taken advantage of by all these people who are walking, than the discomfort I will experience through the test and trials I will go through in learning to walk.”

And so, that’s the next stage that one has to get to and that is that you are aware of what’s going on around you and it’s uncomfortable. In that range in the spectrum, in which you’ve achieved some awareness but you haven’t achieved any antidotes…and then, if you don’t give up and fall back and quit and go back to ignorance, you pursue forward. You begin to become acquainted with the alternatives…you begin to become acquainted with the antidotes and what these are going to give you is, these give you that ability to deflect the impact of the pain of those things in your world that you’re becoming extremely aware of.

And so, that spectrum is a great challenge and not everybody in any given lifetime makes it through the spectrum, and so, what we have is…we have the advent of many lives and I loved what Yogi Bhajan said, when somebody said, “Well, what if I don’t really believe in reincarnation?” and Yogi Bhajan said, “That’s not a problem…it happens anyway.”

DONNA: You know, I’m thinking about this process that you’re describing about becoming more aware of alternatives and the advantages these alternatives have, like standing…and of course, using that as a metaphor for all of us…it means, seeing the contradictions in life, but wouldn’t you say it also has to do with finding within ourselves the empowerment to choose the courage to say, “hey that’s a contradiction…I can do better than this!”… on a personal level, as well as politics and the things that affect us on a communal level? At least, I found that in my own life.

And that is part of the process that takes place in the middle to upper regions of that spectrum of awareness…of awakening, to use the word of this website. That is, the more you awaken, the more you realize that is your ability to respond, which is your responsibility. It is your ability to respond to the circumstances that surround you, that give you that authority…that give you that right to stand up, not only in your physical, but stand up in your emotional, stand up in your psychological, stand up in your spiritual and then you start to learn to stand up for others….you know, which is one of the paths of the warrior. The warrior and the sage—you know, the two components of that wholeness.

DONNA: And it seems like in this process…those of us who are on a journey…I guess we’re all on a journey, even if we don’t acknowledge it, per se, but it seems that it is fraught with challenges and some practitioners call it a “dark night of the soul.” Do you think that’s a necessary part of this process of awakening? Does it have to be painful?

GURU SINGH: Yes, it has to be painful, just like birthing is painful, you know? It’s not that it has to be painful because you know, everybody tries to create, you know, a higher reason for the pain and you know that has validity…that has value because it gives you a sense that it’s not fruitless, right? That when you’re going through the pain, there’s a reason for the pain…and there’s not necessarily a reason for the pain. Sometimes the pain is caused by a resistance to the growth. And a resistance in any moment is going to cause friction, and friction, if it builds up enough, is going to cause inflammation…and inflammation is the root of pain. If you were to think about it, birthing, and you being a mother, have given birth…the cervix and the womb have to be able to contain the pregnancy during the process of gestation. It can’t just…you know, be so open that the baby just falls out at 3 months, right? And so, it has to have this guarantee that it’s going to hold the infant within the womb until the infant is ready to be born and that requires a lot of different mechanisms. It requires muscle, it requires tissue, it requires bone, it requires all of these things that are going to be involved in holding and supporting that child within the womb.

Then it comes time to be born, so think of any awakening as the same thing. Something has to be held inside and it’s time to be born, so it has to somehow, pass through, break through, dissolve through the hole, the containment. In the case of a child being born, it’s actually a very painful process for the child and the mother and I speak as a man never having known that. And so I can only speak of it because I know of it. not because I’ve experienced it. And the way that the child and the mother exit in that process is, they both give in some. They both surrender some. The mother’s body surrenders and she opens up and the child’s body, that is, the infants body surrenders and it begins to collapse down. And the combination of the opening and the collapsing allow for this body, the size of a newborn baby, to pass through this opening that is not anywhere near that size. And that coordination and cooperation is part of what takes place in our conscious awareness—we’re having to give up old standards…old values…in order for us to be awakened into the new. The new is unknown to us and so we’re hesitant to pass into the new. We have to surrender something.

We have to dissolve something, we have to open something. So there’s that same birthing process into the moments of our awakening. And that same friction and pressure and inflammation are going to take place. And so, yes, the process of growth and the process of awakening is by nature a painful process. And that’s one of the reasons why there’s that saying that “happiness is our birthright,” and people often times try to replace happiness with pleasure. Pleasure is something you can acquire. Happiness is something that you must ignite…you must blossom inside yourself. It can’t be purchased from the outside and it’s not an easy process to go through or to achieve.