Here’s How Scientists Want Biden To Take On Climate Change 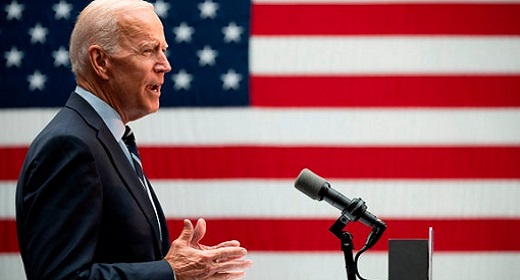 For the past four years, climate experts have watched with dismay as Donald Trump’s presidential administration has systematically weakened climate regulations, bolstered the use of fossil fuels that drive rising temperatures, and sidelined government climate science and scientists. These actions have combined to set the country behind on the crucial work of reducing greenhouse gas emissions to keep the worst impacts of climate change at bay—and of protecting vulnerable communities and ecosystems.

The election of Joe Biden has changed the prospects for action. The former vice president ran on a platform that included specific, ambitious measures to tackle climate change, including rejoining the Paris climate agreement (which the U.S. exited on November 4) and setting a goal of net-zero carbon emissions by 2050. Climate scientists and environmental advocates have applauded these goals but warn that it will take substantial work to reach them. Among other things, the Biden administration needs to help transition U.S. energy systems, gird against future damage from climate-fueled disasters, and make sure policies incorporate considerations of equity and justice.

To gauge what specific actions climate scientists want to see taken, Scientific American reached out to researchers who work in a variety of areas and asked them to answer one question: What is the most important action you want to see the Biden administration take to address climate change? Below are their answers, lightly edited for style and grammar.

Aradhna Tripati, climate scientist and founder of the Center for Diverse Leadership in Science, University of California, Los Angeles

Like COVID-19, climate change amplifies systemic injustices and disproportionately harms Black, brown, Indigenous and low-income people. The most important action for a Biden administration is to implement a systemic set of reforms to support climate justice. We don’t have time to wait. Communities throughout the U.S. have experienced climate disruptions made worse by political inaction. Since 1980 there were 279 events that cost more than $1.8 trillion. These disasters cost the U.S. in dollars, but they cost many people their health, homes and jobs. In doing so, they leave scars on families and communities and threaten to further fragment society.

Systemic reform for climate justice includes subsidizing the clean energy transition and green infrastructure for low-income communities while investing in green jobs training in these communities. The most heavily impacted communities must be supported to work with partners in developing and implementing resilience plans tailored to their own needs.

The Green New Deal must be emplaced while ensuring that communities of color and low-income communities benefit from the social and economic opportunities of addressing climate change. Representation at all levels is critical. Biden needs to create a national coalition that supports higher education for students from these communities as emergent leaders who will generate ethical and innovative solutions and act as engines for reducing economic inequality.

The transportation sector is now the largest source of our carbon emissions. And our infrastructure choices and pollution have long been sources of injustice and inequity. The next transportation system has to be different, and it can be. This isn’t just about scaling up public transit, which we’ll need to electrify and scale up by about a factor of five or more. This isn’t just about encouraging the rapid construction of accessible communities, safe streets for bicyclists and pedestrians, and widespread deployment of green infrastructure, all of which are needed at large scales. This isn’t just about replacing a legacy fleet of gasoline vehicles with electric vehicles (EVs), although there are about 250 million cars and trucks in the U.S. that can stay on the road for 15 to 20 years or more. It’s all of these, at scale, at the same time. An “EVs for clunkers” program is necessary but not sufficient. We need an “equitable clean mobility for clunkers” program that enables a rapid and just transition to a clean-energy economy. It’s doable, and more importantly, it’s necessary.

There are the obvious things, like rejoining the Paris Agreement and setting ambitious targets for fuel efficiency and other things you will find on the top 10 lists of executive action on climate. But to be honest, I’m most excited that science will once again be the guide to policy across the entire federal landscape, given that climate and energy policy touches so many aspects of our lives and our economy. In particular, I’m eager to see the speedy removal of a number of leaders in key positions who are openly hostile to climate science. It seems clear that efforts to undermine any progress on climate change will continue until Inauguration Day—and likely beyond. Lastly, while everyone is rightly focused on reducing future emissions and the harm they will bring, I hope that the new administration adopts an aggressive program to assist communities that are already reeling from climate damages today. Investments in accelerating the science of climate resilience will reap dividends in the coming years and decades, especially when that work is grounded in advancing climate justice.

President-elect Biden’s publicly released plan to address climate change is, by far, the most ambitious proposed by any American president or president-to-be. Achieving net carbon neutrality in the U.S. by 2050 would represent a tremendous success after decades of delay and inaction at the federal level. Just as important is the campaign’s stated commitment to climate adaptation—taking action to reduce the societal impacts from the increasing extreme weather events scientists know are inevitable over the next few decades. The campaign also emphasizes the need to ensure these climate mitigation and adaptation activities proceed in an equitable way that promotes environmental justice and in a manner that leaves no one behind—both of which are also critically important considerations. In my view, this is a plan well matched to the huge magnitude of the crisis we’re facing.

That’s the good news. The not so good news: it’s unclear how much of this ambitious climate plan will actually be possible to implement in the current political environment. It seems likely that the Biden-Harris administration will almost immediately take a series of executive actions to reverse many Trump-era policies that stalled or reversed progress on climate action—such as rejoining the Paris Agreement, replacing the many Trump-era political appointees who have been openly hostile toward climate science and attempting to use the existing regulatory authority of certain agencies, especially the Environmental Protection Agency, to achieve some modest emissions cuts.

But large-scale legislative interventions—which will be absolutely necessary to make substantial progress toward net carbon neutrality by 2050—will require congressional approval. Without Democratic control of the Senate, passing any substantive climate legislation will likely be a very steep uphill battle. The now very conservative U.S. Supreme Court, too, may become an obstacle to even some forms of executive action or agency rulemaking, given the expectation of major court challenges.

Overall, I am genuinely optimistic that there will be tangible progress on addressing climate change and its societal impacts during the incoming administration’s tenure. It is an indisputably positive sign that we’re entering a renewed era of evidence-based decision-making in Washington, D.C. I am somewhat less confident that the hyperpartisan political reality of the U.S. today will allow for the kind of highly ambitious, large-scale changes that are necessary to truly get a handle on climate change over the course of the next couple of decades. But I remain hopeful.

Farhana Sultana, research director for Environmental Collaboration and Conflicts at the Program for the Advancement of Research on Conflict and Collaboration, Syracuse University

Climate breakdown is a matter of survival of peoples and the planet. It is an intersectoral, international and intersectional issue, thus necessitating actions that are comprehensive. To do this meaningfully, I think the most important action the Biden administration can do is to undertake all its policies and actions through a climate justice lens—which would enable seeing the interconnections across sectors and policies—and approach action with equity, accountability and justice in mind. This means addressing a range of issues, such as international cooperation, trade, financing, policies on agriculture, transportation, energy, housing, industry, etc. Starting with rejoining the Paris Agreement and following through on international commitments, it also requires addressing fossil fuel divestment, ethically transitioning to renewable energy sources that account for social and ecological impacts, shifting production and consumption patterns to reduce the U.S.’s greenhouse gas emissions, and addressing climate migration and displacement—to name just a few steps.

Ultimately, climate change connects us all but in extremely uneven and unequal ways. So the U.S. needs to step up to do the right thing in working with peoples, institutions and policies across the world to enact better climate justice.

The Biden administration was a win for planet Earth. There are immediate actions essential to restoring leadership within U.S. climate science and policy circles. The obvious low-hanging fruit is to rejoin the Paris climate agreement. Other critical actions will involve restoring science integrity in key climate-focused agencies. The EPA must feel empowered to “protect.” And federal scientists participating in the forthcoming National Climate Assessment should not feel constrained by agendas, ideology or meddling political appointees. It will also be critical that the administration reconcile that marginalized frontline communities suffer disproportionately from hurricanes, heatwaves, flooding and drought. Climate policy will need to be approached from the perspective of science, technology, energy, equity and justice. Strong messages can also be sent by appointing actual scientists to head science-related agencies. Science is our friend, not an enemy, and it is hopeful that this administration can convey that message. Kitchen-table issues of Americans likely have a climate component wrapped in them, whether they are obvious or not: the economy, health, water, infrastructure, food production, and more.