NASA’s Perseverance Rover On Course For Mars Landing This Week

by William Harwood: A week after two space probes from China and United Arab Emirates slipped into orbit around Mars… 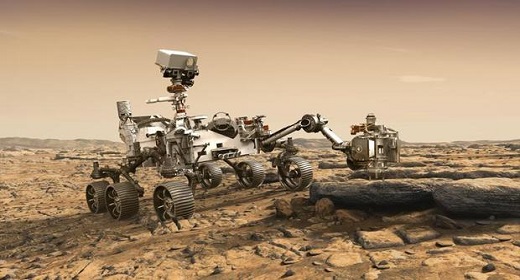 NASA’s $2.4 billion Perseverance rover, by far the most complex and ambitious of the three, will plunge into the red planet’s atmosphere Thursday for an automated white-knuckle landing.

If it survives the “seven minutes of terror” from atmospheric entry to its rocket-powered touchdown in Jezero Crater, the nuclear-powered Perseverance will proceed on its mission to search for evidence of past microbial life in deposits left over from a now-vanished lake.

“Perseverance is our robotic astrobiologist, and it will be the first rover NASA has sent to Mars with the explicit goal of searching for signs of ancient life,” said Robert Zurbuchen, NASA’s chief of space operations.

“It will build upon what we currently know from our previous rovers, orbiters and landers. And it will attempt to answer an age-old question that has eluded humanity for generations: whether life has ever existed elsewhere beyond our own planet, our Earth.”

Promising rock and soil samples, extracted and collected by a drill at the end of a seven-foot-long robot arm, will be placed in a complex internal carousel mechanism designed to load them in airtight lipstick-size containers.

The samples will be left in caches on the surface for retrieval by another NASA rover later this decade.  That rover will be shot into orbit atop a small rocket and then ferried back to Earth by a European spacecraft for laboratory analysis. It will be history’s first round trip to another planet and back.