by Ian Harvey: Arizona is one of those American states we tend to associate with dry, high winds and desert, the kind of landscape that shrivels skin and makes standing in the sun a risky proposition… 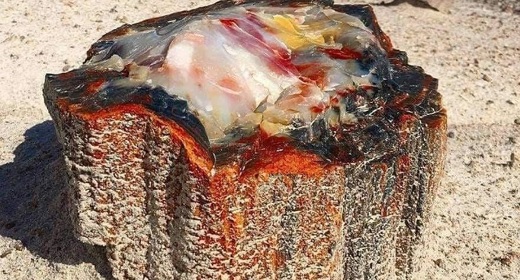 It’s been the backdrop of many a Hollywood western, because long ago folks went west to try their hand at silver mining and other entrepreneurial endeavours. Arizona is symbolic of the independent, high rolling lifestyle of past and present American individualism.

It doesn’t have a landscape we associate with forests and wooded stretches, but once, many millions of years ago, Arizona was just that, and today is home to the Petrified Forest National Park, in the northeastern part of the state. The story of Arizona’s petrified wood started about 225 million years ago during the Late Triassic period,

It is one of the world’s biggest, natural tourist draws and a rich source of material for researchers. The park covers almost 150 square miles of land, and is at an elevation of more than 5,00 feet. Its vegetation today largely consists of desert plant, like grasses and cacti.

Hard though it is to imagine, about 225 million years ago Arizona abutted a sea on its western edge and was affected by volcanoes spewing ash. As the water receded, many of the trees that made up its forest became mired in soggy earth, and remained there, stuck deep down, out of reach of air and microscopic critters that could damage it and cause it to rot.

Today, those trees, now petrified – dried up, essentially – are an amazing well of research material for scientists, archaeologists and other experts trying to understand what the landscape once looked like, and how it evolved.

And it isn’t just ancient, fossilized trees scientists study; also found in the park’s earth are dinosaurs, lizards, and all kinds of other creatures that once roamed there. Snails and even crocodiles once were common there too, many centuries ago. Eruptions from nearby volcanoes blanketed the area in volcanic ash, which introduced silica into the groundwater

Particularly intriguing about the fossilized, or petrified trees is what’s inside them. In one trunk there is opal, a stone we consider semi-precious that makes beautiful rings and other jewelry. This past spring, in March of 2020, experts found this trunk filled with lines of opal, a striking and unusual finding even in this oddly bleak but beautiful place. As groundwater flowed through, the wood absorbed silica through a process known as “capillary attraction” allowing fossilization to occur.

Wood petrifies when it sinks in soggy earth and stays there. Minerals can penetrate it through the sediment, but otherwise there is a barrier from the common causes of decay. Minerals access the wood because they are present in the groundwater in which it’s resting. Eruptions from nearby volcanoes blanketed the area in volcanic ash, which introduced silica into the groundwater

Eventually all the plant substance is replaced by the minerals, like pyrite (“Fools’ Gold,” as it is commonly known) and Silica. The latter material crystallized, and morphed, eventually, into quartz. Over time, and with the addition of other minerals, the wood’s interiors became a rainbow of colours that are strikingly beautiful.

This national park is, experts say, probably the largest and most-visited petrified forest in the world. It continues to offer experts and casual visitors alike a stunning array of visual delights, and it is a great place to see, up close and personal, what the landscape of Arizona once looked like, and what its vegetation was like.

As groundwater flowed through, the wood absorbed silica through a process known as “capillary attraction” allowing fossilization to occur.

It is also a stunning reminder of how nature works ceaselessly to constantly change the environment, the forests and waters we all assume have been around us forever.

Whether one visits the park as a tourist or an expert, to work or to tour its natural attractions, it offers a satisfying peek into how landscapes grow and change, how plants become fossils and the power of minerals to carve wood and turn it into something entirely new – but equally beautiful.