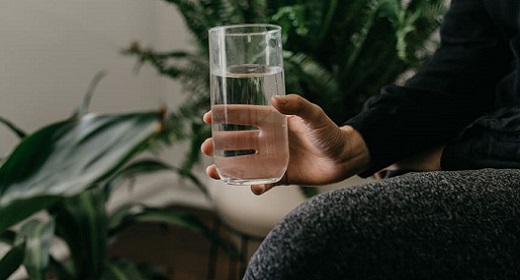 sweat has become this psychological marker of Oh, it’s time to drink water! and since people tend to sweat more during warmer months, you might unconsciously focus on hydration during the summer.

Here’s the thing, though: “Winter is just as dehydrating as summer,” says Dana Cohen, M.D., integrative medicine physician and co-author of Quench, on the mindbodygreen podcast. “I actually believe that people are more dehydrated in the winter.”

Why you might be more dehydrated in the winter.

We should note that, yes, it’s still important to hydrate during the summer. But let’s revisit that psychological marker we referenced above: Because you might associate sweat with needing to drink more water, in the winter (when you typically don’t sweat as much), the urge to drink may get put on the back-burner.

However, just because you might not be sweating as much, doesn’t mean you aren’t losing fluids. As Cohen explains, dehydration takes a different route during winter: “It’s not because you’re outside and sweating so much; it’s that indoor environment in the winter we don’t take into account.”

See, there’s less humidity (aka, water in the air) during the winter. And when you crank up the heat in your home, it creates an environment that literally sucks the moisture out of your body. It’s the same logic as why your skin loses more water in the winter (a process called transepidermal water loss). Ever wake up with a dry, scratchy throat or chapped lips? Yep, that’s your arid environment doing it’s thing.

How to rehydrate in the winter.

You can always, you know, drink more water. The exact number of glasses actually differs for everyone, says Cohen, so it’s important for you to find your personal benchmark—she does mention that half your weight in ounces of water is a good place to start, but again that can change if you follow a more dehydrating diet or exercise often.

Winter is also a great time to hydrate with food—think soups and warm drinks. “I eat more soups, more hot teas in the winter,” Cohen notes. Fill your soups with hydrating veggies (like greens, which have tons of fiber), and sip on a hot tea after your meals—chances are you’ll feel aptly hydrated. Plus, those comforting elixirs can warm you up, too. Win-win.

You can become dehydrated any month out of the year, but Cohen says it’s time we pay closer attention to hydration levels during winter. Just remember that even if you aren’t sweating buckets, doesn’t mean you aren’t losing water to the air, so make sure to get your liquids in.