by Claire Hannum: Relationships are complicated, so it makes sense that some so-called deal breakers should be ignored… 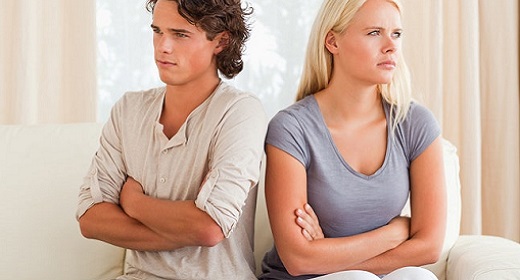 but some quirks are such bright red flags flapping violently in the wind that they simply must be acknowledged. Whether that means working together on a compromise or accepting that a person is just all wrong for you, here are some neon warning signs to be on the look out for.

1. They can’t stop telling you how perfect you are.

It sounds irresistible at first, but there’s nothing more infuriating than being put on a pedestal by a partner. This person doesn’t really see you as you—you’re a projection of some perfect idea they have in their head, and anytime you shatter those expectations by being a normal, flawed, breathing human being, they’re impossible to console. Oh yeah, and someone being that obsessed with you is CREEPY.

2. Their sex drive is much higher or lower than yours.

There’s no wrong amount of sex to have (or not have) in life, but it is important that you and your partner have a similar libido or, at the very least, a plan to handle any differences. What if one partner’s vision of an ideal sex life is getting it on nearly every night, while the other is content with having sex just a few times a month? When one partner is constantly initiating sex and the other isn’t in the mood very often, you’re in for a world of crushed egos, hurt feelings, emotional pressure, and resentment from both sides.

3. They push your physical boundaries in “innocent” ways.

Does your new bae refuse to stop tickling you when you tell them to knock it off? Do they continue to touch you in seemingly innocent ways (like hugs, shoulder rubs or even repeatedly poking you in the arm like a sibling) when you ask for personal space? This might be a sign they don’t respect your right to your own body and could try to push those boundaries to much more dangerous limits in the future.

4. They rush a new relationship forward too quickly.

They’re either on the rebound, practicing a particularly toxic version of serial monogamy, or a malignant narcissist. Either way, NOPE NOPE NOPE.

5. They try to drive a wedge between you and your family and friends.

Anyone who wants you all to themselves is likely someone worth running far, far away from before they sink their claws in any deeper.

6. They roll their eyes at you a lot.

Research has shown that among married couples, rolling eyes at each can be a common predictor of divorce, and why wouldn’t it be? Mutual respect is a major foundation of a happy relationship, and nobody you frequently roll your eyes at has much of your respect.

7. They describe all their exes as “crazy.”

Some relationships end so badly that we’re still sour at an ex or two years down the line—but if your new partner spews vitriol at any and all of their “crazy” former lovers every chance they get, it’s a good clue that they are the problem.

8. They call you names in arguments.

Fighting happens, but be wary of anyone who seems to flip a switch and transform into an unrecognizable monster when you disagree, calling you names that would make their mother want to wash their mouth out with soap. It can be a sign of disrespect and just plain shitty conflict resolution skills, which does not a happy couple make.

9. They have no work ethic.

If a person is behind on life milestones or doesn’t quite have their shit together on the surface, what matters more than their situation is how they feel about it. Are they just unmotivated as hell (in which case, NEXT), or are they only behind because of a big sacrifice or setback in their life? We all move on different personal timelines, after all. Better yet, is this person working hard every day to build the kind of life they actually want for themselves if they don’t like their current reality? Attitude makes all the difference.

10. They’re cruel to their parents.

Everyone struggles with their folks sometimes (show me someone who blindly worships Mom and Dad as a grown adult and I’ll show you a liar), but keep your eye open for partners who have a fundamental lack of respect for their parents. (Unless their parents are abusive, in which case, they’re beyond justified in refusing to make nice with them if they so choose.) If they can bear to be super harsh and ungrateful to the people who literally gave them life, what does that say about how they’ll treat others who get close to them?

11. Their attitude changes on a dime.

Do they spend an entire day being cruel to you and nearly pushing you to your emotional limit, then abruptly turn on the charm with zero explanation or apology, only to switch back into monster mode as soon as you start to trust their good mood? This is a cycle to bolt away from, stat.

12. They’re on a different sleep schedule than you are.

It seems like this would be NBD, but if you’re living on a daytime schedule and your bae is all about the nightlife, you’re going to run into loads of problems (in terms of your social life, your careers, and even when the hell you get to spend time together) if they perk up at 10 P.M. just as you’re getting ready to turn in for the night.

14. They cheated on their last partner with you.

It might be wise to learn a little more about this person’s romantic history, because there’s a good chance that every relationship they’ve ever had has overlapped with the next one—in which case it’s only a matter of time before they cheat on you too.

15. They demand your phone, email and social media passwords.

For starters, why would they want to date someone they don’t trust? And what does that say about whatever untrusty worthy habits or temptations they might be projecting onto you? Checking your Facebook inbox in peace without someone mouth-breathing over your shoulder is practically a basic right! You are 100 percent entitled to autonomy and privacy.

16. They guilt trip you every chance they get.

Some people have an uncanny talent for making their partner feel personally responsible and guilty for all their misfortunes. These are not people you want to date.

17. They have different financial values than you and refuse to do anything about it.

We all have deeply held habits and ideas about money that most of us learned from our parents. Lots of couples have totally different concepts of money and find ways to compromise, but it’s SO important to be willing to talk about it before clashing money choices drive you apart.

18. They make you feel stupid.

The Worst People On The Planet are those who gleefully gaslight their partners (read: twisting the truth to make you doubt your sanity, memory or reality.) Other gross tactics include regularly mocking your ideas or refusing to take your opinion seriously because they’re so convinced they can change your mind anyway that they assume they can just skip the whole “valuing your perspective” stuff.

Anybody who doesn’t respect how vulnerable sex makes people feel or who shames their partner over run-of-the-mill awkward naked moments (ahem, like embarrassing sounds and physical mishaps) is nobody worth doing the deed with.

20. They refuse to make your relationship public.

Some people simply don’t like splashing their personal life onto social media or even talking much about their feelings with friends, but that’s different from flat-out hiding your partnership, which is about as glaringly red as a flag can get!

We are all insecure on some level, and it’s nobody’s fault for feeling that way, but no reassurance from a partner will ever be enough, because those issues live inside the person feeling them. If insecurity dictates a person’s life, it can just as easily dictate their relationship.

22. They have a different idea than you of what it means to be faithful.

What if your partner thinks it’s totally chill to hook up with someone else as long as they aren’t, like, in love with them? Or what if they think it’s fine to carry on intense emotional texts and conversations with someone else as long as they never physically cheat? Heck, maybe one of you wants an open relationship and the other will never be okay with that idea. These are differences to catch before they cause lots of pain!

23. They hold you to a double standard.

They beg you to never go out on the town without them, yet they want you to wait at home alone on the couch while they party until 2 A.M. with their buddies? See ya later BB, we’re dunzo.