An Extinct Cave Bear’s DNA Was Still Readable After 360,000 Years

by George Dvorsky: A tiny ear bone belonging to a cave bear that died some 360,000 years ago has yielded the oldest genome not sourced from permafrost… 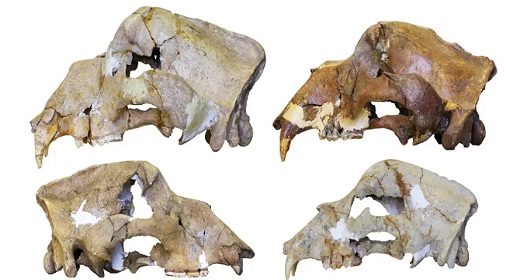 The newly sequenced genome is offering new insights into the evolution of cave bears and how climate change can precipitate the emergence of entirely new species.

“With DNA, we can decipher the genetic code of extinct animals long after they’ve gone, but over thousands of years, the DNA present in ancient samples slowly disappears, creating a time limit of how far back in time you can normally go,” Axel Barlow, the first author of the new study and paleogeneticist from Nottingham Trent University, said in a statement.

The new study, published in Current Biology, shows that DNA can last longer than scientists presumed, “opening up new opportunities for genetic investigation over previously unimaginable timescales,” added Barlow. The bone analyzed in the new study—a petrous bone from the inner ear of an extinct cave bear—was approximately seven times older than any the team had studied before, “showing that genome data can be recovered from temperate zone samples spanning more than 300 millennia,” he said.

Indeed, older DNA samples exist, but they were all sourced from fossils found in permafrost, like the astounding million-year-old mammoth teeth that recently made headlines.

Cave bears (Ursus spelaeus) haven’t captured the public’s imagination like woolly mammoths, but they’re important nonetheless. During the Pleistocene, their range spanned the entire Eurasian continent, but caves bears eventually went extinct at some point between 27,800 and 25,000 years ago. They were larger than brown bears, weighing somewhere around 1,540 pounds (700 kg), and they were likely omnivorous.

Cave bears and modern bears, such as brown bears and polar bears, diverged from a common ancestor, and interbreeding among the various species was common. This divergence was believed to have occurred over 1 million years ago, but scientists weren’t exactly certain.

The petrous bone analyzed in this study was found in the Kudaro Caves of the Caucasus mountains, now Georgia, and it dates back some 360,000 years to the Middle Pleistocene. This geographical location is significant in that it represents a warmer, temperate climate. But because DNA doesn’t preserve well in warmer areas, less is known about the genetics of animals that once made these places their home.

As the new research shows, however, bones found in temperate regions can store DNA for longer periods than we assumed.

“Even though the bone is not from permafrost, it is from a cave in the mountains where conditions—such as temperature and humidity—are quite constant and the average temperature is low,” Michael Hofreiter, the senior author of the study and a researcher at the University of Potsdam, explained in an email. “And then it was a petrous bone, which is the hardest bone in the mammalian skeleton, and, therefore, DNA survives best in this bone.”

The scientists compiled billions of short DNA fragments, which had to be parsed by a computer to weed out contaminating sources that had accumulated over the previous 360,000 years. A reference genome taken from a modern polar bear assisted with this clean-up process. The newly sequenced genome was basically “as reliable as any ancient genome,” said Hofreiter, because “one always has to separate bacterial and fungal sequences from those originating from the [target] animal,” and in most cases, “the latter DNA constitutes the smaller part.”

A key question going into the DNA analysis was how closely this bear might be related to more recent cave bears (those that lived less than approximately 50,000 years ago) from the same region and also from farther away, said Hofreiter.

Equipped with their cave bear genome, the scientists performed a comparative analysis with other bears that lived between 70,000 and 35,000 years ago. The genetic analysis was not limited to the study of mitochondrial DNA (i.e. DNA passed down exclusively through the maternal line), as it also included nuclear DNA (i.e. DNA inherited from both parents), which painted a clearer picture of the cave bear’s evolutionary relationships.

The new paper confirms that cave bears and modern bears diverged from a common ancestor and that this split happened approximately 1.5 million years ago.

“This very old genome allowed us to estimate how long ago cave bears separated from brown bears and polar bears, and also when brown bears and polar bears, as well as the major evolutionary lineages of cave bears, separated,” said Hofreiter. “Interestingly, these separations happen pretty much around the time when the ice age cycles became more extreme, so it looks like climate has influenced the evolution of these bear species quite a bit.”

The new research also showed when, and between which lineages of bears, gene flow occurred, meaning “when we had hybridizations of separate evolutionary lineages,” explained Hofreiter. Key phases in the evolutionary history of the cave bear were tied to significant environmental shifts that happened approximately 1 million years ago.

And of course, the new paper also demonstrates the surprising durability of DNA. Indeed, the finding suggests it’s “worthwhile to look for ancient DNA outside the permafrost in samples up to an age of maybe 500,000 years [ago] when conditions look favorable, like in our case, which is opening up lots of opportunities,” said Hofreiter.