How The Finnish Survive Without Small Talk

by Laura Studarus: Their desire for avoidance is a predisposition so common that it’s become hard-baked into Finnish culture… 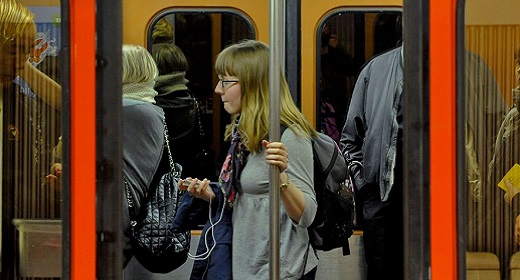 I met my now best friend Hanna a few years ago during my first visit to Helsinki, on a coffee date set up out of desperation. Without any acquaintances in the city, I just wanted someone to sit next to in public, and given our tenuous work connection, she fitted the bill. Our drink quickly turned into dinner, wrapping up four hours later after doing deep dives on politics, religion, sex and life, the kind of topics that usually take friends years to address. A year later, I flew back to be a bridesmaid at her wedding, still shocked at how fast we forged a connection.

“Laura,” she told me matter-of-factly when I asked why we had bonded so quickly.

What she neglected to tell me, however, is that Finns think if there’s no important topic to discuss, there’s no conversation at all. In fact, one of their national sayings is ‘Silence is gold, talking is silver’.

Small talk outside social situations between close friends is virtually non-existent. Interactions with baristas? Limited to the name of the coffee you want to order. Sitting, walking or standing in a way that requires acknowledging a stranger’s presence? Never. (A meme featuring people standing outside a bus shelter rather than under it is an often-posted joke in Finland to illustrate this point.) If you’re a foreigner, congratulations – you’re probably the loudest person on their often (voluntarily) silent public transport.

With two million saunas in the country, which are enjoyed fully nude (generally gender-segregated, although that rule tends to be thrown out in the company of friends), the Finnish seem to have no problem with getting up close and personal. But when clothes are on, the bets are off. 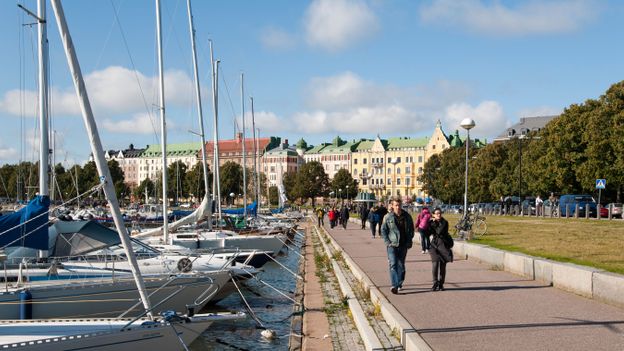 One of Finland’s national sayings is ‘Silence is gold, talking is silver’ (Credit: Eric Nathan/Alamy)

Finnish people often forgo the conversational niceties that are hard-baked into other cultures, and typically don’t see the need to meet foreign colleagues, tourists and friends in the middle. As Tiina Latvala, a former English instructor in Sodankylä, Lapland, explained, part of her job was to introduce her young students to the concept of small talk.

“We had a practice where you had to pretend to meet someone for the first time,” Latvala said. “You had to pretend you were meeting at the cafe or on a bus and [that] you didn’t know each other and do a bit of chit chat. We had written on the whiteboard all the safe topics so they didn’t have to struggle with coming up with something to talk about. We brainstormed. They usually found it really difficult.”

Alina Jefremoff, an 18-year-old Finnish student in Helsinki, recalls similarly formatted exercises with an air of incredulity. Thanks to television and films (which are mostly broadcast in English) she was already acquainted with non-Finnish communication styles. Even still, she had to endure a series of connect-the-dot-style homework assignments.

“[They’re] about basic conversation,” she explained. “The answers are already there. We are taught to answer ‘I’m great, how about you?’; ‘How is your mum?’. It was very clear how to be in a conversation, as if we didn’t already know. It was very weird… as if there were right answers to the questions.” 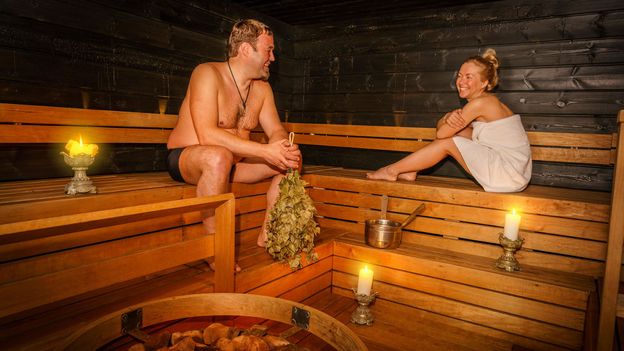 Finnish sauna culture shows the Finns have no problem getting personal, but when clothes are on, the bets are off (Credit: ARCTIC IMAGES/Alamy)

When asked for an example of how she wishes Finnish society were more open, Jefremoff gave the example of doing something ridiculous, like dropping her books in the metro, and then laughing at herself. She says she wishes that strangers would join her in acknowledging the silliness of the situation by laughing or commenting. Initiating social contact with people you don’t know? Not something they’ve been taught.

There are more hypotheses than answers for why Finnish culture has a veil of silence permanently stitched in place. Latvala believes their trademark directness has something to do with the complexity of the Finnish language and the fairly large distance between cities (Latvala’s reasoning: If you’ve travelled any distance to see someone, why waste time?).

However, Prof Laura Kolbe, who teaches European history at the University of Helsinki, sees the topic through a comparative lens. The Finns, she says, don’t see their quietness or lack of small talk as a negative. Instead, every culture judges another on their social norms, hence the widespread stereotype of the silent Finn among more emotive nationalities.

“The idea of silence has been especially prevalent when Finns were seen from the eyes of close neighbours,” she explained. “For example, when Swedish- and German-speaking people came to Finland in the past, they saw Finns as silent citizens, wondering why the people didn’t speak any Swedish or German and rather remained silent among their guests.” 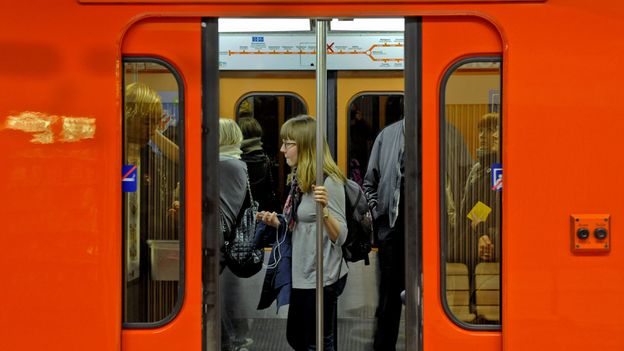 When Finns do opt out of casual conversation, it has something to do with respect (Credit: Rolf Adlercreutz/Alamy)

It isn’t for lack of skill, for Finland has two national languages – Finnish and Swedish – and Finns begin English lessons when they’re six or seven. But rather it’s because when faced with expressing themselves in second (or third) language, many often choose to not say anything rather than risk not being fully understood. However, when among their own, silence functions as an extension of comfortable conversation.

It’s an idea that’s backed up by Dr Anna Vatanen, a researcher at the University of Oulu, whose forthcoming study ‘Lapses in interaction and the stereotype of the Silent Finn’ demonstrates that at least among their own, Finns do communicate through comfortable silence – particularly among familiars. When it comes to outsiders judging the stereotypically straightforward Finn, she warns that some nuances do get lost in translation.

“It’s not about the structure or features of the language, but rather the ways in which people use the language to do things,” she explained via email. “For instance, the ‘how are you?’ question that is most often placed in the very beginning of an encounter. In English-speaking countries, it is mostly used just as a greeting and no serious answer is expected to it. On the contrary, the Finnish counterpart (Mitä kuuluu?) can expect a ‘real’ answer after it: quite often the person responding to the question starts to tell how his or her life really is at the moment, what’s new, how they have been doing.” 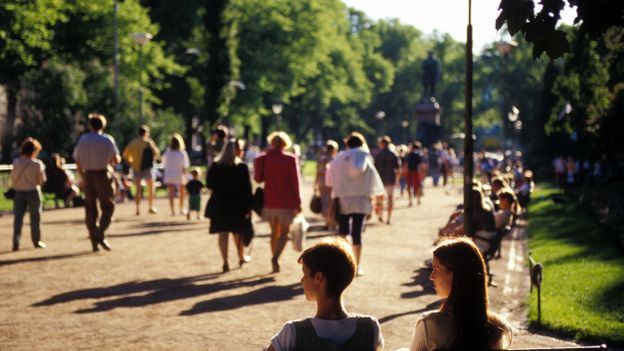 But when Finns do opt out of casual conversation, says Karoliina Korhonen, author of Finnish Nightmares, a book and online comic series where an ‘average’ Finn deals with life’s most benign terrors, it also has something to do with respect. Why risk making someone else feel uncomfortable?

“I like to think Finnish people value personal space,” she notes. “If you don’t know another person, you don’t want to bother them. They might be having their own time or they don’t want a stranger to come bother them. If you see they’re open and you both are open, you can have something. But most of the time people are polite and keep their distance.”

But their desire for avoidance is a predisposition so common that it’s become hard-baked into Finnish culture. Formula One driver Kimi Räikkönen has built his iconic image around his lack of talking. Comics use the Finn’s lack of small talk as part of their routine. It’s even gone international: thanks to the unexpected spike in popularity of Korhonen’s work in China, teens there who don’t enjoy social interactions are describing themselves as ‘spiritually Finnish’. 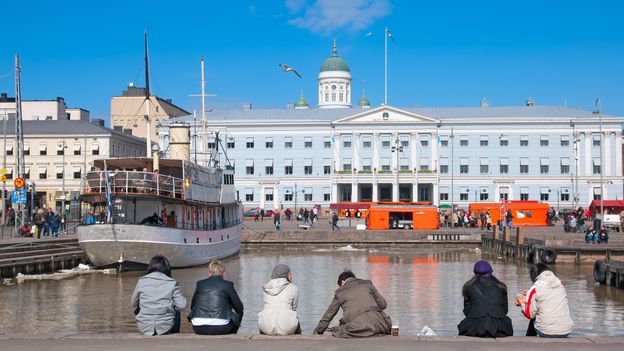 Finns think if there’s no important topic to discuss, there’s no conversation at all (Credit: Nataliia Rumiantseva/Alamy)

In some cases, though, Finnish society seems to be trending toward a marginally more open existence. However, it’s happening slowly. For Jussi Salonen, COO of Finnish chocolate company Goodio, living in Los Angeles for two years made him wish he could import a bit more of the US’ open spirit to his home country.

“When I was [back] in Finland, I was almost offended when I went to get a cup of coffee from a coffee shop and they didn’t say anything,” he recalled. “It was just ‘what do you want?’. How can you say that? Are you not going to ask anything before that? Oh, yeah. This is my home country. This is just the way things are. It was funny to notice how things got twisted a little bit when I was living over there… I think a little bit of communication or small talk doesn’t hurt.”

It’s a hopeful idea that Finns can meet the rest of the world in the middle while respecting each other’s privacy. But for now, it leaves Finland with one of the most interesting social dichotomies. Sure, you might not speak to people on the street. But if you’re lucky, sometimes a stranger will instantly become a friend and tell you everything.