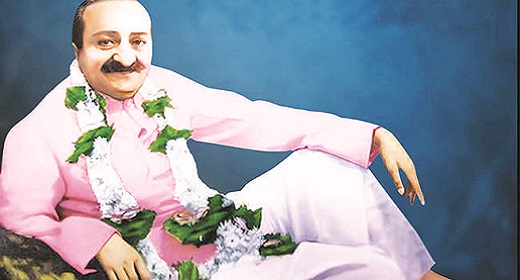 Meher Baba, also called the Awakener, original name Merwan Sheriar Irani, (born February 25, 1894, Poona [now Pune], India—died January 31, 1969, Ahmednagar), spiritual master in western India with a sizable following both in that country and abroad. Beginning on July 10, 1925, he observed silence for the last 44 years of his life, communicating with his disciples at first through an alphabet board but increasingly with gestures. He observed that he had come “not to teach but to awaken,” adding that “things that are real are given and received in silence.”

He was born into a Zoroastrian family of Persian descent. He was educated in Poona (Pune) and attended Deccan College there, where at the age of 19 he met an aged Muslim woman, Hazrat Babajan, the first of five “perfect masters” (spiritually enlightened, or “God-realized,” persons) who over the next seven years helped him find his own spiritual identity. That identity, Meher Baba said, was as the avatar of his age, interpreting that term to mean the periodic incarnation of God in human form. He placed himself among such universal religious figures as Zoroaster, Rama, Krishna, the Buddha, Jesus Christ, and the Prophet Muhammad. “I am the same Ancient One come again into your midst,” he told his disciples, declaring that all major religions are revelations of “the One Reality which is God.”

Meher Baba’s cosmology may be summarized as follows: the goal of all life is to realize the absolute oneness of God, from whom the universe emanated as a result of the whim of unconscious divinity to know itself as conscious divinity. In pursuit of consciousness, evolution of forms occurs in seven stages: stone or metal, vegetable, worm, fish, bird, animal, and human. Every individualized soul must experience all those forms in order to gain full consciousness. Once consciousness is attained, the burden of impressions accumulated in those forms prevents the soul from realizing its identity with God. To gain that realization, the individual must traverse an inward spiritual path, eliminating all false impressions of individuality and eventuating in the knowledge of the “real self” as God.

Meher Baba saw his work as awakening the world through love to a new consciousness of the oneness of all life. To that end he lived a life of love and service, which included extensive work with the poor, the physically and mentally ill, and many others, including such tasks as feeding the poor, cleaning the latrines of Dalits (untouchables), and bathing lepers. He saw a responsibility to give spiritual help to “advanced souls,” and he travelled throughout the Indian subcontinent to find such persons.

These outward activities Meher Baba saw as indications of the inner transformation of consciousness that he came to give the world. He established and later dismantled many institutions of service, which he compared to scaffolding temporarily erected to construct a building that really was within the human heart. He said that a “new humanity” would emerge from his life’s work and that he would bring about an unprecedented release of divine love in the world.

Between 1931 and 1958 he made many visits to the United States and Europe, on one such trip in 1952 establishing the Meher Spiritual Center in Myrtle Beach, South Carolina. A similar centre, Avatar’s Abode, was created at Woomby, Queensland, Australia, in 1958.

From the mid-1960s Meher Baba was in seclusion, and during that period several users of recreational drugs in the United States sought him out in a quest for spiritual truth. Through them his admonitions against the nonmedical use of psychedelic and other drugs came to the attention of the news media in the United States and other Western countries. He warned young people explicitly that “drugs are harmful mentally, physically, and spiritually,” trying to draw them away from drugs and toward a spiritual life.

Meher Baba never sought to form a sect or proclaim a dogma. He attracted and welcomed followers of many faiths and every social class with a message emphasizing love and compassion, the elimination of the selfish ego, and the potential of realizing God within themselves. Although his equation of the several manifestations of God was syncretic, he won many followers from sects and denominations that repudiated syncretism, and he encouraged those followers to be strong in their original faiths. After his death his followers heeded his wish that they not form an organization, but they continued to gather informally and often to discuss and read his works and express through music, poetry, dance, or drama their reflections on his life. His tomb at Meherabad, near Ahmednagar, has become a place of pilgrimage for his followers throughout the world. His books include Discourses (1938–43; 5 vol., the earliest dictated on an alphabet board and the others by gesture), God Speaks: The Theme of Creation and Its Purposes (1955), and The Everything and the Nothing (1963).