by Nicoletta Lanese: When NASA’s Perseverance rover touched down on Mars in February, it carried a bit of the Wright brothers’ first airplane with it… 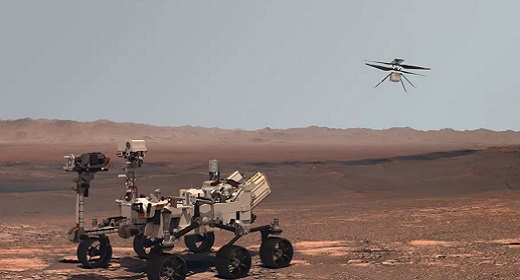 A swatch of fabric from the airplane, known as the Flyer, is secured beneath the solar panels of an experimental helicopter, which in turn is strapped to the underside of the rover, according to a statement from NASA. The helicopter, called Ingenuity, is attached to the rover for now, but soon, if all goes well,  scientists will pilot the aircraft remotely over the surface of the Red Planet.

This flight will be attempted “no earlier than April 8,” NASA said. The rover must first transport Ingenuity to a designated airfield and deploy the chopper; once dropped off, the helicopter must gather enough solar energy to power its internal heaters and prevent its instruments from freezing.

The brothers used an unbleached muslin material to cover the aircraft’s wings. The Ingenuity chopper carries a bit of that muslin, wrapped in insulating tape and secured to a cable within the helicopter. The Carillon Historical Park in Dayton, Ohio collected the small piece of fabric, about the size of a postage stamp, from the plane’s left wing and donated it at NASA’s request, The Associated Press (AP) reported.

“Wilbur and Orville Wright would be pleased to know that a little piece of their 1903 Wright Flyer I, the machine that launched the Space Age by barely one quarter of a mile, is going to soar into history again on Mars,” Amanda Wright Lane and Stephen Wright, the Wright brothers’ great-grandniece and great-grandnephew, said in a statement, according to the AP.

This isn’t the first scrap of the Wright Flyer I to blast off into space. Apollo 11 carried both a bit of muslin and a splinter of wood from the Flyer during the 1969 mission to the Moon, according to NASA.