When The Dalai Lama Dies, His Reincarnation Will Be A Religious Crisis.

by Ben Westcott: A decade ago, the Dalai Lama set himself a significant deadline… 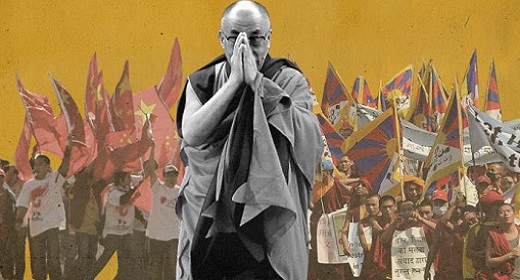 The best-known living Buddhist figure in the world said that when he turned 90 years old, he would decide whether he should be reincarnated — potentially ending a role that has been key to Tibetan Buddhism for more than 600 years, but in recent decades has become a political lightning rod in China.
While the 14th Dalai Lama, Tenzin Gyatso, is reportedly still in good health, he is now 85 and questions over his succession are growing, along with fears that his death could spark a religious crisis in Asia.
After an unsuccessful revolt against the Chinese occupation of Tibet in 1959, the Dalai Lama fled to India where he established a government-in-exile in Dharamsala, leading thousands of Tibetans who have followed him there. While the Dalai Lama had originally hoped his exile would only be temporary, Beijing’s control of Tibet has only tightened, making a return unlikely anytime soon.
Today, Beijing views him as a separatist with the aim of breaking Tibet away from China, and is therefore keen for the next reincarnation of his role to fall in line with its own political aims.
Since 1974, the Dalai Lama has said he does not seek independence from China for Tibet, but a “meaningful autonomy” that would allow Tibet to preserve its culture and heritage.
Over the years, the Dalai Lama has floated a number of options for his reincarnation, including picking a new successor himself in India, rather than in Tibet — and has even toyed with the idea of a woman taking on the role.
Experts, however, have said that, regardless of what he chooses, the Chinese government will almost certainly move to pick a new Dalai Lama in Tibet — one who is expected to support the ruling Chinese Communist Party’s (CCP) control of the region.
That could lead to two separate Dalai Lamas being chosen — one in China and one in India.
Tenzin Tseten, a research fellow at the Dharamsala-based Tibet Policy Institute, said the Dalai Lama was of great significance to the Tibetan people and a symbol of their “nationalism and identity.” “The Tibetan people will never accept a CCP-appointed Dalai Lama,” Tenzin said. 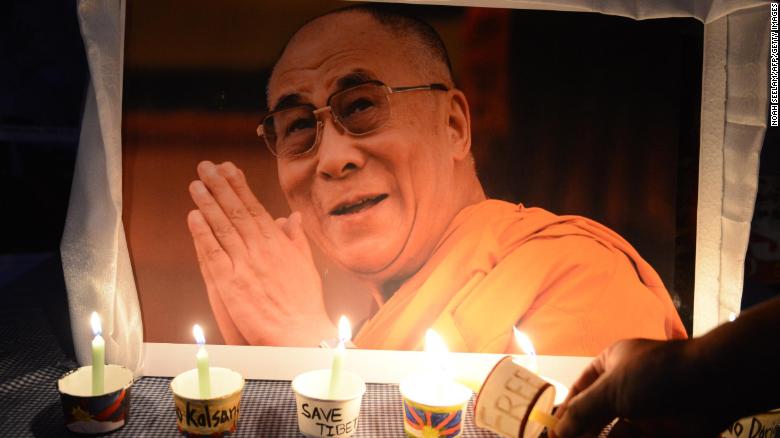 A Tibetan activist lights a candle in front of a poster of spirtual leader The Dalai Lama as members of the Regional Tibetan Youth Congress (RTYC) take part in a candlelight vigil during a protest rally in Hyderabad on March 10, 2016.

History of the Dalai Lama

The Dalai Lama has been reincarnated 13 times since 1391, when the first of his incarnates was born, and normally a centuries-old method is used to find the new leader.
The search begins when the previous Dalai Lama passes away. Sometimes it is based on signs that the former incarnation gave before he died, at other times top lamas — a monk or priest of varying seniority who teaches Buddhism — will go to a sacred lake in Tibet, Lhamo Lhatso, and meditate until they have a vision of where to search for his successor.
Then they send out search parties across Tibet, looking for children who are “special” and born within a year of the Dalai Lama’s death, according to Ruth Gamble, an expert in Tibetan religion at La Trobe University in Melbourne, Australia.
“There’s a heavy responsibility on these people to get it right,” she said.
Once they find a number of candidates, the children are tested to determine whether they are the reincarnation of the Dalai Lama. Some of the methods include showing the children items which belong to the previous incarnation.
According to the 14th Dalai Lama’s official biography, he was discovered when he was two years old. The son of a farmer, the Dalai Lama was born in a small hamlet in northeastern Tibet, where just 20 families struggled to make a living from the land.
As a child, he recognized a senior lama who had disguised himself to observe the local children, and successfully identified a number of items belonging to the 13th Dalai Lama.
In his autobiography, “My Land and My People,” the Dalai Lama wrote that he was handed sets of identical or similar items — including rosaries, walking sticks and drums — one of which had belonged to the previous incarnation and one which was ordinary. In every case, he chose the correct one.
But the Dalai Lama’s reincarnation hasn’t always been found in Tibet. The fourth Dalai Lama was found in Mongolia, while the sixth Dalai Lama was discovered in what is currently Arunachal Pradesh, India.
“The most important thing is the centuries old Tibetan reincarnation system is built on people’s faith in rebirth,” said Tenzin, from the Tibet Policy Institute.

At the moment, there are no official instructions laying out how the Dalai Lama’s reincarnation will take place, if he dies before returning to Tibet.
But in that significant 2011 statement, the 14th Dalai Lama said that “the person who reincarnates has sole legitimate authority over where and how he or she takes rebirth and how that reincarnation is to be recognized.”
The Dalai Lama added that if he chose to reincarnate, the responsibility for finding the 15th Dalai Lama will rest on the Gaden Phodrang Trust, a India-based group he founded after going into exile to preserve and promote Tibetan culture and support the Tibetan people.
The Dalai Lama said that his reincarnation should be carried out “in accordance with past tradition.” “I shall leave clear written instructions about this,” he said in 2011. CNN reached out to the Gaden Phodrang Trust to see if new instructions had been issued but did not receive a reply.
One thing that has become increasingly clear is that the reincarnation is unlikely to take place in Tibet, an area the Gaden Phodrang Trust cannot even access — especially after the contested reincarnation of the Panchen Lama in the 1990s.
Following the 1989 death of the 10th Panchen Lama, the second most important figure in Tibetan Buddhism, the Dalai Lama named Tibetan child Gedhun Choekyi Nyima as his colleague’s reincarnation.
Gamble, from La Trobe University, said that during the selection process, the Tibetan government-in-exile was secretly in contact with people in Tibet which allowed it to find the reincarnation in a traditional manner.
But three days after he was chosen, according to the US government, Gedhun and his family were disappeared by the CCP, which then appointed an alternative Panchen Lama. Gedhun hasn’t been seen in public since.
What the Tibetans-in-exile learned from that experience, said Gamble, is “if you recognize someone inside the PRC and they’re really high level, they won’t be able to get them out.”

What the Chinese government will do

The Chinese government has very publicly telegraphed its intentions for the Dalai Lama’s reincarnation — it will take place in Tibet and it will be in accordance with Beijing’s wishes.
In 2007, the Chinese government’s State Religious Affairs Bureau published a document which laid out “management measures” for the reincarnation of living Tibetan Buddhas.
The document said that the reincarnations of Tibetan religious figures must be approved by Chinese government authorities, and those with “particularly great impact” must be approved by the State Council, China’s top civil administration body currently led by Premier Li Keqiang.
“(Beijing) asserts control over the searches, testing, recognition, education, and training of religious figures,” said Tseten, from the Tibet Policy Institute.
There are few specifics about the process of reincarnation in the Chinese government’s document, except to recognize the so-called “golden urn” process, which was introduced into Tibet by the Qing Dynasty in the 1790s and sees the names of potential child candidates put into a small golden urn and selected at random.
According to Chinese state-run media, it was put in place to help “eliminate corrupt practices” in the choice of reincarnations.
However, in his 2011 statement,the Dalai Lama said the golden urn was only used to “humor” the Qing emperors, and the reincarnations were already chosen before the names were drawn. The urn was not used in the 14th Dalai Lama’s reincarnation.
“Bear in mind that, apart from the reincarnation recognized through such legitimate methods, no recognition or acceptance should be given to a candidate chosen for political ends by anyone, including those in the People’s Republic of China,” said the Dalai Lama in his statement in 2011.

In an update of its Tibetan Policy and Support Act in December 2020, the US threatened to sanction any Chinese government officials who chose a reincarnation of the Dalai Lama over the wishes of the Tibetan people.
But experts said that the CCP has been using a far more insidious method to prepare for the selection of the next Dalai Lama. In recent years, Beijing has been selecting and grooming a group of senior lamas who are friendly to Beijing, according to experts.
When the time comes to select the Dalai Lama’s successor, they might make it appear that the Dalai Lama was chosen by Tibetan Buddhist religious leaders, rather than CCP officials.
La Trobe University’s Gamble said the reincarnation process has been based on the steady building of religious authority over generations, as one lama recognized another’s reincarnation, and then that lama in turn recognized his patron when they returned as a child.
“Their authority lends authority to the next Dalai Lama and then that Dalai Lama gives them back authority by finding them when they’re kids and that’s what the Chinese government are trying to get themselves involved in, to destabilize that authoritative circle,” she said.
Tenzin, from the Tibet Policy Institute, said that Beijing had been slowly raising the profile of their chosen Panchen Lama, who has recently appeared at senior CCP meetings and went on an international visit to Thailand in 2019, to try and build his authority when he selects the 15th Dalai Lama. The Panchan Lama is part of the group of senior lamas who will do the selecting — another example of this group being groomed and selected by Beijing.
What geopolitical impact the Dalai Lama’s death might have on the Tibetans-in-exile is unclear. India has increasingly viewed the community in Dharamsala as a political vulnerability, and some worry that without the Dalai Lama there may be pressure put on the group to leave.
But neither Gamble nor Tenzin, from the Tibet Policy Institute, believed that having two Dalai Lamas would have a huge impact on the legacy of Tenzin Gyatso. “People still keep the photos of the 10th Panchen Lama around as a way of getting around (his reincarnation). They send his teachings and read his books,” Gamble said. “I don’t think the Dalai Lama’s death will end the devotion to him in the way that the CCP thinks it will.”
Both experts said they believed that while protests against the CCP’s chosen Dalai Lama would be difficult to carry out in Tibet with Beijing keeping a tight grip over the Himalayan region, he would have very little influence over Tibetans compared to his predecessor.
Tenzin said the CCP’s treatment of the new Panchen Lama, the second most important figure in Tibetan Buddhism, gives an indication of the pressure the party could apply to any future Dalai Lama — whether Beijing selects him or not.
According to international advocacy group Human Rights Watch, the current Panchen Lama effectively lives under house arrest in Beijing.
“He is not even able to live in his own monastery,” Tenzin said.