by Victor M. Parachin: Discover ways to feel more free through Buddhist practices. “We all want freedom but we are not always so sure about what it is or how to attain it…” 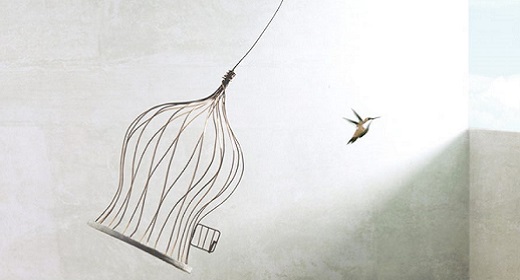 “We all want freedom but we are not always so sure about what it is or how to attain it. If freedom were merely a matter of not being in a prison cell then the vast majority of us should be free, but we often find ourselves imprisoned by internal anxieties, worries, habits, compulsions, fears, depression, addictions, and false assumptions.”

That wisdom is offered by Dr. Craig Hassed, Professor in the Faculty of Medicine at Monash University, Melbourne. Hassed has acutely described the dilemma of many people in our culture: While there is an abundance of access to material things, they continue to feel confined and emotionally imprisoned. Here are six simple but effective Buddhist ways to have more freedom.

Eventually all bodies become damaged and diseased, but exercise can keep us feeling as free as possible as long as possible. “The care of the body is not just for beauty but also to prevent sickness,” says modern Buddhist Master Hsing Yun. If you become unhealthy and sick, some forms of freedom disappear. So, discipline yourself to move your body daily for a prolonged period of time at whatever form of activity appeals to you.

“Whether we use our life to benefit or to harm self and others depends upon the state of our mind,” says Buddhist teacher Glenn H. Mullin. An example of a mind benefiting or harming is related by Kanjitsu Iijima in his book Buddhist Yoga. In the days before World War II, a Japanese widow in America had a small cleaning business. One day during her absence, the shop caught fire. When she returned, only smoke and ashes remained. In shock, she was seen walking in circles around the ruins. Three days later, she was discovered dead. The distraught woman ended her life by suicide by hanging herself from the blackened beams. Those who knew her said she had a huge distrust of banks and likely had cash hidden inside the laundry, which, of course, burned up with the building.

Though the death certificate cited “suicide” as her cause of death, a closer examination could conclude her cause of death was weak mind management. There’s no question that she went through a terrible trauma that would knock many of us down. But her thoughts focused entirely on loss and destruction, leaving no opening for thoughts of rebuilding and restoration. Many others experienced complete financial devastation but managed to survive and come back from their losses. According to the Buddha it all comes down to the mind. “The mind is everything. What you think you become,” he said.

3. Protect Your Mind and Your Mouth

So many of our issues and anxieties emerge because there was no skillful management between the mind and the mouth. Those kinds of issues severely limit any feeling of freedom and spaciousness.

Atisha, the 10th-century Indian sage who brought Buddhism to Tibet, taught: “Among many, watch your speech; when alone, watch your mind.” His single statement produces this essential Buddhist caution: An unmanaged, unhinged mind is dangerous and flawed. And, the opening for those faults and flaws to emerge is the mouth.

Right mindfulness and right speech belong together. A Buddhist text, the Anguttara Nikaya, records this wisdom from the Buddha about right speech: “It is spoken at the right time. It is spoken in truth. It is spoken affectionately. It is spoken beneficially. It is spoken with a mind of goodwill.” So, take a deep breath and pause before speaking when you are troubled, irritated, frustrated, or angry. As soon as the words are out of the mouth, they cannot be retrieved.

Too often, our life direction is placed before us by others. If you’re not doing what you feel is meaningful and important, then any sense of freedom will be absent. Consider the experience of Tanaaz Chubb: “I remember being in school and the pressure that was put on you to get good grades so you could go to a good college, get a degree, and get a good job. At the time I didn’t really question the truth of why any of that was important, I just believed that I had to because that’s what everyone was telling me and that’s what was expected of me. It wasn’t until I had my spiritual awakening that I realized life is so much more than that, and good grades and having a ‘respectable’ profession was pretty meaningless to me and the type of life I wanted to lead for myself. I wanted to forge my own path, and I wanted the freedom to follow my own intuition and creativity.” Consequently, she left her job—becoming a successful blogger and author of several books, including The Power of Positive Energy.

5. Recite This Mantra: Not So Bad

Zen Buddhist teacher and author Natalie Goldberg tells about a grandmother in her family. When she was 26 and living in France, the Nazis came to Paris and one of the first things they did was take that woman’s parents. The Nazis explained they were going to work camps to help the war effort. Then the Nazis came and took all the men in the family, so soon the woman’s husband and brother were gone as well. Again, the Nazis came, this time taking women and children. The woman realized that everyone was being taken and she understood that nobody was coming back.

So, before they came for her, a 26-year-old woman with a five-year-old daughter, she made contact with resistance movements who helped her and her daughter go into hiding for three years. The woman, whose life previously was that of a homemaker, wife, and mother, worked with the underground, hiding out in small French towns and villages doing whatever she need to survive.

Natalie Goldberg says that the woman made her way to the United States. Whenever any of her grandchildren or great-grandchildren come to her with an issue, saying “I was downsized today and lost my job,” the grandmother listens quietly, carefully, respectfully, and then simply says “Not so bad!”

Those prone to anger generate additional stress in their lives as well as in the lives of others. It doesn’t have to be that way. “Anger doesn’t just happen to us. If we’re able to catch an angry thought as it’s budding, we can let it go,” is a reminder from Buddhist author John Daido Loori.

Here’s a Buddhist story that is instructive for defusing anger. With permission from the monastery abbott, a Buddhist monk borrowed an old boat and rowed out into the middle of a lake for his afternoon meditation session. It was a truly peaceful place to meditate as the boat gently floated. After more than an hour of undisturbed silence, he felt the bump of another boat bang against his. With eyes still closed, he could feel anger swelling within himself at the careless boatman who didn’t prevent the lake collision.

Upon opening his eyes, all he saw was an empty boat, which he realized had obviously become untied from the dock and merely drifted out into the lake, bumping up against his. Immediately, the monk experienced a flash of enlightenment, one which would serve him well for the rest of his life. “The anger is within me,” he thought to himself. “All anger needs is a bump from the outside to be triggered and provoked out of me.” From that moment on, whenever another person irritated him and he could feel even the slightest anger rising, he gently reminded himself: “The other person is an empty, floating boat. The anger is within me.”