An Insight From Two Days Of Silence

by Chris Allen: On a spiritual path, we can expect forever occurring insights of wisdom… 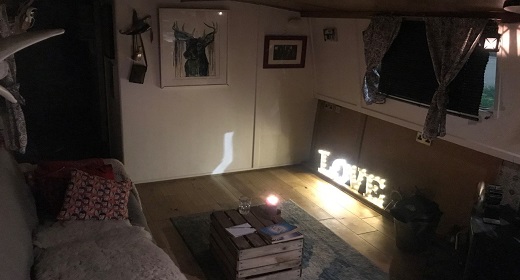 The setting for the two days of silence was a canal boat in West London.

With each insight we gain, we move closer to our true self and a deeper understanding of a reality which sadly is unattained by so many (including our previous self) yet it is a place that promises the attainment of pure joy, freedom, and Inner peace.

The silence itself was forty-six hours on a London canal boat where I currently reside. Myself and a female friend, in silence. Rising at 7 am we would start with a warm cup of Twinings No 29 and then into the first of our Meditations. Throughout the day we would give time to do yoga, listen to talks from Eckhart Tolle and Thich Nhat Hanh, and a couple of guided meditations from Mooji. Plus the odd game of chess. Not exactly the best activity for a restful mind, chess. But it was invented in India so I’m pretty sure that makes it a spiritual pass time?

What I have to say is nothing that hasn’t been said before. But as appose to hearing the insight from someone enlightened, I am not. True, I have had an awakening. What is also true of someone who has had an awakening is there is no greater desire from that person, for every other being to awaken also. Many of the things we read we can understand conceptually but experiencing it is another thing. These moments of understanding and an awareness of some newfound wisdom are what make the commitment completely worth it. With each insight gained, we are drawn closer to what is always there. The understandings I gained from just two days of silence Is why being gifted a book such as ‘The Power of Now’ by Eckhart Tolle will pay off eventually if not quite understood at the time. Don’t give up your search at the end of a book because you perhaps understood it but lack the experience to truly believe it.

A decision to go into silence is perhaps not the easiest of first steps into an awakening. To the unconscious being, left alone with our thoughts can be hard without an understanding of their true nature. This isn’t something I would have undergone two years ago but I have since found the space beyond my thoughts. I am aware therefore that my thoughts are not me. And that the constant talking in my head is a false reality projected upon me.

The day leading up to my two days of silence had led me to believe this was the right time to go into the fast. I was able to observe my thoughts that day on more occasions than ever before. This observation is an awareness that brings me back to my true self, to consciousness. As the observations have increased over the past two years I have been able to study my habits. Habits such as running through future conversations with people or planning for my next hour ahead.

If what many of us understand is that staying truly present allows you to be conscious and that the talking in your head is the ego playing tricks on you then how do we go about staying in these moments longer? What I noticed during my silence is how much my attention is taken away from the present. And how quickly I can go from one moment being solely focused on a task and then further down the line catching the talking in my head as my thoughts had led me on to a false reality. Thoughts of a previous relationship for example and pondering on a different outcome had I made a different decision. This is the mind transfixing on the past and bringing it into a false reality. I also was able to spot how quickly my mind can go from being focused on say my meal in front of me. Consciously giving my full attention to the plate of food, the smells, the taste, and the textures as I slowly bite on each piece of broccoli. To then halfway through that task (the attention) I’m onto the next step in my head and a future has been created in the form of thought of what’s for dessert. My final meditation of the silence was able to put these observations together and what I had read from previous spiritual teachers suddenly connected with me. Time is an illusion. There is no past and no future. Psychological time is thought made, false reality. Each time I became present during this meditation (free of thought) I was able to see this. All there is, is the now. It finally made sense on not just a conceptual level. Through experience and observation. Future fantasies and past reflections are not real. Even if they were real or became real. They are only real in the now.

But let’s be honest how often are we free of thought? You might not even of had that first glimpse of the other, the awareness of your thoughts. But if you have I’m proof along with many others that these moments do increase and just like in his book, Eckhart said they would. And the more you spot your thoughts, the less control they have over you. You become the space between your thoughts.

My advice to myself and you is to first take control of your attention and where you give it. How can we expect to observe our thoughts in a daily routine in which we are doing so many things at once? Don’t eat and watch Television. Those are two tasks for our attention. Add our thoughts and you have three. How can we expect to be present? If you are reading a book, do just that. If you are eating food, do just that. If you are putting on your shoes, give them your full attention. And if you are watching Television don’t also be involved in WhatsApp conversations. I’ve taken the decision personally to delete WhatsApp. I say brilliant, so you are connecting with your friends and family 24/7 but you seem to be overlooking the most important connection of all. Yourself. It’s okay to be alone and silence is not the opposite of fun. It’s where you will find most joy but only once you have allowed for self-discovery.

Stop giving your attention away so easily. You deserve it more than anyone else. Pay attention to every step you make, every sip of tea you take, and please. Slow down, take a breath, find the space, the silence. Catch your thoughts and realise there’s someone else beyond them. An infinite dimension with so much knowledge to give. This silent awareness of nothingness will awaken you to a feeling of completeness. Peace of mind. Freedom at last.

Chris Allen is a London-based writer. He initially got into writing through performing stand-up comedy for five years on the London circuit. He reached the NATY Final in 2019 performing at The Hackney Empire. His review that night from the Evening standard was ‘Chris Allen showed potential but is yet to find his voice’ Chris would argue he’s now found his voice, and that it is spreading the message of consciousness through both presence and his creative work. Chris decided to quit stand-up comedy the moment he realised he had put too much focus on the end goal as a means to a happier existence. Then, the process of self-discovery started, and the powers of the universe led him to an awakening. He now writes with no end goal, and creating has never been more pleasant. Funny how a return to the source of creation will bring a being to create more freely.