by Olivia Rosane: Yet another study has confirmed the unprecedented impacts of the climate crisis: Sea levels along the eastern U.S. are rising at their fastest rate in 2,000 years… 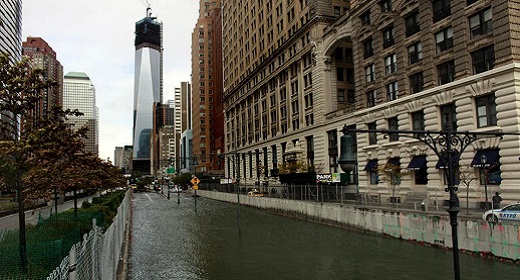 Researchers led by a team at the University of Rutgers studied sea level rise at six sites along the Atlantic coast. They found that the rate of change between 1900 and 2000 was more than double the average for the period between year 0 and 1800, Rutgers Today reported.

“The increasing influence of the global component is the most significant change in the sea-level budgets at all six sites,” the study authors wrote.

The research, published in Nature Communications on Tuesday, focused on sea level sites in Connecticut, New York City, North Jersey, South Jersey (Leeds Point and Cape May Courthouse) and North Carolina. The scientists examined sea-level budgets, which are the totality of regional, local and global factors that influence sea level change. Examples of regional factors include land subsidence, or sinking, while local factors include groundwater withdrawal, Rutgers Today explained. The study is the first to examine these factors across a large time frame at the Atlantic sites. Most sea level budget studies have only focused on the 20th and 21st centuries, and only on the global level.

The research found that the dominant force driving sea level change had shifted. During the totality of the 2,000 year period, land subsidence caused by the retreating Laurentide ice sheet drove the change.

However, in the last century, global forces took over.

“Where it used to be this regional land sinking being the dominant force, now it’s this global component, which is driven by the ice melt and warming of the oceans,” Jennifer S. Walker, lead author and Rutgers University-New Brunswick postdoctoral associate, told CNN.

Since 1950, the global climate crisis has driven 36 to 50 percent of sea level rise at all six sites, the authors determined.

The findings aren’t only important for understanding the scale of the current crisis, but also for helping policymakers deal with its consequences. Rising sea levels can increase sunny-day floods and make storms such as 2012’s Hurricane Sandy more extreme.

“The impacts from a big storm like that are just going to be exacerbated on top of (the rising seas),” Walker told CNN.

That is why the study chose to study individual locations across a wide period.

“Having a thorough understanding of sea-level change at sites over the long-term is imperative for regional and local planning and responding to future sea-level rise,” Walker told Rutgers Today. “By learning how different processes vary over time and contribute to sea-level change, we can more accurately estimate future contributions at specific sites.”