Clock’s Running Out On Climate Change 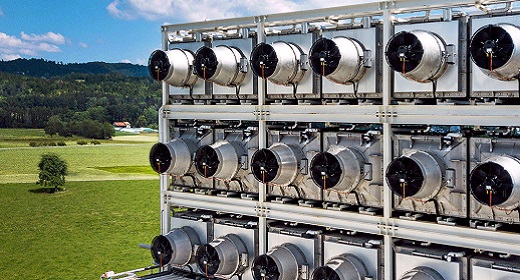 Solar panels, wind turbines and electric cars will go far in helping California and the Biden administration meet their aggressive climate goals — but not far enough. As time runs short, scientists and government officials say the moment to break out the giant vacuums has arrived.

The art of industrial-scale carbon removal — sucking emissions from the atmosphere and storing them underground — has long been an afterthought in climate-action circles: too expensive, too controversial, too unproven.

But as the deadline to avert climate catastrophe barrels nearer, the Biden administration is making the technologies prominent in its plans, and California is scrambling to figure out how to put them to use.

It is no small undertaking. Installing sci-fi-type machinery to pull carbon from the air — or divert it from refineries, power plants and industrial operations — and bottle it up deep underground is a monumentally expensive and logistically daunting challenge. It is one climate leaders now have no choice but to try to meet as they race to keep global temperatures from rising more than 1.5 degrees Celsius, the central commitment of the Paris Agreement on Climate Change, which aims to avert cataclysmic effects.

“To have any chance of holding warming below that level, you can’t do it simply by limiting emissions,” said Ken Alex, a senior policy advisor to former California Gov. Jerry Brown who now directs Project Climate at the UC Berkeley School of Law. “You have to sequester significant amounts of carbon.”

The recognition has pushed state regulators to start drafting blueprints for what could be one of the larger infrastructure undertakings in California history. Millions of tons of carbon dioxide would need to be captured and compressed into liquid form, at which point it would be either buried throughout the state or converted into materials for industrial uses such as manufacturing plastic and cement.

The state is essentially starting from zero. There are no large-scale carbon-removal projects operating in California.

Pipelines need to be built, vast geological reservoirs deep underground need to be fashioned into carbon dioxide storage facilities, costly new technologies for vacuuming carbon from the air and factories need to be brought up to scale.

“We need to see some pilot projects and test them out as soon as possible,” said Rajinder Sahota, deputy executive officer for Climate Change and Research at the California Air Resources Board. “All of the modeling we have says if we don’t start investing in a significant amount of this in this decade, we will not be set up to reach California’s goal of carbon neutrality by mid-century.”

The acknowledgement has sparked a surge of interest from investors and energy startups trying to scale up technologies that only recently were considered a money sink. Among the most ambitious are the backers of a process known as direct air capture, through which giant fans suck carbon from the atmosphere.

The technology has been deployed in modest demonstration projects — including one in Menlo Park — for years but never at a scale large enough to make a meaningful dent in emissions. With the cost of running the machines on the decline and the willingness to consider increasingly outside-the-box solutions on the rise, as well as a new administration in Washington promising an infusion of federal subsidies, the vacuum approach is suddenly getting a lot of attention.

“The question had always been, could we fund a multi-hundred-million-dollar plant, find a site and get it built?” said Steve Oldham, CEO of Carbon Engineering, a direct-air-capture company based in British Columbia. “The answer now is, fantastically, yes.”

California regulators are closely watching the progress of the hulking direct-air-capture facility the company is building with Occidental Petroleum in the Permian Basin of Texas. The 100-acre operation aims to capture up to 1 million metric tons of carbon dioxide each year.

Even if the Texas plant meets its goals, the carbon dioxide removed by it would reflect less than 1% of the emissions California needs to pull from the atmosphere to hit its climate targets, according to estimates by Lawrence Livermore National Laboratory.

“The models are telling us these approaches are essential, but we don’t yet know if they will be successful,” said Simon Nicholson, co-director of the Institute for Carbon Removal Law and Policy at American University in Washington. “There is lots of promise, lots of potential, but not yet lots of proof.”

There is also lots of consternation. The Carbon Engineering Texas project is a topic of hot debate among climate activists. To make the project pencil out financially, the carbon dioxide pulled from the air will be injected into the ground in a way that helps Occidental extract oil that can then be sold on the market.

Critics have long warned that fossil energy firms are looking to the technologies to delay the transition to more sustainable fuels. The oil generated at the Texas facility will likely qualify as an environmentally friendly fuel in California under the state’s Low Carbon Fuel Standard.

Carbon Engineering is promising that oil extraction is not in its long-term future. The oil revenues, the company says, make it possible to get early plants built. The hope is the costs of the plants will get much cheaper as the technology is put to widespread use, making it economical to just bury the carbon dioxide in the ground.

The European company Climeworks has taken a different route, using modular units to build smaller operations across the continent. Its biggest, in Iceland, will go online soon, collecting 4,000 tons of carbon dioxide annually. That would be dwarfed by what Carbon Engineering is projecting in Texas. But there is no fossil fuel component to the Climeworks projects.

“This is scalable,” said Christoph Beuttler, a manager at Climeworks. “We can get the costs down. Just imagine we were talking about solar panels in the 1990s and how far the prices have dropped. We think the same thing can be achieved here. “

California officials say direct-air-capture developers are eyeing where in the state they can build. Some are looking toward remote areas in Northern California where they could tap into geothermal energy, as Climeworks will do to power its Icelandic plant. Others are more focused on the deep underground basins of the Central Valley, suitable for storing billions of tons of carbon dioxide.

The vacuums are just one of many technologies California and other states are investigating in their sprint toward carbon removal. Back in Washington, there is a bipartisan push to allocate billions of dollars to the construction of pipelines and storage facilities for all the carbon dioxide lawmakers envision will be diverted underground in the coming years.

One of the first projects moving forward in California targets agriculture and wood waste that would otherwise be burned, resulting in greenhouse gas emissions. It aims to convert the waste into zero emissions power using a pioneering gasification process. The emissions created during production would be trapped and buried underground.

Other efforts are focused on the potential to trap greenhouse gases at factories for such things as cement and steel. Their production is emissions intensive due to the high heat temperatures needed and chemical reactions involved, and the only option for canceling out those emissions is diverting and burying the carbon dioxide.

“Some of these facilities cannot or will not be shut down, replaced or switched to carbon-free fuels quickly enough … to contain climate change at manageable levels,” said a recent report from Lawrence Livermore National Laboratory urging California to become a carbon removal leader.

The race to bring carbon removal technologies to market is getting a boost from billionaire Elon Musk. On Thursday, Earth Day, his XPrize will launch a $100-million contest aimed at inspiring teams of innovators to develop carbon removal projects capable of being scaled “massively to gigaton levels, locking away CO2 permanently in an environmentally benign way.”

Groups of scientists have meanwhile been drafting blueprints for California’s transition into the new technologies. An exhaustive study by Stanford and the Energy Futures Initiative identified 76 existing factories, power plants and other facilities in the state where carbon capture technology could be used to remove 59 million metric tons of greenhouse gas annually by 2030.

The report also noted the state’s landscape left it with adequate space to store more trapped carbon dioxide than most places in the country, with room to stow away 70 billion tons of it, mostly in the Central Valley. It could go into underground basins that extend for many miles across large swaths of the state, the report says.

California is getting to the party late. Other states began experimenting with carbon removal years ago, with most early pilot projects aimed at boosting the viability of fossil fuels — fitting facilities such as coal plants with carbon capture mechanisms. But California hedged, more focused on moving away from fossil fuels altogether.

The one big carbon capture project the state tried was a flop. The effort in Kern County aimed to revive coal at a time the fuel was already long out of fashion in the state.

“Bringing coal into California and then trying to clean it up was not a good start,” said Robert Weisenmiller, a former chair of the California Energy Commission. “It just got weirder and weirder. The costs kept going up, and it spiraled out.” The plug was pulled in 2016, before the plant went online.

Now, California is taking another crack at the carbon removal puzzle as it consolidates its position as the nation’s leader on climate.

“The state’s goal is to get to zero net carbon,” Weisenmiller said. “It is not enough just to reduce the emissions we put into the atmosphere. At the end of the day, you have to pull some out.”