How Plastics Are Making Us Infertile

by Mathew Rozca: In an interview, Dr. Shanna Swan explains how sperm counts are dropping every year thanks to plastic pollution… 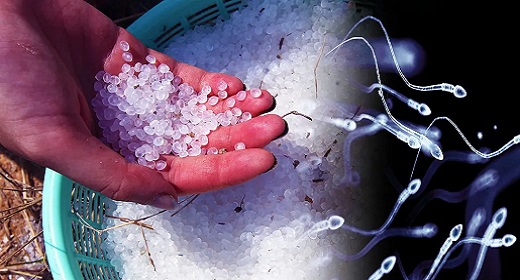 limate change is rightly cited as an environmental crisis that could lead to human extinction. Yet there is another pollution issue, indirectly related, that could make it literally impossible for human beings to reproduce.

I am talking, of course, about plastic pollution.

Dr. Shanna Swan, a professor of environmental medicine and public health at Mount Sinai school of medicine in New York City, has a new book out called “Count Down: How Our Modern World Is Threatening Sperm Counts, Altering Male and Female Reproductive Development, and Imperiling the Future of the Human Race.” In it she describes how various chemicals commonly found in plastic products are leading to a decline in fertility. The most striking example of this is in dropping sperm counts; if you have fewer than 15 million sperm per milliliter of semen, you are considered to have a low sperm count. Human beings are rapidly reaching that point, as Swan demonstrates in her book.

Salon spoke with her about this issue over the phone; as always, this interview has been edited for length and clarity.

The thesis of my book is that reproductive health in men and women has been declining dramatically at least over the past 40 years, and that a major part of that decline is linked to everyday exposure to chemicals in the environment that can affect our hormone system. There’s a lot in there and we can spread that all out, but that’s the overall thesis. There has been this downfall, if you will, a decline in reproductive health in many aspects. It impacts men and women. And if you look to the causes, a major cause — although not the only cause — is the presence in our daily lives of chemicals that are hormonally active.

What is an endocrine disruptor and what are the tangible effects that we have seen it have on, for instance, sperm counts or important aspects of female reproductive health?

First of all, an endocrine disruptor is a chemical that impacts the body’s endogenous natural hormone function. And by impact, it could be increases, slows, or interferes with in various ways. The most profound way they do that is by disturbing prenatal development so that the exposure to the pregnant woman early in pregnancy is going to have the biggest impact on later reproductive health and function in the offspring.

I know that there has been a drop in sperm counts since the 1970s. Could you elaborate a little more on the data there?

It took two years of seven people working pretty hard on this to get the simple fact that sperm concentration dropped between between 1973 and 2011 from 99 million per milliliter to 47 million per milliliter. That’s the work that went into that one sentence. Those kind of data are not available for any other outcomes. They’re just not. It’s just this combination of consistency of method. And by the way, that’s the numbers for Western men.

I should say that we divided the studies further into four categories. One of them was geographic. One of them was the kind of man it was. So we separated Western men from non-Western men. And Western was Europe, North America, Australia, New Zealand — all this is in the paper, of course.

And the reason we did that is because the studies from other countries were different in many ways, including when they were published. Statistically it was more appropriate to separate them. When we did that, we saw there were very few studies in non-Western countries, not enough to really draw any conclusion. So what I told you with those numbers, that’s Western studies. And the other countries, as I say, the numbers are too small to draw a conclusion.

Then we further divided the men into two big categories. One is, were they partners of pregnant women? Were their partners pregnant, or had they fathered a child? Those are the fathers, that’s the group we called fertile men. And the reason we separated them is because they cannot demonstrate the same kind of decline because if their count was sufficiently low, they would not be fathers. So just being a father selects you into a certain category as sperm count.

We also see declines in testosterone in several studies around the world. We see increases in erectile dysfunction. We see increases in rates of genital abnormalities. There is quite a lot of data on that. We see increases in testicular cancer rates. We see increases, on the female side, in diminished ovarian reserve, which means that a woman does not have as many eggs left when she gets older as she might need to conceive. An increase in miscarriage, but perhaps the most important after sperm count is fertility.

So then you ask, what could be causing this? And before I go to the chemicals, I want to say, we’re not dismissing the many, many lifestyle factors that can influence reproduction and sperm count. There are things like smoking, binge drinking, obesity, stress, poor diet, et cetera.

Those things would not entirely explain this decline because they haven’t been increasing at overall at the same rate, whereas the production of chemicals — and particularly the production of plasticizers and plastic products — has been actually even faster than the 1% per year [decrease in fertility]. So it’s actually been exponential.

Let’s turn to those chemicals. So why did I look at the chemicals I looked at? I looked at phthalates particularly, and bisphenols secondarily, and then other chemicals that other people are looking at.

So I have to talk a little bit more about the science, because otherwise it doesn’t make any sense. So in utero, in the womb, the fetus is developing first from obviously a few cells. And then pretty soon there is something called the genital ridge. It’s, what’s going to become the genital tract. It’s just a single ridge. It’s the same in boys and girls, not differentiated. So that’s the undifferentiated state of the genitals. Then how does it become male typical and female typical? Well, it needs testosterone in the male. So the male has to have enough testosterone at a certain time, a delicately programmed time, by the way, genetically programmed, which is in the first trimester. And then when the testosterone is present made by the fetal testes, then the male genitals starts to develop in the male typical way that we expect.

That’s what’s expected in an XY individual in a genetic male, and that male will develop it as usual, and then if all is good, he’ll have adequate sperm count and he’ll be fertile and he’ll not have genital birth defects and he’ll not develop testicular cancer and all these things that can happen when there isn’t enough.