by Elias Marat: An increasing number of schools across the country are introducing mindfulness practice and yoga classes to address student anxiety, tardiness, and disruptions… 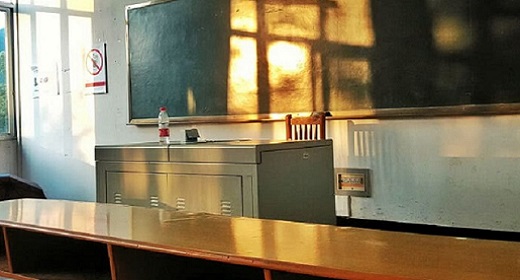 The alternative approach to school discipline seeks to address student misbehavior by addressing one of its root causes —namely, allowing students to ground themselves in their senses and calm their emotions.

For half an hour every Monday following the end of the class day, students gather in Donna Haller’s classroom to sit on blankets and meditate, allowing themselves to calm down and concentrate on stillness, feeling present, and boosting their awareness of themselves and their classroom environments.

And on Wednesday, students at both schools can go to their shared library to take part in a yoga club.

And as those of us who experienced detention back in K-12 schools know well, sitting alone at one’s desk for an hour after school hardly leads to personal reflection or changed behavior —a point that Principal Hatert is all too willing to stress.

For ninth-grader Isabella Beiring, who attends both the Monday and Wednesday groups, the sessions offer a great respite from the hustle and bustle of the school week. She explained:

“I like learning about yoga and mindfulness in general.

I like doing the poses … It can help with stress and anxiety.”

The Yellow Springs initiative is the result of Ohio’s new statewide educational approach. Dubbed Each Child, Our Future, the plan hopes to offer mindfulness training and other resources as a way of addressing a mental health epidemic that plagues adolescents and adults alike across the United States.

Among the three fundamentals of the program is social-emotional learning (SEL), which describes the “processes through which children and adults acquire and effectively apply the knowledge, attitudes and skills necessary to understand and manage emotions, set and achieve positive goals, feel and show empathy for others, establish and maintain positive relationships and make responsible decisions.”

The Yellow Springs campuses aren’t alone in offering meditation, mindfulness, and yoga as options to students.

According to a 2015 survey by the National Institute of Health, over 940 schools across the U.S. offer yoga. And according to federal data, U.S. children practicing yoga rose from 2.3 percent to 8.4 percent —1.3 million to 4.9 million children —between 2007 and 2017, a trend that has likely only increased.

Research has shown that there are myriad benefits to meditation and mindfulness training, including improved responses to stress, processing past events including trauma, as well as boosted social engagement and possibly academic performance.

Erica Sibinga, a professor of pediatrics at Johns Hopkins School of Medicine, told NPR that it is crucial that the exercises are conducted in a professional manner. She added:

“Mindfulness when delivered in a high-quality structured program can be beneficial for youth.

We can’t immediately assume it’s effective when delivered in other ways.”

One unlikely champion of the reformed approach is David Lynch, the iconoclastic director of such offbeat cult classic films as Blue Velvet, Lost Highway, and Twin Peaks: Fire Walk With Me. Through his foundation, Lynch started the Quiet Time program, which consists of two 15-minute sessions of transcendental meditation where students are instructed to breathe deeply, clear their minds, and find their center. The program has been used by the San Francisco Unified School District and other schools across the country.

According to the website for the David Lynch Foundation for Consciousness-Based Education and World Peace website, Quiet Time meditation programs have resulted in up to a 65 percent decrease in violent conflict, 40 percent reductions in stress and anxiety, and 86 percent reductions in suspensions over a two-year period. These drops have been accompanied by major boosts in self-confidence, creativity, and happiness.

Practices revolving around transcendental meditation are largely secularized variants of practices common in Eastern religions like Buddhism and Hinduism.

McKinney Middle School student Foster Shirkey offered a succinct explanation for how it makes him feel after his eight-grade classes:

“It helps me relax.”