by Trevor Mogg: Virgin Galactic has unveiled its latest suborbital aircraft that will one day take high-paying tourists on trips to the edge of space… 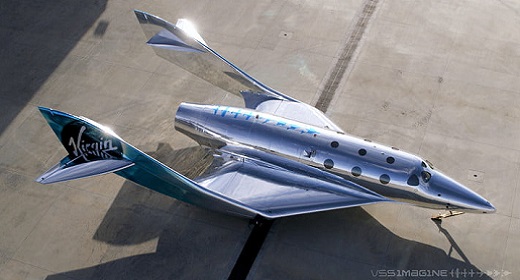 The company unveiled SpaceShip III, also known as VSS Imagine, in a short video presentation (below) on Tuesday, March 30.

Imagine, will take you there.

The company couldn’t resist weaving the shiny look into its launch blurb, pointing out how it “reflects our inherent human fascination with space and the transformative experience of spaceflight.”

Beyond that, there aren’t many details about the new aircraft, except that it features a modular design that will pave the way for easier maintenance and more flights, with the company targeting as many as 400 suborbital trips a year per aircraft.

VSS Imagine will soon begin ground testing, with glide flights planned for this summer from Virgin Galactic’s Spaceport America base in New Mexico. In the coming months, the company will also start building VSS Inspire, the second SpaceShip III vehicle within the Virgin Galactic fleet.

Virgin Galactic is aiming to launch tourism flights to the edge of space, competing with the likes of SpaceX and Blue Origin.

But at a reported $250,000 per seat, the flights won’t come cheap. Those who do fork out for the once-in-a-lifetime experience will begin their trip inside VSS Imagine, which itself will be carried part of the way up by a larger aircraft. When it reaches around 50,000 feet, Imagine will blast away from the carrier aircraft to fly to an altitude of around 62 miles — the generally agreed boundary of space — with stunning views and a brief period of weightlessness all part of the package. It will then return to Earth and land on a runway like a conventional aircraft.

“VSS Imagine and Inspire are stunning ships that will take our future astronauts on an incredible voyage to space, and their names reflect the aspirational nature of human spaceflight,” Michael Colglazier, CEO of Virgin Galactic, said in a release.

Virgin founder Richard Branson commented: “Virgin Galactic spaceships are built specifically to deliver a new, transforming perspective to the thousands of people who will soon be able to experience the wonder of space for themselves.”

He added: “As a SpaceShip III class of vehicle, Imagine is not just beautiful to look at, but represents Virgin Galactic’s growing fleet of spaceships. All great achievements, creations, and changes start with an idea. Our hope is for all those who travel to space to return with fresh perspectives and new ideas that will bring positive change to our planet.”