What You’re Saying When You Give Someone The Silent Treatment

by Daryl Austin: Social ostracism has been a common punishment for millennia. But freezing someone out harms both the victim and the perpetrator… 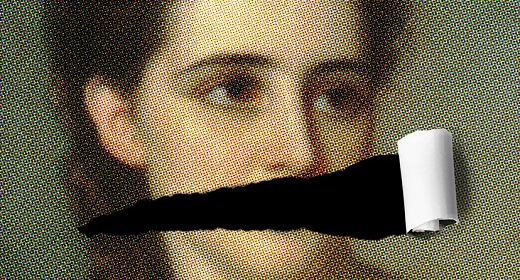 Kipling Williams has studied the effects of the silent treatment for more than 36 years, meeting hundreds of victims and perpetrators in the process:

A grown woman whose father refused to speak with her for six months at a time as punishment throughout her life. “Her father died during one of those dreaded periods,” Williams told me. “When she visited him at the hospital shortly before his death, he turned away from her and wouldn’t break his silence even to say goodbye.”

A father who stopped talking to his teenage son and couldn’t start again, despite the harm he knew he was causing. “The isolation made my son change from a happy, vibrant boy to a spineless jellyfish, and I knew I was the cause,” the father said to Williams.

A wife whose husband severed communication with her early in their marriage. “She endured four decades of silence that started with a minor disagreement and only ended when her husband died,” Williams said. Forty years of eating meals by herself, watching television by herself—40 years of being invisible. “When I asked her why she stayed with him for all that time,” Williams said, “she answered simply, ‘Because at least he kept a roof over my head.’”

A teacher. A sibling. A grandparent. A friend. Each story that Williams, a psychology professor at Purdue University, told me was more heartbreaking than the one before. As I listened, the question that lingered most was How could these people do this to those closest to them?

The silent treatment goes by many names: shunning, social isolation, stonewalling, ghosting. Although psychologists have nuanced definitions for each term, they are all essentially forms of ostracism. And the tactic is nothing new. Ancient Greeks expelled for 10 years citizens who were thought to be a threat to democracy, and early American settlers banished people accused of practicing witchcraft. Religions have frozen out individuals for centuries: Catholics call it excommunication, herem is the highest form of punishment in Judaism, and the Amish practice Meidung. The Church of Scientology recommends total “disconnection” from anyone deemed antagonistic toward the religion.

“My research suggests that two in three individuals have used the silent treatment against someone else; even more have had it done to them,” Williams said. Experts told me that although they need more data to know for certain, instances of the silent treatment have likely increased over the years as new forms of communication have been invented. “Every new method of connection can be used as a form of disconnection,” Williams said.

Ostracism can also manifest in lesser ways: someone walking out of the room in the middle of a conversation, a friend at school looking the other way when you wave at them, or a person addressing comments from everyone in a message thread except you. “Partial ostracism,” Williams told me, might mean monosyllabic replies—a terse period at the end of a one-word text message. But in serious cases, ostracism can take a heavy toll whereby victims become anxious, withdrawn, depressed, or even suicidal.

“Because we humans require social contact for our mental health, the ramifications of isolation can be severe,” Joel Cooper, a psychology professor at Princeton, told me. “In the short term, the silent treatment causes stress. In the long term, the stress can be considered abuse.”

The silent treatment is a particularly insidious form of abuse because it might force the victim to reconcile with the perpetrator in an effort to end the behavior, even if the victim doesn’t know why they’re apologizing. “It’s especially controlling because it deprives both sides from weighing in,” Williams said. “One person does it to the other person, and that person can’t do anything about it.”

The silent treatment might be employed by passive personality types to avoid conflict and confrontation, while strong personality types use it to punish or control. Some people may not even consciously choose it at all. “A person may be flooded with feelings they can’t put into words, so they just shut down,” Anne Fishel, the director of the Family and Couples Therapy Program at Massachusetts General Hospital, told me. But regardless of the reason for the silent treatment, it can be received by victims as ostracism.

One study found that social rejection provoked a response in its victims similar to that of victims of physical abuse; the anterior cingulate cortex area of the brain—the area thought to interpret emotion and pain—was active in both instances. “Exclusion and rejection literally hurt,” John Bargh, a psychology professor at Yale, told me.

But the silent treatment ultimately harms the person causing it, too. Humans are predisposed to reciprocate social cues, so ignoring someone goes against our nature, Williams said. The perpetrator is therefore forced to justify the behavior in order to keep doing it; they keep in mind all the reasons they’re choosing to ignore someone. “You end up living in a constant state of anger and negativity,” Williams said.

Worse, the silent treatment can become addictive. The father who couldn’t force himself to speak to his son again suffered the way many addicts suffer—through repeating an activity despite knowing its harm. “Most people who start giving the silent treatment never intend for it to go on for as long as it does, but it can be very difficult to stop,” Williams told me. “It’s psychological quicksand.”

The silent treatment is different from simply cooling off in the midst of a heated debate. One way to prevent a conflict from curdling into ostracism is to say out loud the exact amount of time you’ll be taking a break and to establish a timeline for when you’ll pick the conversation back up, Williams said. In some circumstances, it’s okay for unhealthy relationships to end abruptly, without notice, and with no expectation to resume—such as when a spouse or partner is physically abusive.

But when someone is using the silent treatment to exclude, punish, or control, the victim should tell the perpetrator that they wish to resolve the issue. To “voice the pain of being ignored” is a constructive way of expressing one’s feelings, and may elicit a change if the relationship is truly founded on care, Margaret Clark, a psychology professor at Yale, told me in an email. Although a victim of ostracism should certainly apologize if they’ve done something hurtful, Fishel said, “it’s time to call a couple’s therapist” if your spouse uses the silent treatment tactically and often. “One of the worst feelings in an intimate relationship is to feel ignored,” she said. “It often feels better to engage in a conflict than to feel shut out completely.”

If the perpetrator still refuses to acknowledge the victim’s existence for long periods of time, it might be right to leave the relationship. In the end, whether it lasts four hours or four decades, the silent treatment says more about the person doing it than it does about the person receiving it.