by Lloyd Alter: The Passive House Institute has a new campaign to promote energy efficient buildings… 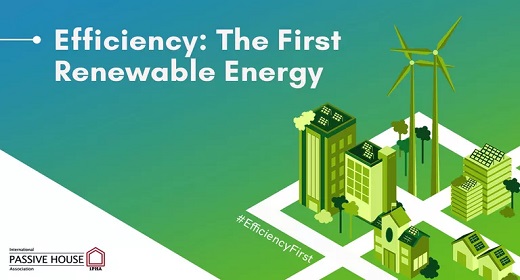 The International Passive House Association (iPHA) launched a campaign—”Efficiency: The First Renewable Energy“—with the goal “to raise awareness for the vital role energy efficiency in buildings plays in meeting our climate goals.” The iPHA is a global network of 22 affiliate organizations promoting the concept of Passive House; it has been promoting energy efficiency for its entire existence—it is the raison d’être of the movement. The new campaign raised some fundamental questions, like why now? And why this particular campaign?

What is Passive House?

Passive House or Passivhaus is a building concept where heat loss or gain through the walls, roof, and windows is drastically reduced by the use of insulation, high-quality windows, and careful sealing. It’s called “passive” because much of the heating required is met through “passive” sources such as solar radiation or the heat emitted by occupants and technical appliances.

According to the iPHA: “The campaign aims to raise awareness for the vital role energy efficiency in buildings plays in meeting our climate goals. The campaign also demonstrates that energy-efficient buildings provide a comfortable, healthy, and sustainable built environment.”

The concept of energy efficiency as a resource is not new either. It was originally proposed over 30 years ago by Amory Lovins of the Rocky Mountain Institute, in what he called “The Negawatt Revolution,” writing that “because it’s now generally cheaper to save fuel than to burn it, global warming, acid rain, and urban smog can be reduced not at a cost but at a profit.” He wrote of energy savings as a resource with real economic value.

We have been talking about energy efficiency since the 1970s, the RMI since the ’90s, and the Passive House movement since it started 25 years ago—perhaps we take it for granted. Furthermore, since the 2015 Paris Agreement, we have generally been talking a lot more about carbon, which we have to emit less of, than we have about energy, which can be carbon-free.

After watching Giorgia Tzar of the iPHA present the campaign (2:40 on video) on the Passive House Accelerator Happy Hour, I interviewed her to get a better understanding of why this campaign, and why now. She didn’t waste much time getting straight to the point.

“There has been a tendency of late among the energy and the building community to focus on embodied energy only, and what we are aiming to do here is not lose sight of the forest for the trees,” says Tzar. “Embodied carbon is very important, we can’t lose sight of that, but it is a one-time carbon investment. At the end of the day, we fundamentally have to deal with both, we just want to make sure that people are prioritizing an efficiency first approach, because 1) it is scientifically proven that the Passive House standard achieves that and 2) When we are looking at it from a full lifecycle [in a conventional building] operating emissions still make up the majority.”

A good reason for stressing efficiency first is that it creates the groundwork for renewable energy because so much less is needed. But the main thing, says Tzar, is they “just want to make sure that efficiency is still at the table.”

This is an issue we have discussed on Treehugger before, asking how do you sell the idea of Passive House? Everyone loves looking at solar panels and Powerwalls—so much to show your neighbors! But, as I previously pointed out: “By comparison, Passivhaus is boring. Imagine telling your neighbor, ‘Let me describe my air barrier,’ because you can’t even show it, or the insulation. It is all passive stuff that just sits there.”

It will be interesting to see if the message gets through or if it will still seem just as intangible and invisible as an air barrier. Discussing energy efficiency now is also a good pushback against the flavor of the month, net-zero, recently described by my colleague Sami Grover as “a recklessly cavalier ‘burn now, pay later’ approach.” A form of net-zero is popular in the green building world, where people put enough solar on the roofs of their not particularly efficient houses, sell the power in summer, buy it in winter, and hope to zero out what they supply and demand.

I have tried to make the case that it is far more important to reduce demand to as close to zero as possible; then you don’t need very much renewable power at all. This is is also a position made in the “Efficiency First” campaign—it is easy to go to true net-zero when it is such a small step.

Tzar notes that “people want a silver bullet,” but these are complicated and difficult issues to explain. “We need to worry about operating energy, embodied energy, and renewable energy, we need to deal with all of these things,” she says. “The complexity of the climate challenge, the carbon challenge, just seems insurmountable to some people, and that’s why we went with Efficiency First, and efficiency is the first renewable energy, we just wanted it to be easy access, to be comprehensible.”

This is the first big international campaign where all the various affiliate organizations cooperated and produced the brochure in 12 different languages. It may be aimed at the general public but it won’t hurt to put it in front of politicians and regulators or as a response to everyone promoting net-zero and hydrogen and even solar and wind that really, efficiency is a form of renewable energy, because kilowatt for kilowatt, it is cheaper and easier. And no matter what you are selling, put efficiency first.