This Powerful Tidal Turbine Will Power 2,000 Homes In The UK

by Vanessa Bates Ramirez: Renewable energy is having its moment in the sun. And in the wind. And, lesser known but equally relevant, in the water… 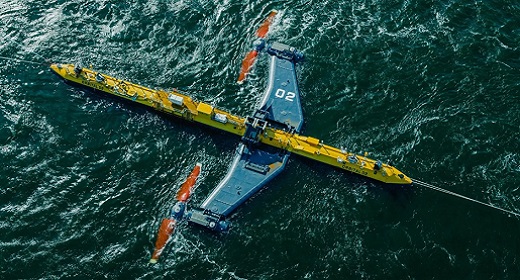 Tidal turbines don’t get as much buzz as solar and wind farms, and there are less of them out there, but the number is growing—and a unique new one is about to go live.

A Scottish company called Orbital Marine Power built what it’s calling the “most powerful tidal turbine in the world,” a system called the Orbital O2 2MW. They’re in process of getting it up and running near the Orkney Islands, which are located off the country’s northeast coast in the North Sea (this is also where Microsoft sank a cylinder full of servers to the bottom of the ocean!).

Tidal turbines are essentially an underwater version of wind turbines, functioning much the same way; the movement of water turns blades that are attached to a rotor, turning the rotor and powering a generator.

The biggest tidal power plant in the world is Sihwa Lake station in South Korea, which has a capacity of 254 megawatts (MW), followed by a 240MW station in La Rance, France (this is also the world’s oldest tidal plant, built between 1961-1966).

Both these plants use what’s called a barrage, which is a long underwater wall (the barrage at the La Rance plant, for example, is 476 feet long) with gates that open and close with the tides in a way that capitalizes on their energy production potential. This setup works well for generating high quantities of power with multiple turbines; Sihwa Lake has 10 turbines and La Rance has 24.

But these plants are extremely expensive to build ($298 million for Sihwa, $918 million for La Rance), leading some engineers and analysts to question whether the energy they produce is even worth the high cost.

Orbital’s technology is different. The O2 doesn’t require a barrage, and the turbines are attached to a 243-foot-long floating platform. Compared to its much larger cousins, the O2 is tiny—but it’s also mighty. Its two 65-foot rotors can reach an area of 6,460 square feet under water, because rather than only being able to turn in one direction, the turbine blades can adapt to the direction the tide is flowing.

The company hasn’t provided details around the cost to build the O2, but CEO Andrew Scott did emphasize its cost competitiveness, saying the turbine “will unlock tidal markets around the world at a competitive price point and provide regulators and investors with a new, predictable renewable energy option.”

Maintenance and repairs are meant to be relatively easy, as the turbines can be brought to the water’s surface by the same “arms” that attach them to the platform. No construction needs to be done at sea, either; the O2 is built on land before setting sail all ready to go, and is basically just a giant boat that needs to be anchored and connected to the grid; the energy the system produces gets routed back to land through submerged cables.

Orbital said in a press release that the O2 “has the ability to generate enough clean, predictable electricity to meet the demand of around 2,000 UK homes and offset approximately 2,200 tons of CO2 production per year.”

Mind you, UK homes are far less power-hungry than American homes, so the 2 megawatts of power that an O2 produces would likely not go as far on the other side of the Atlantic. But given the relative ease and low cost of deploying the turbine, it seems likely we’ll start to see more of them—maybe even in American waters.