by Edd Gent: A never-ending detonation could be the key to hypersonic flight and space planes that can seamlessly fly from Earth into orbit… 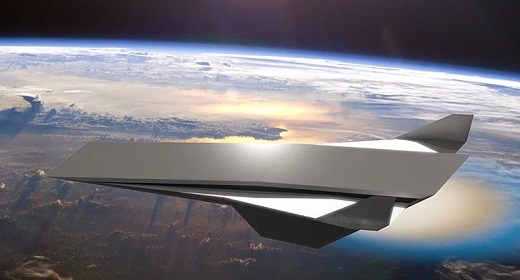 And now, researchers have recreated the explosive phenomenon in the lab that could make it possible.

Detonations are a particularly powerful kind of explosion that move outward faster than the speed of sound. The massive explosion that rocked the port of Beirut in Lebanon last August was a detonation, and the widespread destruction it caused demonstrates the huge amounts of energy they can produce.

Scientists have long dreamed of building aircraft engines that can harness this energy; such craft could theoretically fly from New York to London in under an hour. But detonations are incredibly hard to control and typically last less than a microsecond, so no one has yet been able to make them a reality.

Now, a team from the University of Central Florida has created an experimental setup that lets them sustain a detonation in a fixed position for several seconds, which the researchers say is a major step toward future hypersonic propulsion systems.

“What we’re trying to do here is to control that detonation,” said Kareem Ahmed, an associate professor of mechanical and aerospace engineering at the University of Central Florida, and lead author of a new paper on the research published Monday (May 10) in the journal Proceedings of the National Academy of Sciences.

“We want to freeze it in space and harness that energy. Rather than it destroying buildings, as you saw in Lebanon, now I want to use it and produce thrust with it,” Ahmed told Live Science.

“If we can do that, we can travel super fast.”

The breakthrough was built on decades of research into a theoretical propulsion system called an oblique detonation wave engine (ODWE).

The concept works by funneling a mixture of air and fuel at hypersonic speeds (more than five times the speed of sound) toward a ramp, which creates a shock wave. This shock wave rapidly heats up the fuel-air mixture and causes it to detonate, blasting exhaust gasses out from the back of the engine at high speed. The result? Lots of thrust.

When a mixture of air and fuel detonates in this way, the resulting combustion is extra efficient as close to 100 percent of the fuel is burned. The detonation also generates a lot of pressure, which means the engine can generate much more thrust than other approaches.

In theory, this detonation should be able to propel an aircraft at up to 17 times the speed of sound, say the researchers, which could be fast enough for spacecraft to simply fly out of the atmosphere, rather than needing to hitch a lift on rockets.

The challenge is sustaining the detonation for long enough to power such flight, and previous experimental demonstrations have topped out at just a few milliseconds. The main difficulty, Ahmed said, lies in preventing the detonation from traveling upstream toward the fuel source, where it can cause serious damage, or further downstream, where it will fizzle out.

“There’s always been the question of, “Well, if you’re holding it for a millisecond or so, did you just hold it temporarily?'” Ahmed said. “You don’t know if you’ve stabilized or not.”

To see if they could improve on the previous record, Ahmed and his colleagues built a roughly 2.5-foot-long (0.76 meters) series of chambers that mixes and heats air and hydrogen gas before accelerating it to hypersonic speeds and firing it at a ramp.

By carefully balancing the proportions of the air-fuel mixture, the speed of the gas flow and the angle of the ramp, they were able to generate a detonation that remained fixed in position for around 3 seconds.

That’s long enough to confirm that the detonation was stabilized in a fixed position and was not travelling up or downstream, Ahmed said, which is a first, major step toward realizing a real-life ODWE.

Frank Lu, a professor of mechanical and aerospace engineering at the University of Texas at Arlington who specializes in detonation-based engines, said demonstrating stable detonation is a significant achievement. To develop a practical engine researchers will now have to work out how to operate over a range of speeds and altitudes and deal with combustion instabilities caused by things like uneven mixing of the fuel and air.

“I think the investigators have done an excellent job and look forward to further results,” Lu told Live Science.

The researchers only ran their experiment for a few seconds mainly because the intensity of the detonation rapidly erodes the glass sides of the test chamber, Ahmed explained. They had to use glass in their initial tests so that they could make optical measurements of the detonation, but if they were to replace them with metal sides they should be able to run the detonation for much longer, he said.

And promisingly, Ahmed said the structure of the test apparatus is not that different from the design of a full-scale ODWE. The main challenge for the researchers now is working out how they can alter the three key ingredients of fuel mix, air speed and ramp angle while still maintaining the stability of the detonation.

“Now, we’ve demonstrated it is feasible, it’s more of an engineering problem to explore how to sustain it over a larger operating domain,” Ahmed said.