10 U.S. Wilderness Areas You Should Know 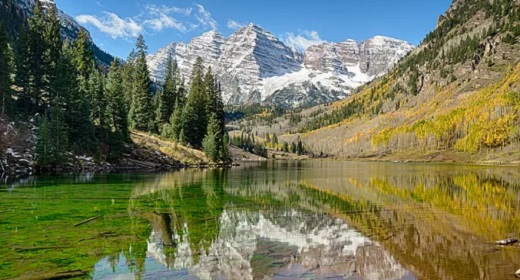 Every outdoor lover has a favorite national or state park, but when it comes to natural public lands, national forests are among the country’s most breathtaking and functional spaces. There are 155 national forests in the United States, all managed by the U.S. Forest Service under the Department of Agriculture. Unlike national parks, which are set aside specifically for the conservation of pristine natural areas and landmarks, national forests focus on resource preservation while ensuring a healthy ecosystem for both humans and wildlife.

Since 1905, national forests have provided Americans with not only recreational services, but also lumber, grazing areas, and vast mineral resources. In addition, these natural havens capture carbon, protect wildlife, produce clean drinking water, and give scientists a controlled environment to conduct research. The concept is not without its challenges, however, as threats like the climate crisis, wildfires, invasive species, and environmental policy continue to weigh heavily on the potential of these incredibly important lands.

Here are 15 awe-inspiring national forests in the United States that are sure to motivate you to step outside and appreciate nature. 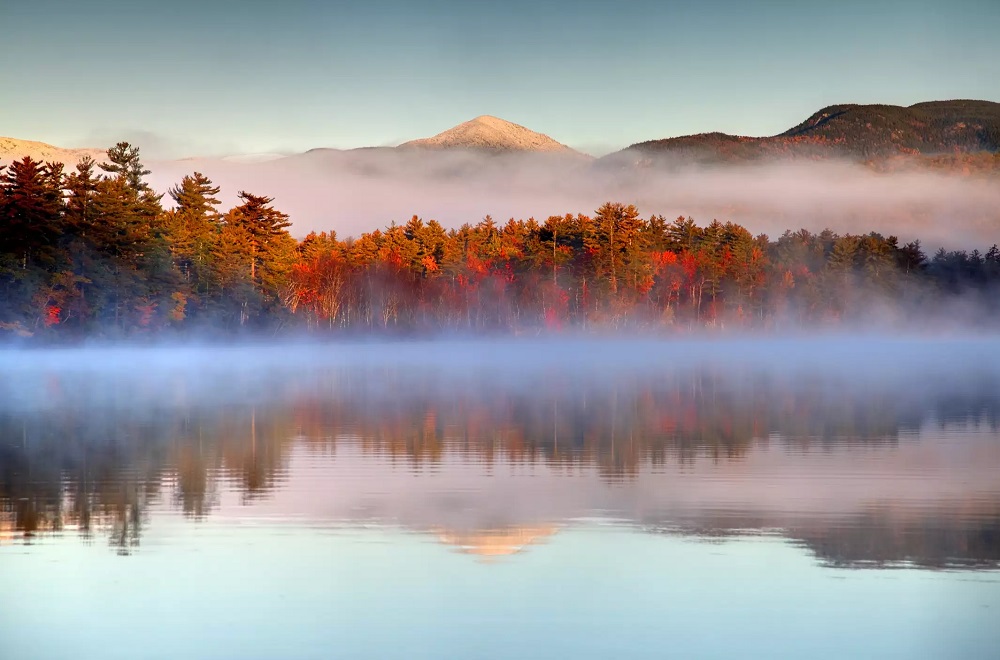 Tucked within the alpine White Mountains between New Hampshire and Maine, White Mountain National Forest encompasses 148,000 acres of wilderness. This forest is known especially for its vast water resources, including 12,000 acres of wetlands, over 4,000 miles of streams, 67 lakes, and 35 watersheds. The forest houses almost the entirety of Mount Washington, the highest peak in the northeastern United States, and is home to almost 200 species of birds, including the extremely rare Bicknell’s thrush. 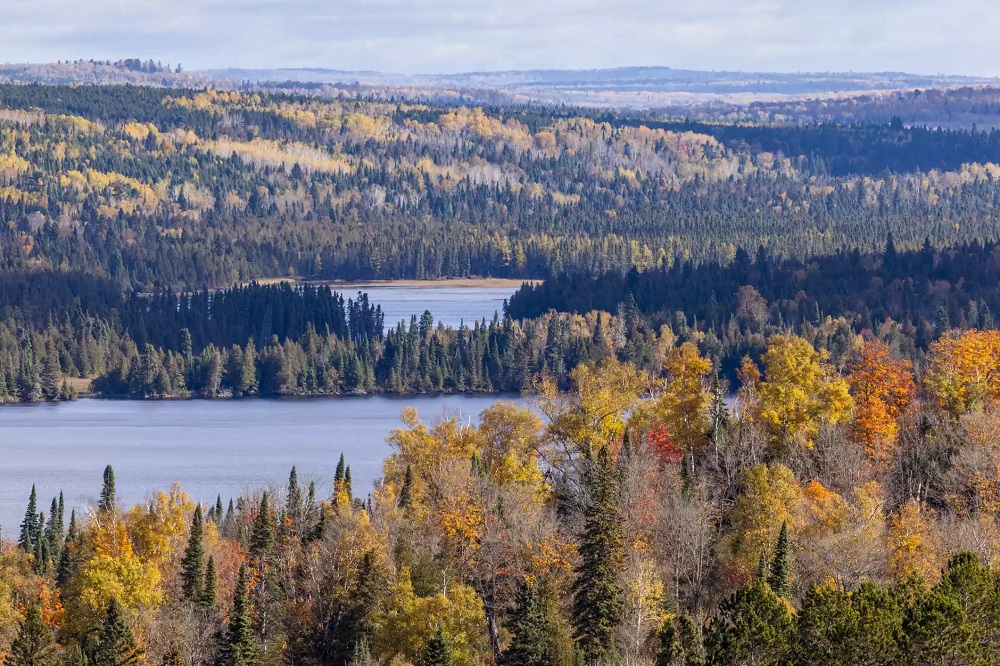 Superior National Forest made headlines in 2020 when The Nature Conservancy purchased over 2,000 acres of private land inside its borders to save it from development.2 Superior National Forest is located on the U.S.-Canada border, in Minnesota’s Arrowhead Region, on the edge of Lake Superior. Established in 1909, it is famous for its boreal forest ecosystem (a subarctic climate in the Northern Hemisphere) and its clean lakes (more than 695 square miles of the forest are surface water). With over 3 million acres in total, there are some pretty important animals who call this forest home, including black bears and gray wolves. 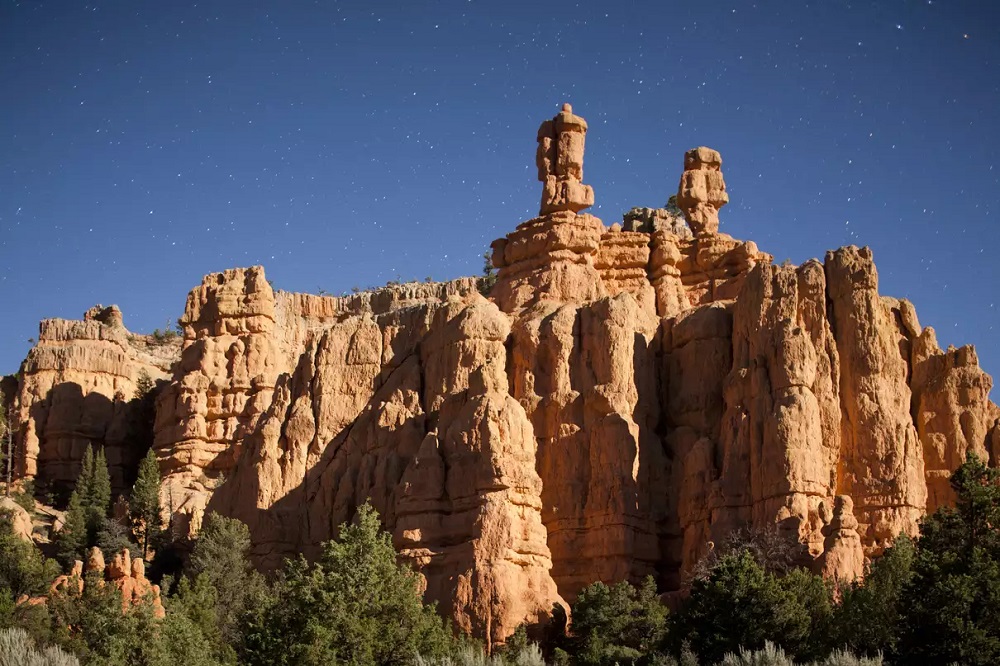 Dixie National Forest occupies almost 2 million acres between the Great Basin and the Colorado River, making it the largest national forest in the state of Utah. High altitudes ranging from 2,800 feet to 11,322 feet give this forest a plethora of climates. Summer temperatures can reach 100 degrees Fahrenheit near St. George, while winters can see 40 inches of rain and -30 degrees Fahrenheit on the mountain plateaus.

This part of southern Utah has a significant place in archeological history, as well, evidenced by pictographs, petroglyphs, and prehistoric dwellings inside the boundaries of the forest; these and other artifacts are studied and preserved by the Dixie National Forest Heritage Program. 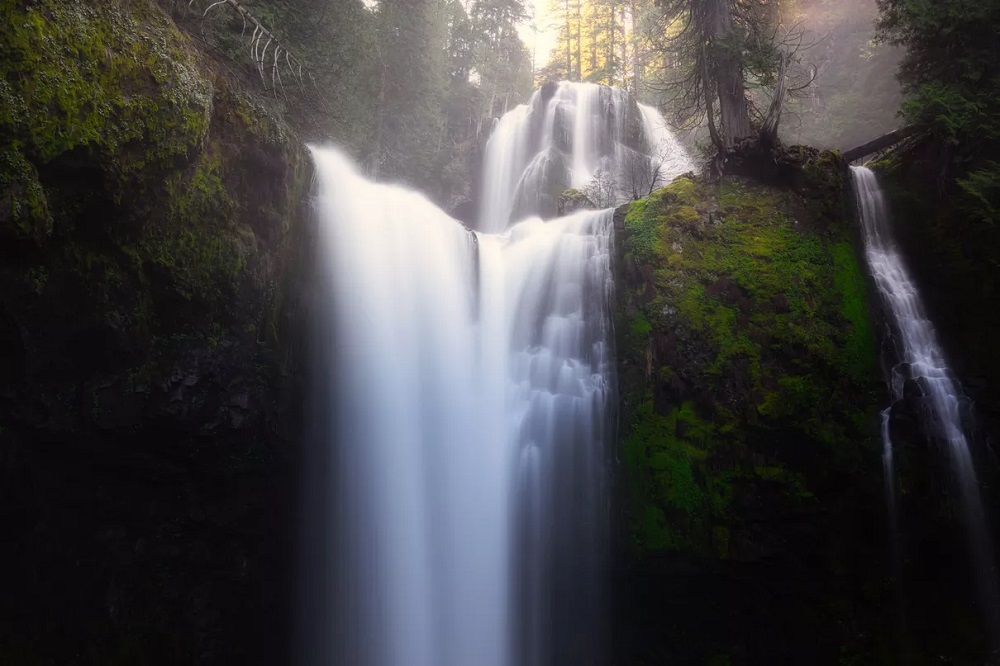 Located in southern Washington, Gifford Pinchot is one of the country’s oldest national forests. Its range features 1.3 million acres of mountains, valleys, rivers, waterfalls, and, most famously, volcanoes. Mount St. Helens, responsible for the most recent deadly volcanic eruption in the continental United States, erupted back in 1980. Two years later, President Ronald Reagan designated the 110,000 acres surrounding the volcano into Mount St. Helens National Volcanic Monument, which is still frequented by hikers to this day. The national forest is named after Gifford Pinchot, who served as the first head of the United States Forest Service. 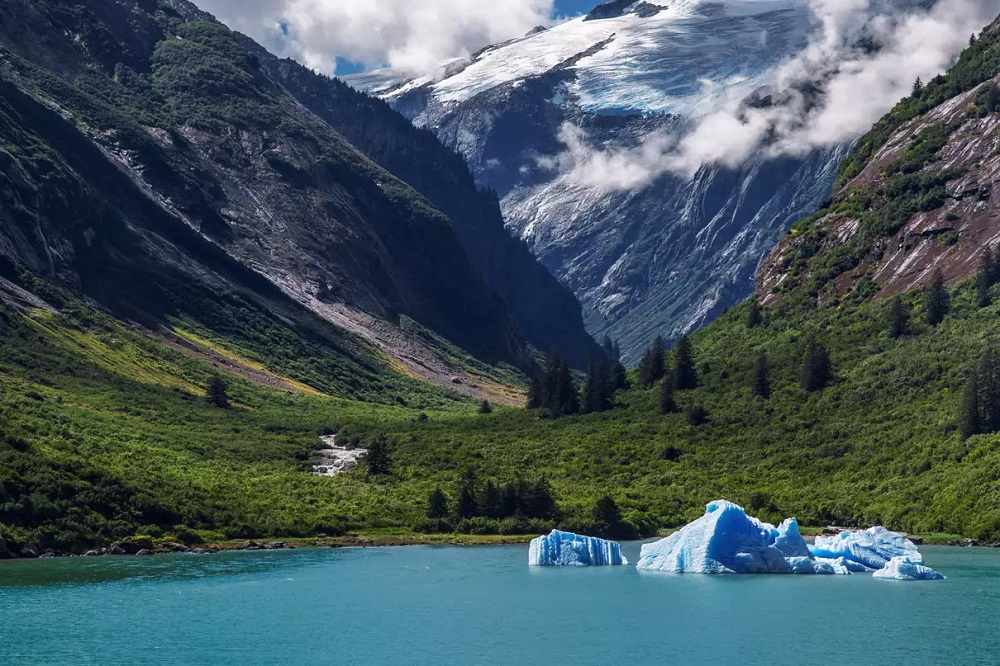 As both the largest national forest in the U.S. and the largest intact temperate rainforest on Earth, Tongass National Forest is home to an incredibly diverse array of rare plants and animals. The territory covers 16.7 million acres (roughly the size of West Virginia) in southeast Alaska, including the glacial Inside Passage. The land here has been home to Indigenous Alaskans for more than 10,000 years and is currently still inhabited by about 70,000 people in 32 communities. Salmon, bears, wolves, eagles, and whales are all common in the area. 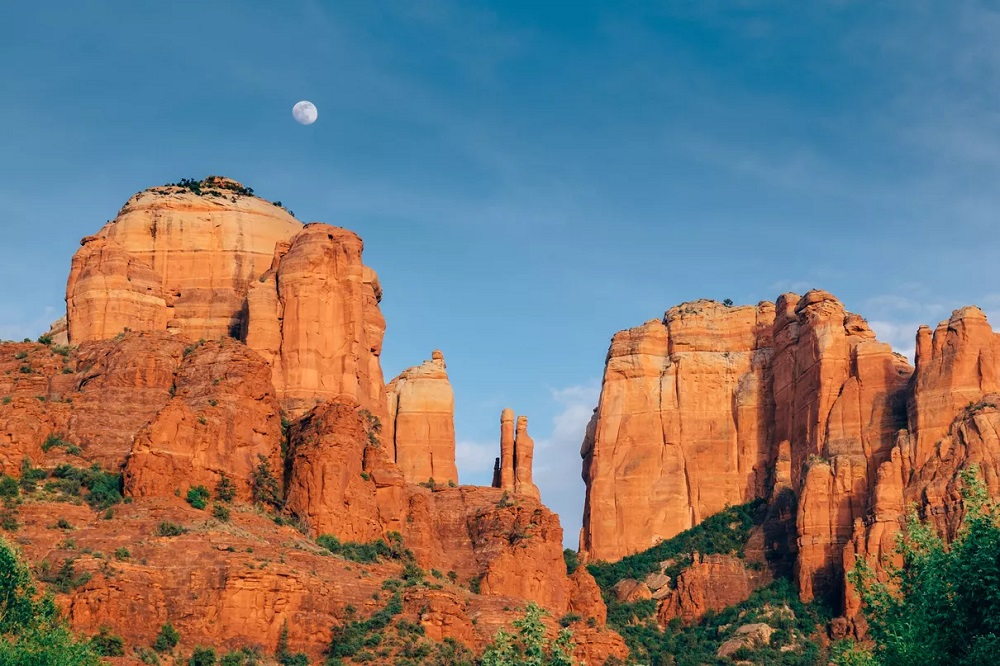 Ever wondered where early astronauts trained for the moon landing? The rocky landscape inside the 1.8-million acre Coconino National Forest in Arizona, specifically the cinder cones area, provided the perfect setting. But Coconino isn’t all red rocks and desert; there are also fragrant pine woodlands and even areas of heavy snowfall, which help make it one of the country’s most diverse national forests. Coconino also encompasses a vast majority of the San Francisco Peaks and is bordered by the Mogollon Rim, a 1,000-foot cliff running across central Arizona. 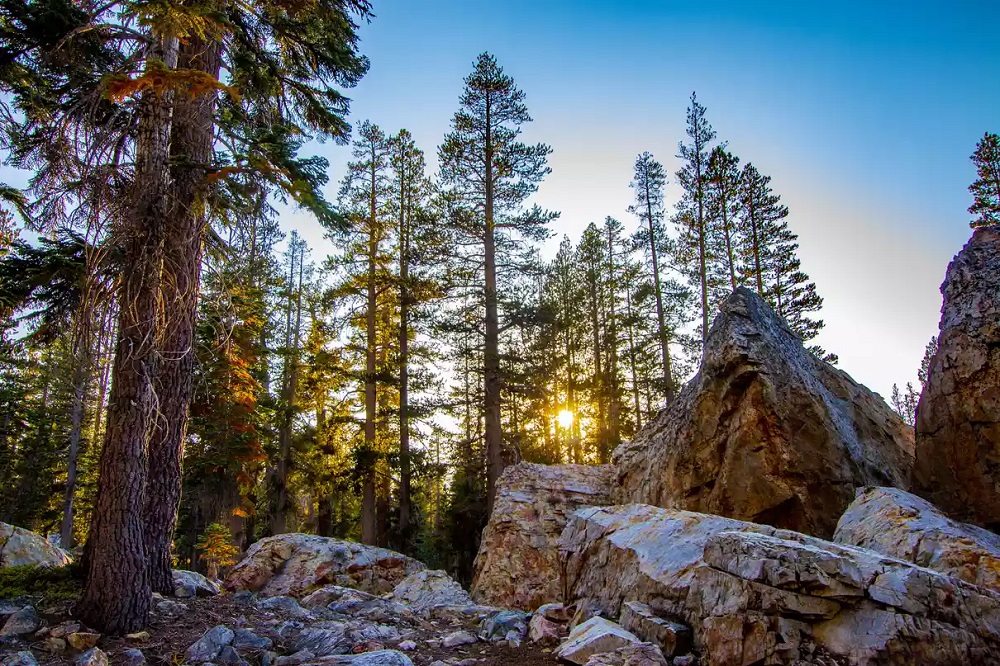 Bordered by the famed Yosemite National Park to the northwest and Kings Canyon National Park to the south, Sierra National Forest is known as one of California’s most popular natural recreational destinations. With over one thousand miles of trails for hiking, horseback riding, or backpacking — both well-maintained and rugged — outdoor enthusiasts have plenty of choices when it comes to exciting ground to cover.

Sierra National Forest faces challenges from the invasive western pine beetle, which contributed to the death of 8 million trees between 2011 and 2015.3 Although less serious, large numbers of pine trees were also killed by pine engraver beetles in 2015. 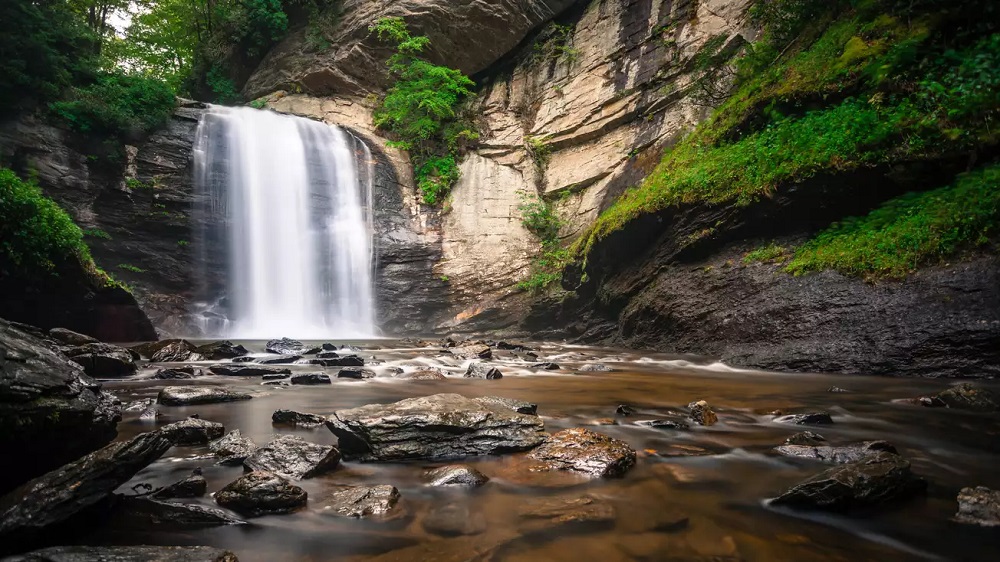 With over 500,000 acres of whitewater rivers and waterfalls, and hundreds of miles of trails, Pisgah National Forest is tucked in the Appalachian Mountains of western North Carolina. Home of the country’s first school of forestry, Pisgah was also the first land purchased under the Weeks Act of 1911, which authorized the federal government to acquire land as national forests in the eastern U.S.

Over the past 30 years, Pisgah has struggled with overtourism, as visitor numbers have increased faster than recreational sites can accommodate, causing degradation to forest infrastructure. As a result, the National Forest Foundation has integrated restoration efforts through its Investing in the Great Outdoors campaign. 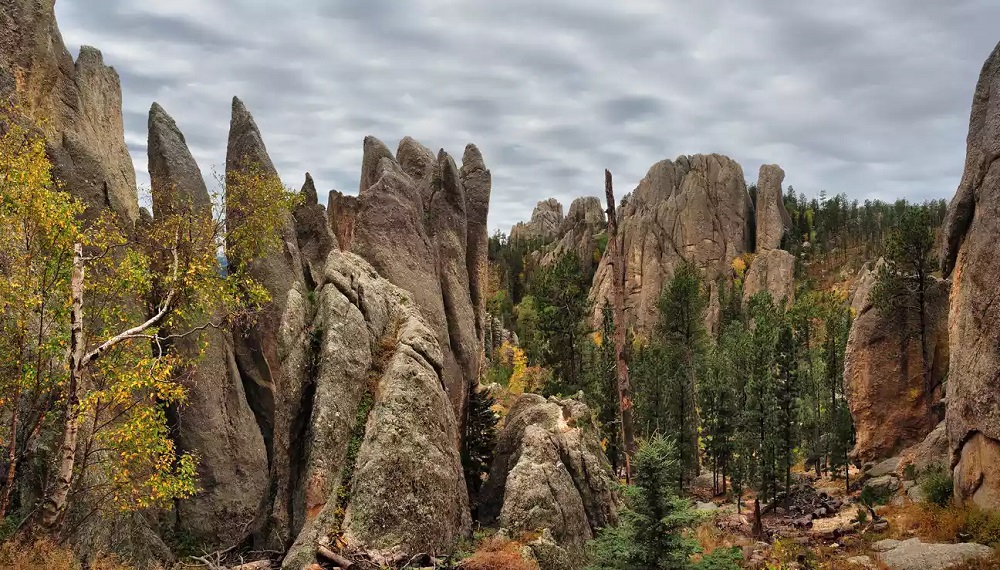 Black Hills National Forest has a patriotic claim to fame: it is home to Mount Rushmore, the massive granite sculpture carved with the likeness of U.S. presidents George Washington, Thomas Jefferson, Abraham Lincoln, and Theodore Roosevelt. Completed in 1941, the 60-foot faces attract massive flocks of visitors each year, though it isn’t the only feature that makes this park special. The national forest also encompasses 1.2 million acres of grasslands and pine forests waiting to be explored, as well as spaces for camping, hiking, mountain biking, rock climbing, and wildlife viewing. 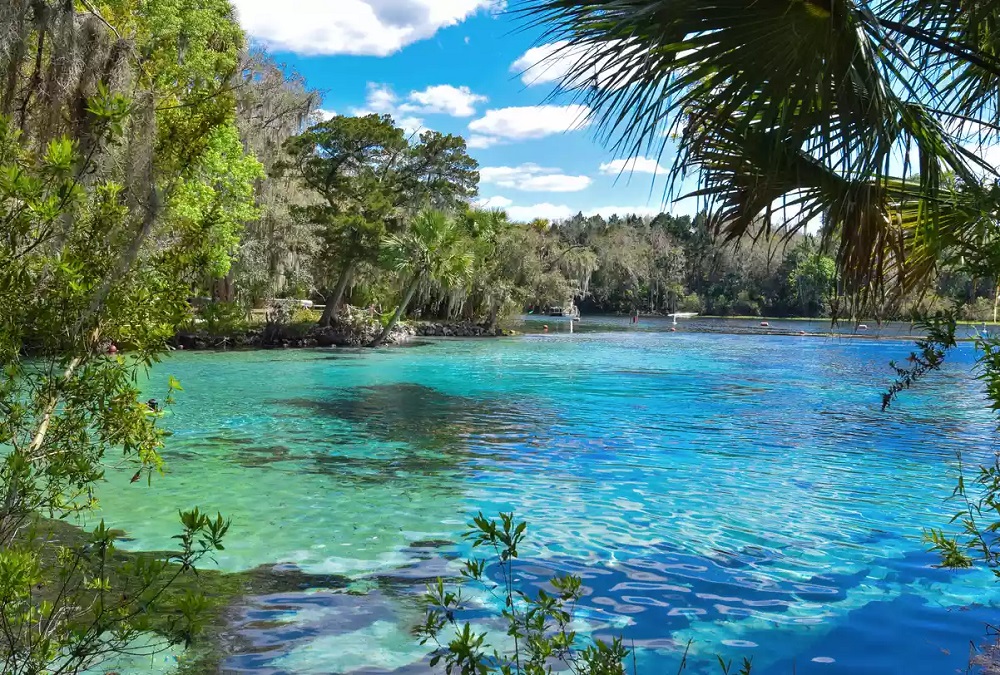 One of the country’s most unique national forests, Ocala is the southernmost forest in the United States. It’s located on 387,000 acres of land in north central Florida, between the Ocklawaha and the St. Johns rivers, and protects the world’s largest contiguous sand pine scrub forest. 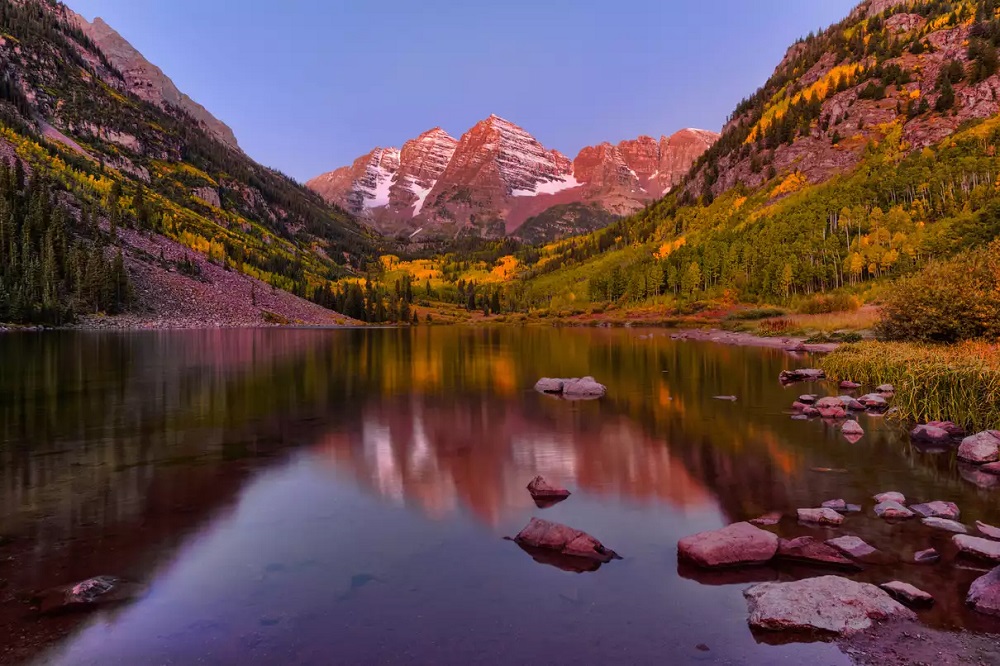 White River National Forest in northwest Colorado is the most visited national forest in the country (more than 100 million people each year) thanks to its 2.3 million acres, 12 ski resorts, 10 fourteeners (mountain peaks above 14,000 feet), and 25,000 miles of trails. Originally established in 1891 as a timber reserve, the biggest threats to this forest are wildfires and invasive insects. In the 1940s, a widespread outbreak of spruce beetles killed 99% of the overstory spruce population in an area of over 1,000 square miles.4 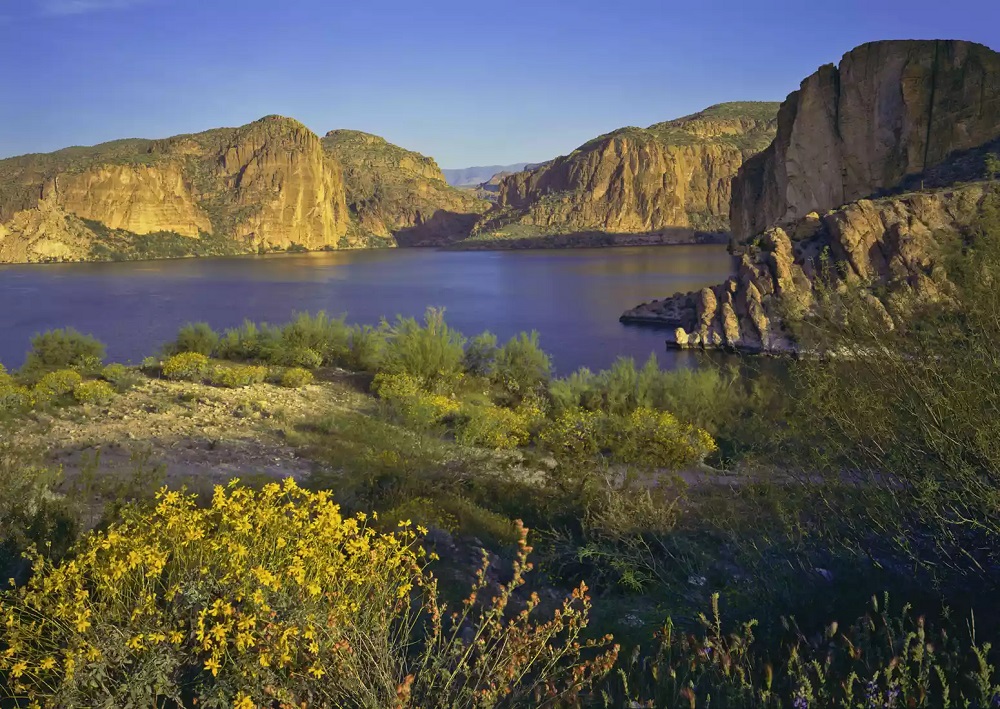 The largest of Arizona’s six national forests and the seventh largest in the country, Tonto National Forest stretches through 2.9 million acres near Phoenix. Landscapes range from beachy lakesides to stone canyons, and range in altitude from 1,300 to 7,900 feet, which helps attract 3 million visitors per year. A true reflection of the American national forest system, Tonto has six major reservoirs, houses 21 threatened and endangered species, grazes 26,000 head of cattle, harvests 4 million board feet of timber annually, and has a history of mineral mining going back 150 years. The fire season at Tonto is short but critical: the forest has averaged 330 wildfires each year for the last 10 years. 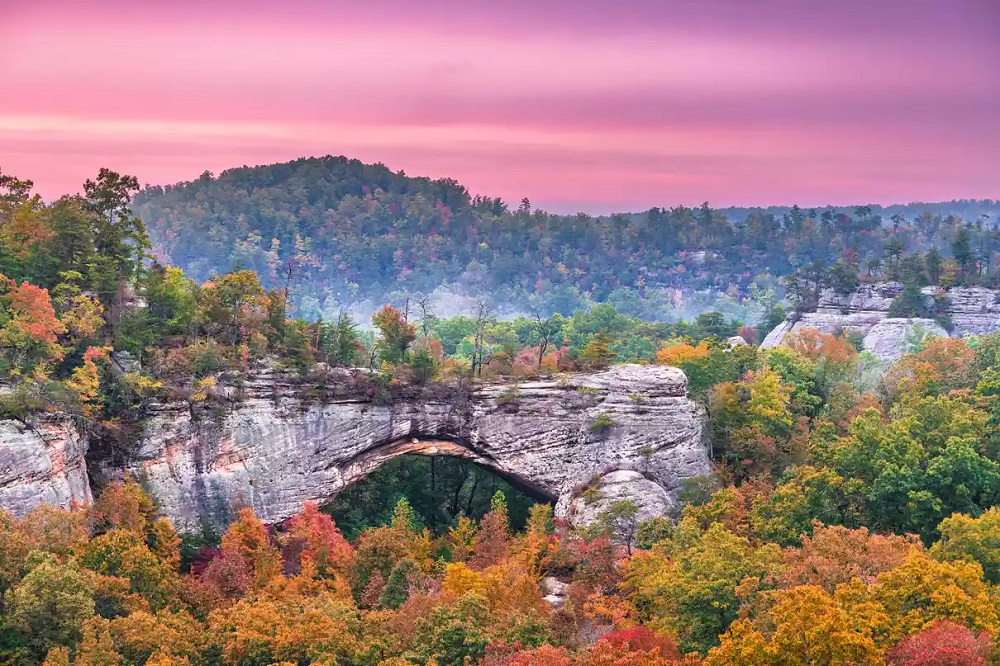 Originally known as Cumberland National Forest, this nature haven started out as a series of land purchases from coal and timber companies across 21 counties in Kentucky. Locals fiercely protested the name “Cumberland,” since it traced back to the Duke of Cumberland, who was instrumental in the downfall of the Jacobite Uprising in Scotland. This historic event resulted in many Scottish families fleeing to America, especially to states like Kentucky. President Lyndon B. Johnson took the protests to heart and changed the name to Daniel Boone National Forest in 1966, after the famous outdoorsman and Kentucky pioneer. 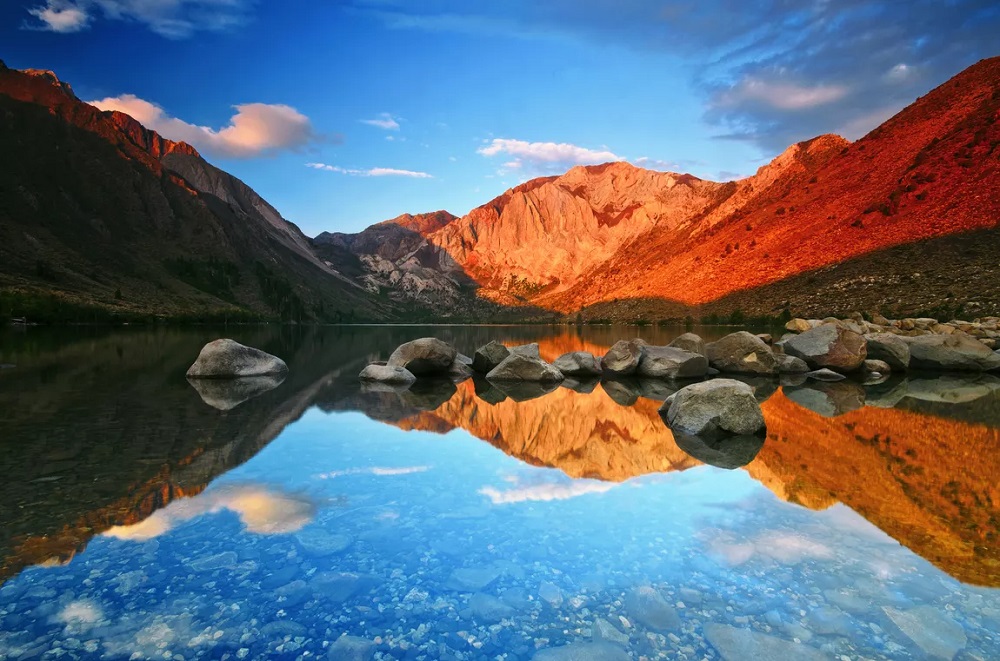 Inyo National Forest is known as an ideal spot for camping, hiking, fishing, skiing, and snowboarding aficionados, boasting 2 million acres near the borders of California and Nevada — including Mt. Whitney, the highest peak in the contiguous U.S. About half of its area is located inside nine different federal wilderness lands, with elevations reaching 4,000 feet in the Owens Valley region and up to 14,494 feet at Mt. Whitney. Another impressive feature of this forest is its Ancient Bristlecone Pine Forest, home to the oldest living trees in the world, some of which are almost 5,000 years old. 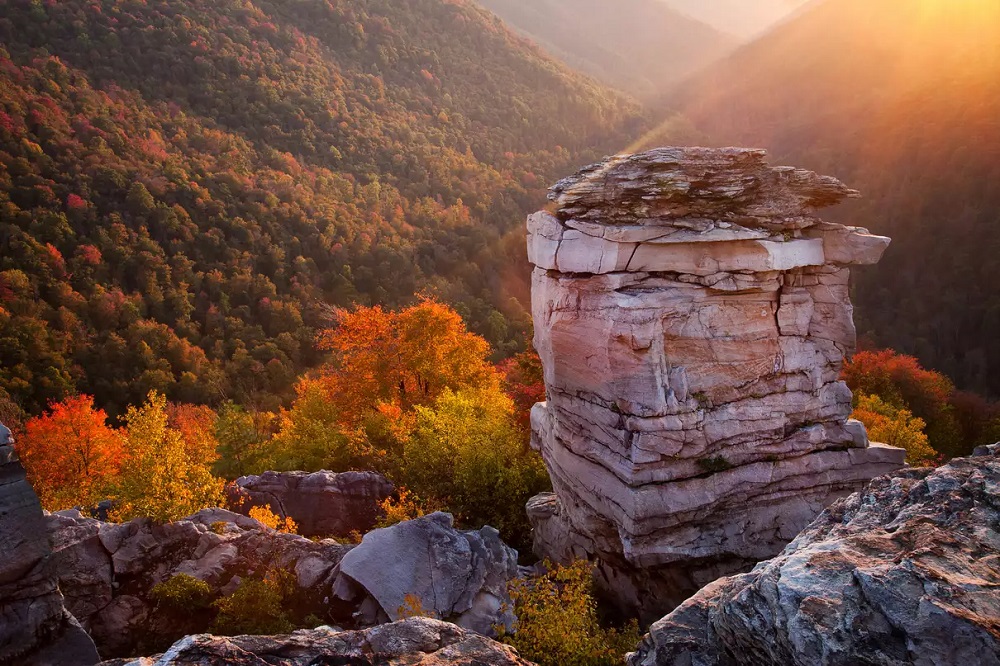 West Virginia’s Monongahela National Forest includes the state’s highest peak (known as Spruce Knob) and a vast section of the legendary Appalachian Mountains. The forest measured just 7,200 acres when it was acquired by the federal government in 1915 via the Monongahela Purchase, and was designated as an official national forest five years later. Today, the forest encompasses over 919,000 acres across 10 counties.