by Michael d’Estries: The actor and humanitarian details her new role as a UNESCO ‘godmother’ for the group Women for Bees… 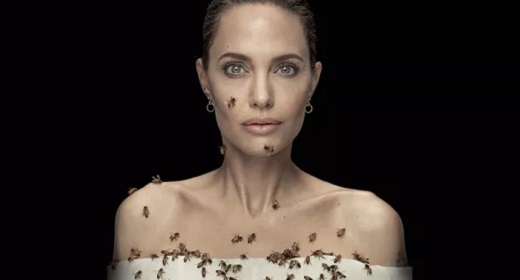 Leave it to National Geographic to match Angelina Jolie with a delicate, but powerful supporting cast of honeybees. The actor and humanitarian, in partnership with photographer Dan Winters, was determined to create an image for World Bee Day (May 20) that could both draw attention to the plight of native bees and efforts underway to help support them. In the end, they decided that including the very thing they were trying to protect would offer the most artistic impact.

And so, for a full 18 minutes, Jolie stood still as dozens of honeybees crawled all over her face, arms, and torso.

“She never once even flinched,” Winters told the magazine. “There was never a moment of like, ‘Ooh,’ or anything. It was like she’d just kind of done this her whole life and this was sort of this laissez-faire experience for her. And I was incredibly impressed by that. I was the only person on the crew that didn’t wear any protection. I kind of did it in solidarity.”

How did Winters pull this off without the use of special effects or injuring his famous subject? Test shots using bees and lemongrass oil, a natural attractant, didn’t produce the desired effect. So the photographer instead turned to history—tracking down the entomologist behind Richard Avedon’s 1985 “Beekeeper” and uncovering the secret behind that iconic photo. Now 87-years-old, the entomologist revealed it was a special pheromone that compelled the bees to stay calm, and, as luck would have it, he still had some of the original tucked away in a jar.

“It was so funny to be in hair and makeup and wiping yourself with pheromone,” Jolie said. “We couldn’t shower for three days before. Because they told me, ‘If you have all these different scents, shampoos and perfumes and things, the bee doesn’t know what you are.’”

While the photoshoot makes for powerful imagery, Jolie isn’t content to stop her involvement there. The 45-year-old, a special envoy for the UN Refugee Agency since 2012, is utilizing her vast humanitarian experience to support the new UNESCO organization “Women for Bees.” The five-year initiative will train more than 50 women beekeeper-entrepreneurs in 25 UNESCO-designated biosphere reserves around the world.

Jolie, a designated “Godmother” for the program, will both meet the participants and help track their progress as they work to create and maintain 2,500 native beehives by 2025. The goal is to not only help protect pollinators but also provide sustainable careers and launch a global network of knowledge for women beekeepers to tap into.

“I know it seems like I’m now working on bees, but really, to me, the bee and the pollination and the respect for the environment, it’s all interconnected to women’s livelihoods, [and to] displacement from climate change,” she told NatGeo.

In June, Jolie will join the first class of 10 women on an accelerated 30-day beekeeping training course at the French Observatory of Apidology in Provence. By the end of the session, the actress will proudly be able to add “beekeeper” to her long list of accomplishments.

“Women are so capable. And there are many women in areas that have not had opportunities. But they are hungry to learn, they have great business instincts,” she added. “To have a network, learning how to be the best beekeepers with all the latest science and methods, and having something they can make and sell. It’s not just about going around teaching women, it’s about learning from women all around the world who have different practices.”