by Jane Goodall: I so well remember when I visited Koko, at the invitation of Francine (Penny) Patterson (the woman who taught Koko a modified form of American Sign Language), for the first time… 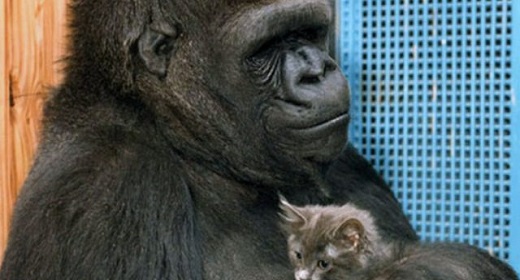 I don’t remember exactly when that was, but she already knew a great many words. She was not the first signing ape I met, for I was already familiar with Washo, the chimpanzee first taught sign language by the Gardeners, her tuition subsequently taken over by Roger Fouts (who also gave lessons to other signing chimpanzees, many of whom I met).

In my studies at Gombe of wild chimpanzees, I learned fascinating things about their nature and lives. Though we, humans, gorillas and chimpanzees, are all great apes, gorillas are very different from chimpanzees. As I sat watching during that first visit, Penny had a conversation in sign language with Koko, and I was impressed by the gorilla’s calm personality. She learned many signs throughout her life (some 1,000 we hear – and she also understood about 2000 spoken words). She used her signs in meaningful and sometimes innovate ways. And she answered a question for me, about which I had been arguing with some of my students working with Gombe’s wild chimpanzees. I always insisted that when they were observing a group of chimpanzees on the ground, resting or grooming, that the students should sit. “It cannot be nice for the chimps to have you towering over them” I said. Some of the students argued that clearly the chimps were so relaxed they could not care less. So I asked Penny to ask Koko if she preferred people to sit or stand when with her. And Koko was very definite in her reply, said Penny. She preferred people to lie down!!!!!

And the other story that I love about Koko is the one that proves, once and for all, that the apes have a sense of humour. I’ve seen it often with the chimps, but nothing as clear cut as Koko’s behaviour. She had just learned signs for all colours, not just primary, but purple and gold and beige and so on. This young woman is idly testing her skills, occupying Koko while waiting for her supper. The young woman picks up various items and Kiko correctly signs their colour. Until she is asked the colour of a white cloth. “Red” she signs. And she insists on red several times until she is told that if she doesn’t give the correct colour she won’t get apple juice for supper. At that dire threat, Koko reaches out, takes hold of the cloth, picks off a minute scrap of red fluff, and vigorously signs “red, red, red” whilst uttering loud grunts of gorilla laughing.

Koko became internationally well known and loved when she asked for a kitten for Christmas. She rejected the toy kitten she received, then chose a grey and white one from the litter. She named the kitten All Ball and was seldom separated from him until he was tragically killed by a car. After this, Koko showed signs of grieving for several months. Subsequently she looked after a succession of kittens, always treating them very gently. She exemplified the bonds that can develop between animals of different species, a subject in which I am particularly interested. (Once, at Gombe, a true friendship developed between a somewhat lonely chimpanzee infant, Gilka, and a baboon, Goblina, who would leave the troop to play with her friend when they were anywhere near each other.)

One other story I’ve learned about Koko is that she loved to paint for fun, though Michael, a gorilla she was raised with, took painting very seriously (Michael sadly died of heart failure in 2000).

Koko died peacefully in her sleep aged 46, thus living a little longer than gorillas typically live in the wild. (The oldest gorilla in a zoo was Colo from Columbus Zoo who died at 60 years old).

Koko, you taught us much about the gorilla intellect, and you were much loved. You will be missed.