Feel Free to Stop Striving: Learn to Relish Being an Amateur

by Xenia Hanusiak: The soundtrack of our lives is the sound of striving. Psychologists, philosophers and behavioural scientists are all 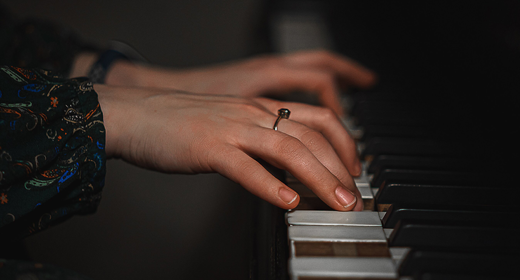 coaxing us to strive with variations of the same loop: strive for accomplishment, strive for prosperity, and strive for happiness. We must act fast and slow, or think big and small; be calm, be on edge, eat more, eat less, dance more and sleep more, want more – or less; practise for 10,000 hours or don’t practise at all; be deliberate, habitual, and intuitive, or just simply Zen out to zero.

Naturally, we all want to optimise our ways of being. But every once in a while, and for every one of our aspirations, there’s a contrarian voice screaming: Enough already! Can’t we stop succeeding for just one moment? Cease trying to be exceptional at something? The answer is yes, but to do so you must embrace your inner amateur.

I discovered my inner amateur and haven’t looked back since. It happened while listening to a recent recording of Études by the American minimalist composer Philip Glass, performed by his fellow American pianist Simone Dinnerstein. The performance was so inspirational that I leapt from the couch and found my fingers at the piano – searching for the same profundity of poeticism that spoke to me in the performance. When Glass set out to compose his 20 studies, he did so expressly to develop his own piano technique. Études are a form of composition written specifically to test a musician’s skillset. Glass was, in effect, custom-composing for his own inner amateur.

My musical upbringing involved constant striving across hours of laborious practice. Every morning, throughout my childhood, I diligently practised scales and études. Every week, I returned to my lesson anxiously awaiting the approval of the tick or the reprimand of the black cross. I don’t recall happiness, fulfilment or engagement. I just remember two states of mind: was I a success or was I a failure? If only my teacher (and I) had realised that I was an amateur. Then my life of striving might have stopped.

In the kingdom of music, the amateur who doesn’t know her place courts humiliation. Think of the opera aspirant Florence Foster Jenkins, the quirky American soprano and socialite, vividly portrayed by Meryl Streep in Stephen Frears’s 2016 biopic. In 1944, at the age of 76, the tone-deaf dilettante booked Carnegie Hall in New York, where she performed the grandest arias of the repertoire – arias that only the most seasoned singers would dare – and earned the disastrous reviews you might expect. She died a month later, following a sudden illness, but she died having fulfilled the aspirations of her inner amateur. Those aspirations might have exceeded her talent, but the metrics of success is hardly the point. For anyone who witnessed Streep’s beaming smile in Frears’s film, the message is clear: Foster Jenkins experienced far more personal pleasure than public pain. However, the idea of the amateur as an artistic and social liability is a fairly contemporary one.

The role of practice ought to be revised so that striving is replaced by fulfilment, and notions of success and failure are erased

The word ‘amateur’ didn’t establish itself in the English language until the 18th century, even if the distinction between the so-called dilettante and the professional is ancient. Plato’s discussion of musical education in Book III of The Republic implies the existence of amateurs as well of professionals. For Aristotle, skill in performance is to be carried to the point at which it enables the pupil to enjoy good music – and no further. If only these ancient wisdoms had been passed on to Foster Jenkins.

The amateur has always had a rightful place in society. In his 1779 sonata, C P E Bachdedicated his work ‘für Kenner und Liebhaber’, or to connoisseurs and lovers, expressly excluding professionals. In the Victorian era, playing the piano was viewed as a particular accomplishment for women, that is, as a ‘home art’ that might advance their marriage prospects. When the concept of the amateur was first referenced in English in the Universal Dictionary of Arts, Sciences and Literature(1803), the amateur was defined as ‘a foreign term introduced as a now passing current amongst us, to denote a person understanding and loving or practising the polite arts of sculpture, or architecture, without any regard to pecuniary advantage.’

More than a century later, the French theorist and philosopher Roland Barthes argued on similar lines, that:

The Amateur engages in painting, music, sport, science, without the spirit of mastery or competition … he establishes himself graciously (for nothing) in the signifier: in the immediately definitive substance of music, of painting …

But Barthes, did more than valorise the vocation. He personified the role. From his interviews, published posthumously in The Grain of the Voice (1981), we know that, as a student, Barthes practised J S Bach’s The Well-Tempered Clavier (1722-42) daily to assist him in his recuperation from tuberculosis. We also know from his autobiography Roland Barthes by Roland Barthes (1975) that, as part of his daily ritual, he would record his piano practice to assist his memory. His repertoire was restricted, yet under ‘likes’ in the inventory of ‘likes/dislikes’ that Barthes logged, he listed Handel, the Canadian pianist Glenn Gould, the piano, and all Romantic music, alongside too-cold beer and the Marx Brothers. If Barthes can lead us to a new appreciation of the amateur, then the role of practice ought to be similarly revised so that striving is replaced by fulfilment, and notions of success and failure are erased.

The art of amateurship pivots on us knowing our capabilities and realising the boundaries of what we seek. Once we remove goal-seeking from the amateur’s aspirations, we can focus on the psychology of optimal experience articulated by the psychologist Mihaly Csikszentmihalyi’s theory of flow, which the journalist Ariel Gore links to happiness:

When we strike a balance between the challenge of an activity and our skill at performing it, when the rhythm of the work itself feels in sync with our pulse, when we know that what we’re doing matters, we can get totally absorbed in our task. That is happiness.

In not aiming to perform a four-part fugue by memory, or looking to debut at Carnegie Hall à la Foster Jenkins, the amateur finds fulfilment by being completely absorbed in the music at hand, and undergoing an immersion journey that, at its best, can act as a metaphor for understanding the preciousness of time and the need for deliberate concentration.

Practising heightens my awareness of being alone with myself … Suddenly, I find that I’m not alone at all. The piano becomes my significant other

Our daily lives already overemphasise competition, ambition and deadlines. We don’t need to reproduce such pressures in our pleasure lives. The joy of amateurship allows you to find beauty in simplicity, setting smaller goals and searching for the aesthetics; allowing you to discover the wonder of tactility, the action and release of the key, and the lyricism of the piano’s sound. If we focus on our proactive enjoyment of conquering (and luxuriating) in a few bars at time or playing a piece of music that truly connects us with our spirit, we enter into dialogue with pleasure. As Daniel Levitin writes in The Organized Mind (2014):

During the flow state, attention is focused on a limited perceptual field, and that field receives your full concentration and complete investment. Action and awareness merge.

So, despite not conquering a Chopin waltz, the sense of fulfilment prevails.

Taking ownership of your inner amateur doesn’t mean sacrificing your inner aspirations to play a challenging piece of music. It simply means that you become the custodian and narrator of your own experience of striving.

For so many amateur musicians, the pattern of criticism and the hierarchical relationship of the teacher-pupil relationship can be crushing. The student becomes disengaged from music but more importantly from themselves. I’m reminded here of Joni Mitchell’s experience of piano lessons. In a New York Times article, Lindsay Zoladz recalls Mitchell saying: ‘I played … for my piano teacher, who slapped me across the wrist with a ruler for playing by ear … she said: “Why would you play by ear when you have the masters under your fingers?”’ The young Mitchell (then Joan Anderson) replies: ‘Well, the masters had to play by ear to come up with that stuff.’ That was her last piano lesson.

I’ve come to realise that the time I spend practising the piano is perhaps the only private moment I might have on any given day. Practising heightens my awareness of being alone with myself, and the sense that I’m controlling the experience. I can then be engaged and enlivened by the encounter, relinquishing a sense of passivity for one of self-engagement. Suddenly, I find that I’m not alone at all. The piano becomes my significant other.

Practising invites a kind of intimacy, a moment of mindfulness that we can cut and paste into our daily routines. Once we appreciate that practice is not an endgame, our ego falls away and we enter the experience with complete commitment. Csikszentmihalyi talks about this state as an autotelic experience, the word deriving from the Greek autos, meaning self, and telos meaning goal. Our inner amateur is therefore self-directed. As Aristotle reminds us, amateur musicians define their own goals and their own enjoyment.

Perhaps it’s time to revise the mantra ‘practice makes perfect’, which has been revived in recent years by Malcolm Gladwell. In The Outliers: The Story of Success(2008), Gladwell argued that, in almost any given area, expertise could be guaranteed by 10,000 hours of practice. But what if we turn our conditioning upside down in line with the precepts of amateurship, and begin to practise with expressions of fearlessness, spontaneity, commitment and aliveness? This doesn’t mean that we forgo our scales and our repetitions. It simply entails that we practise without the anxiety of quantifying our results. This analogue moment is a communion with your lyrical self.

But my experience with the piano might not be yours. Your moment could be in baking, weaving, painting or doodling. In each case, it’s about appreciating a feeling of the mesmeric, and honouring the aesthetic experience: the paintbrush against the grain of the paper, or the gentle rhythm of kneading dough. Chances are that the mindfulness and consciousness that you bring to the moment will increase your accomplishments a thousand-fold. The destructive emotions of success and failure will slip away, and the word ‘practice’ will be replaced by the word ‘pleasure’.

Since I rekindled my new relationship with my piano and tapped into my inner amateur, I discovered a quiet room of my own. My piano became silent witness. Perhaps – if I think of the mute heroine Ada in Jane Campion’s film The Piano (1993) and the determination and salvation that the piano offered her – it even became my voice.

Xenia Hanusiakis a cultural commentator, essayist and writer whose work has been published by the Financial Times, Music & Literature and The New York Times, among others. As an operatic soprano, writer for the stage and curator, she has contributed to festivals from National Sawdust and BAM in New York to the Beijing Music Festival.