The 12 Tallest Mountains In The United States

by Katherine Gallagher: The tallest mountain in the United States is Denali, formerly known as Mount McKinley, located near the center of the Alaska Range… 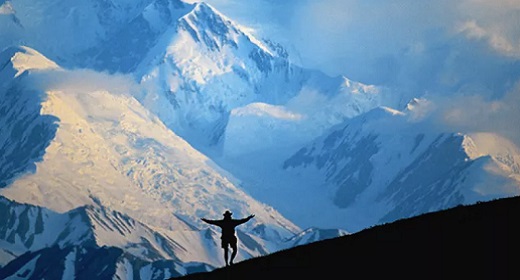 In fact, most of the United States’ tallest mountains are located in Alaska and are appropriately characterized by icy summits and glacial surroundings. That’s not to say that other mountain ranges in the U.S. don’t have some worthy peaks. Though maybe not as impressive as Denali’s 20,210 feet, the highest mountain in the lower 48 states, Mount Whitney in California, stands at 14,505 feet.

Explore our list of the 12 tallest mountains in the country, what makes each one unique, and some of the valuable natural resources they hold. 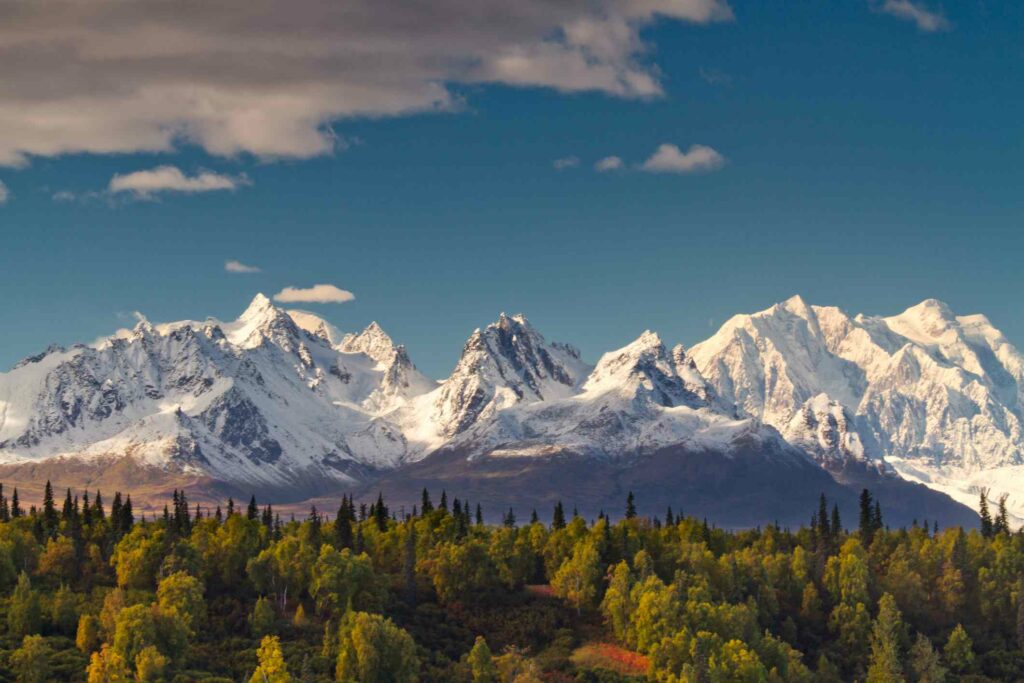 Just as the mountain has gone by different names throughout the years (it was known as Mount McKinley before 2015), Denali has also seen various measurements since the late 1800s. To set the record straight, an advanced survey expedition team set out in 2015 with the latest GPS equipment and geoid models, determining a new height of 20,310 feet, which has become the most widely accepted measurement today.1

Denali is located inside the Denali Biosphere Reserve and National Park in south-central Alaska, within the northern boreal forest biome known for housing at least 39 mammals, including grizzly bears, gray wolves, and moose. According to the National Parks mountaineering summaries, 732 climbers from the United States and 494 climbers from international countries received permits to climb Denali in 2019. 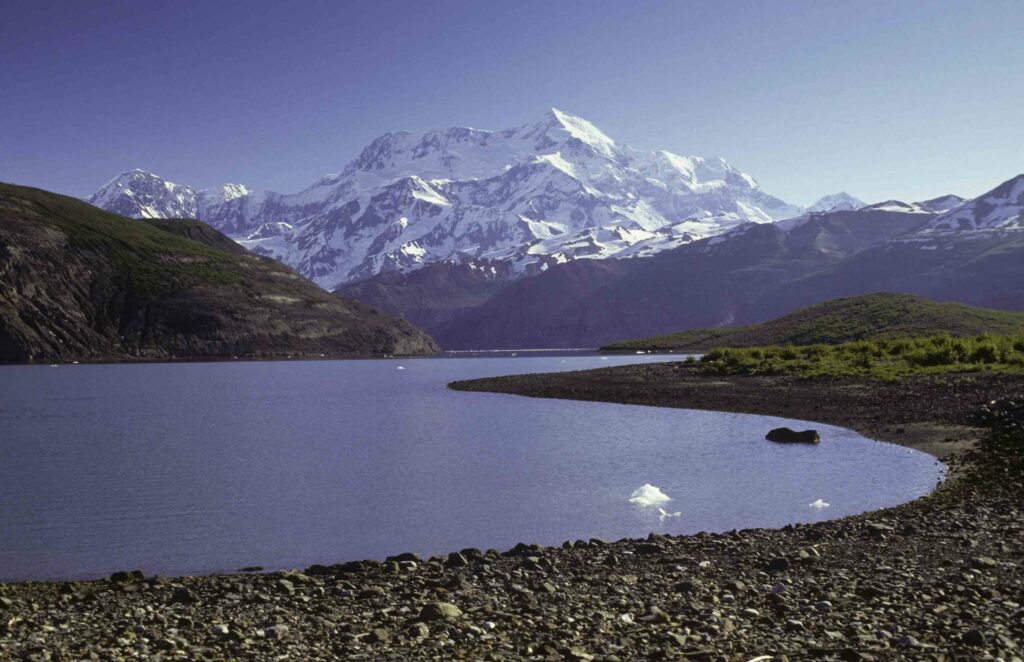 The first ascent at Mount Saint Elias was completed all the way back in 1897 by a team led by the Duke of Abruzzi, but these days the mountain is mostly used for skiing, as it has one of the longest ski runs in the world. 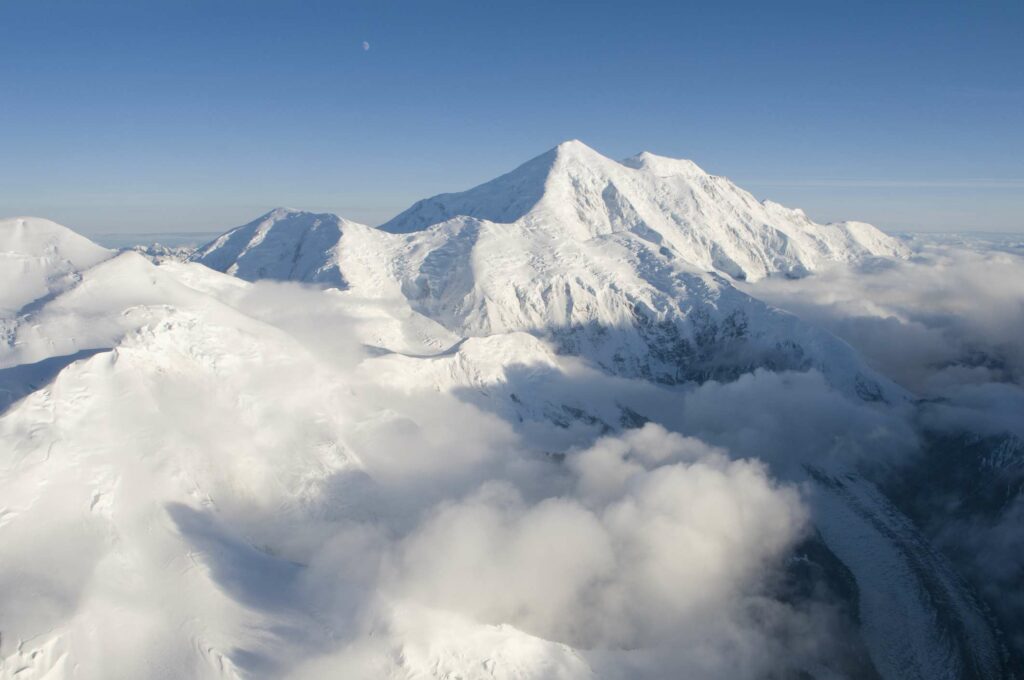 Located in the central Alaska Range, the 17,400-foot Mount Foraker is the third-highest peak in the United States. It was first climbed in August of 1934 and received its name from former United States lieutenant and U.S. senator from Ohio, Joseph B Foraker.

This peak sees far fewer climbers than its neighbor, Denali—since the pass to climb both is included within one permit, most mountaineers opt for the more famous of the two. In 2019, for example, there were just four women who attempted to climb Foraker.

Mount Foraker is also protected by Denali National Park and Preserve, where it provides important habitat for the region’s wildlife and plants. 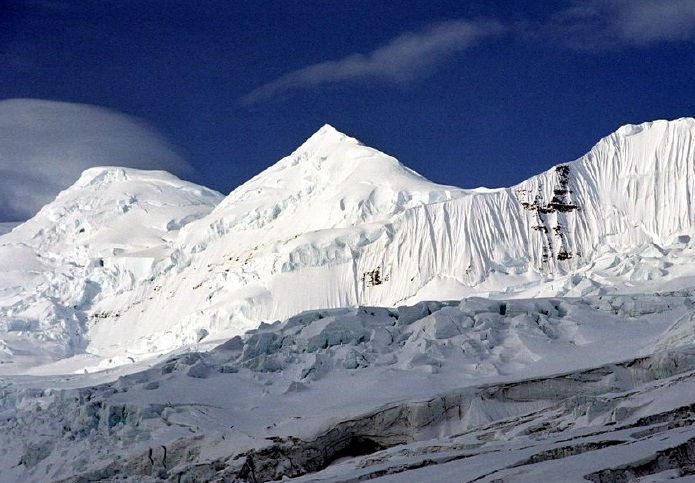 Mount Bona in eastern Alaska stretches 16,421 feet and is part of the Saint Elias Mountains. The stratovolcano is believed to have had its last volcanic eruption in 847 AD and is now home to a vast expanse of glaciers and icefields. In fact, the state’s oldest glacier ever recorded was recovered from a basin between Mount Bona and Mount Churchill, dated to be about 30,000 years old.

The mountain also provides an important source of ice for both the Klutlan Glacier, which flows into Canada’s Yukon Territory, and the nearby Russell Glacier system. Since it is almost completely covered in ice, climbers on Mount Bona are rare. 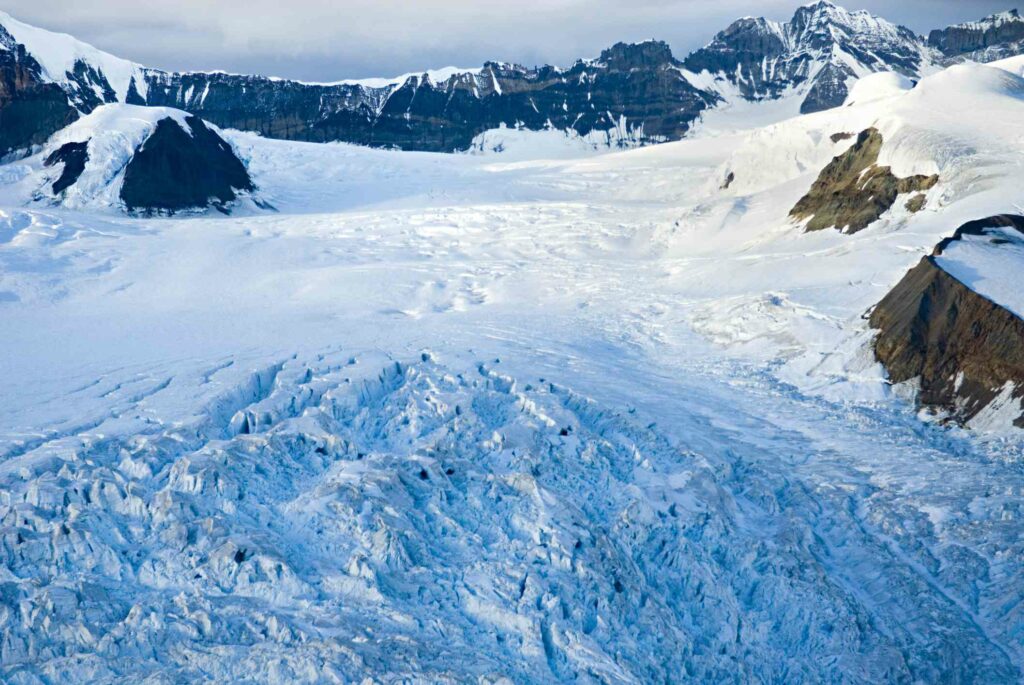 Also located within Wrangell–St. Elias National Park in Alaska, Mount Blackburn is the 16,390-foot fifth-highest peak in the United States and the highest peak in Alaska’s Wrangell Mountains.

In 1912, George Handy and Dora Keen summited its eastern side, completing the historic climb without guides. The eastern peak of the mountain didn’t see another climber until almost 70 years later, when Gerry Roach made a second ascent in 1977.

Since the mountain is so close to the Gulf of Alaska, it experiences some of the worst weather in North America; a combination of frequent storms, inaccessibility, and its remote location has resulted in less than 50 summit attempts over the last 30 years. 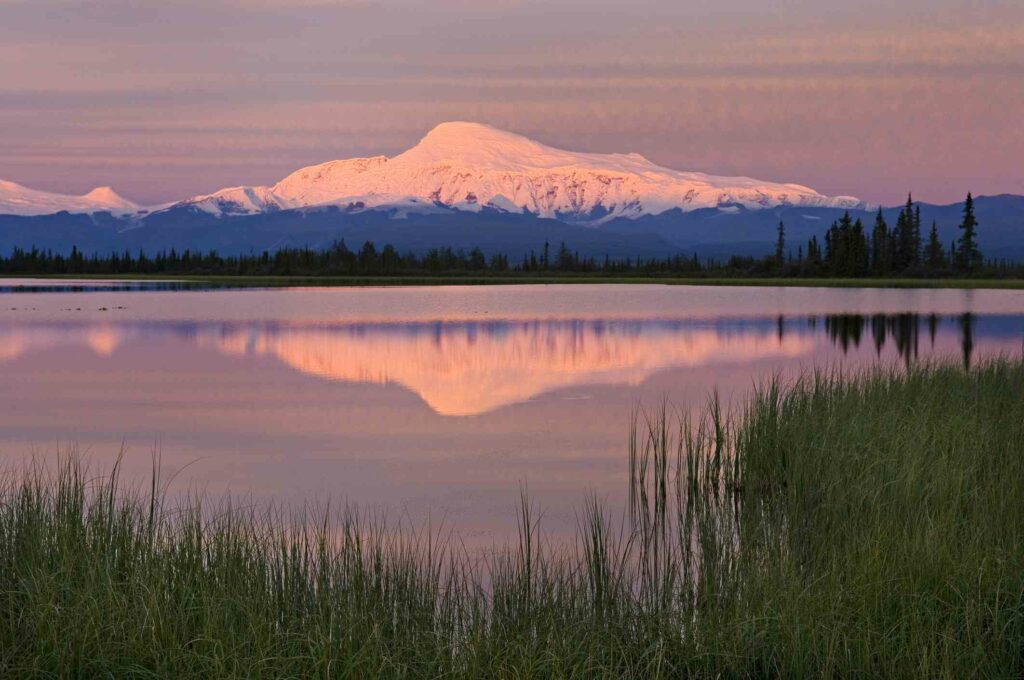 Apart from being the sixth highest mountain in the United States, the Mount Sanford shield volcano is also one of the country’s highest Quaternary volcanoes. Its last known eruption was during the Pleistocene period, which lasted from 2.6 million to 11,700 years ago. Its elevation is 16,270 feet, and its summit is completely covered in ice, so it is little studied and rarely climbed. Several large-magnitude eruptions over the past 2,000 years in the region covered the area with volcanic ash, famously known as the White River Ash. 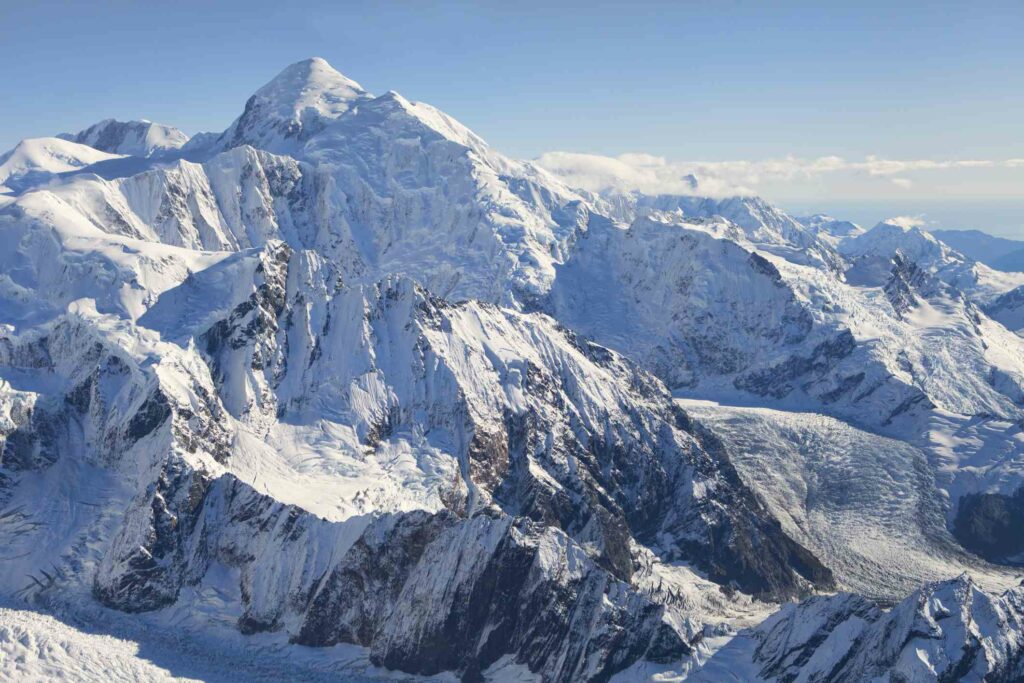 The 15,325-foot Mount Fairweather in Glacier Bay National Park and Preserve Alaska was named by British navigator Captain Cook in 1778 for the good weather encountered at the time of his visit. Its first successful climb occurred in 1931 and it wasn’t summited again until 27 years later. Since that second climb, there have been only 43 successful summits, the last of which happened in 2011.

Thanks to its location just above Glacier Bay, Mount Fairweather can be seen from hundreds of miles away on clear days, but it is more often obscured due to the cloud cover and notoriously stormy weather on the mountain (despite its name). 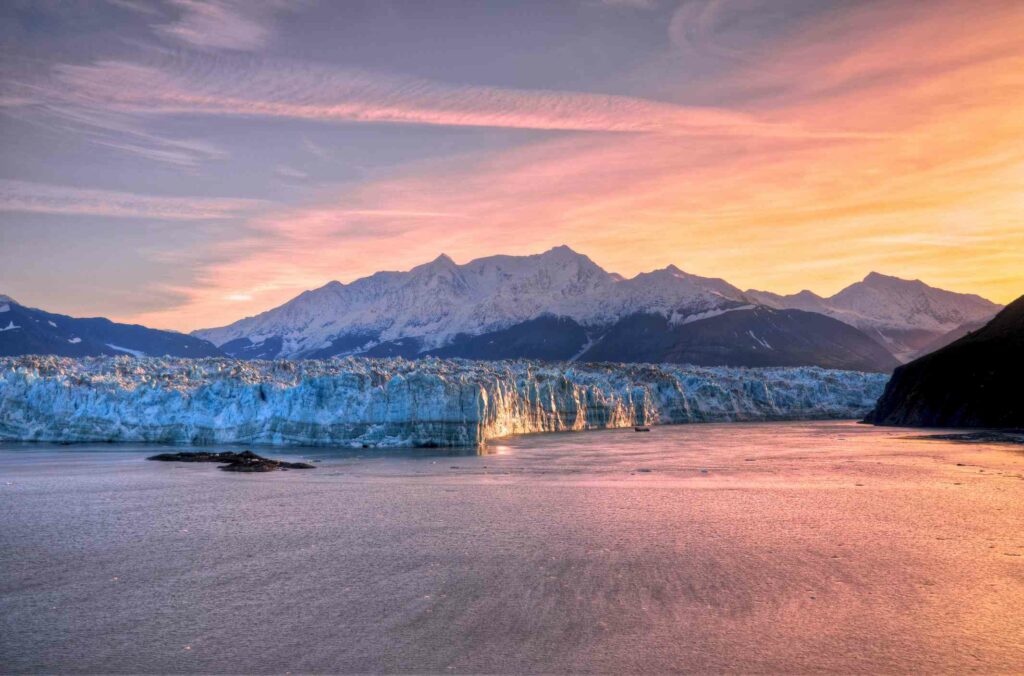 Mount Hubbard is found on the Alaska/Yukon border, so the Canadian side is located within Kluane National Park and Reserve while the United States side is inside Wrangell–St. Elias National Park. The 14,951-foot mountain was named after Gardiner Greene Hubbard (the first president of the National Geographic Society) by United States Geological Survey geologist Israel Russell in 1890; National Geographic had co-sponsored Russell’s expeditions, so the naming was in honor of the organization.

The mountain is separated from Mount Vancouver by the Hubbard Glacier, which is the largest tidewater glacier in North America at 76 miles long, 7 miles wide, and 600 feet tall. 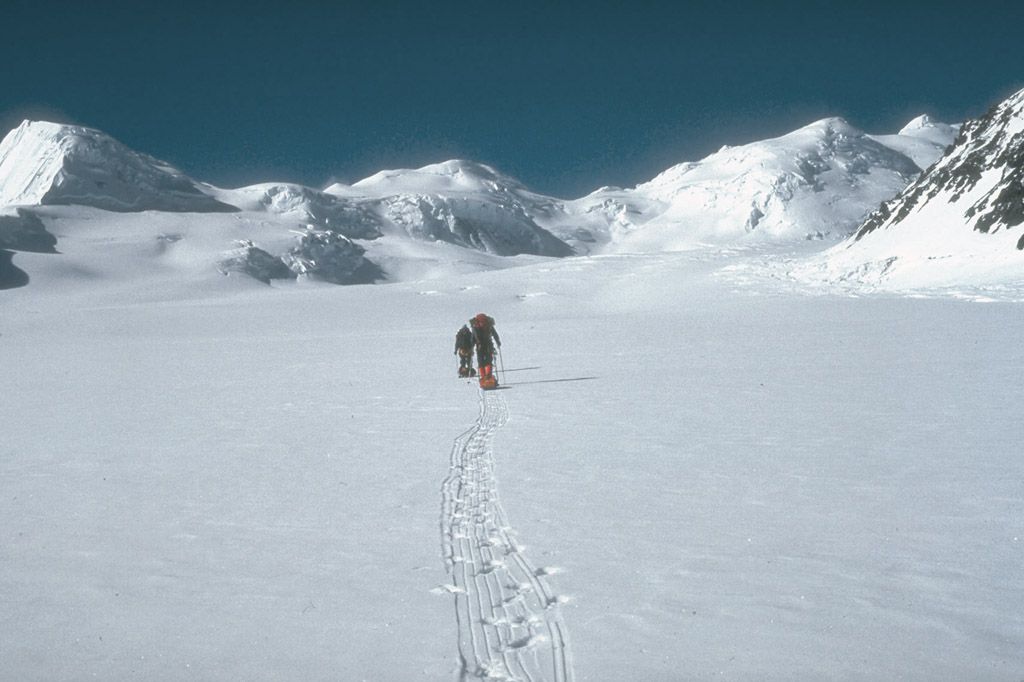 Mount Bear is located just four miles west of the Alaska-Canada border. It’s at least 14,831 feet in elevation, while its icy plateaus contribute to both the Barnard Glacier and the Klutlan Glacier complexes.

Due to its technical difficulty and remoteness, combined with its proximity to more popular mountains like Mount Logan and Mount Lucania to the east, Mount Bear is rarely climbed. It is protected by the preserve and UNESCO World Heritage Site, Wrangell-Saint Elias National Park. A drop from the summit of Mount Bear to the Barnard Glacier is a whopping 10,000 feet down over 12 miles. 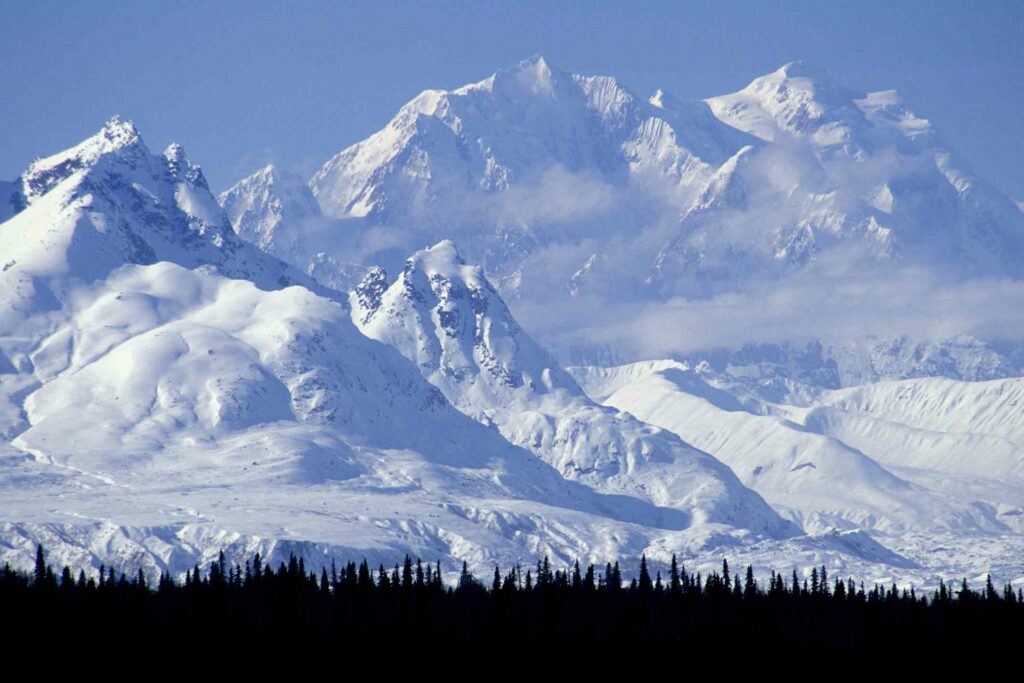 14,573-foot Mount Hunter is often considered the steepest and most technical of the three main peaks in Denali National Park and Preserve, rising about 7,000 feet above Alaska’s Kahiltna Glacier. With such a rugged reputation, very few people have attempted the climb since the mountain was first summited in 1954 by Fred Beckey and Henry Mehbohm (who wrote the book “Seven Years in Tibet”). The accomplishment is still considered one of the boldest climbs ever completed in the Alaska Range, especially since both mountaineers had been part of the first Northwest Buttress expedition of Denali earlier that same year. 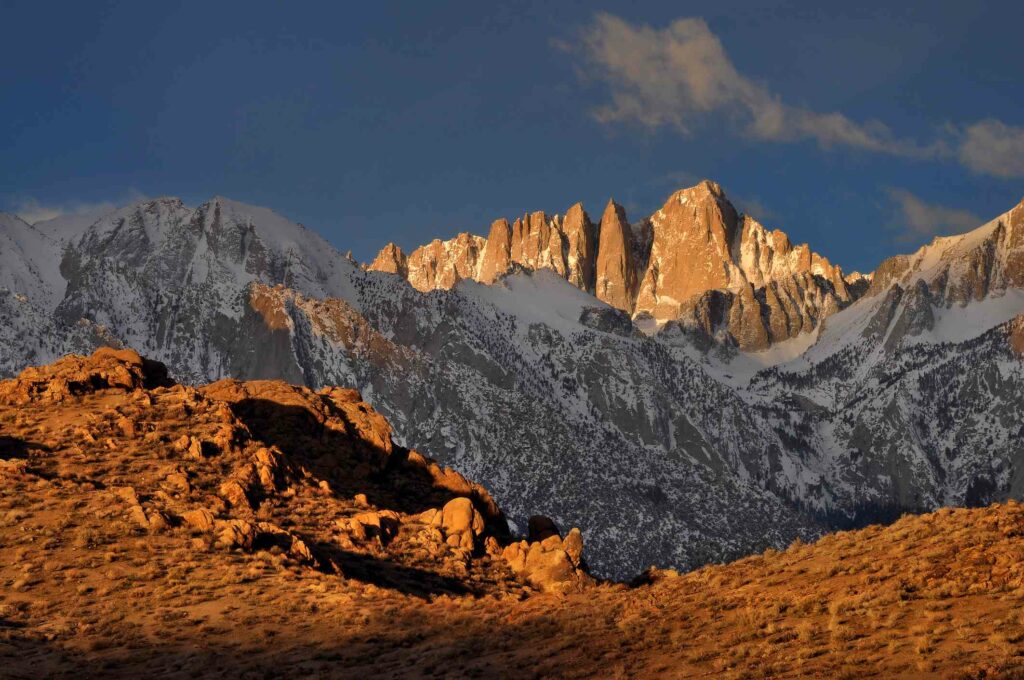 Known for being the tallest mountain in the lower 48 states (seconded by Mount Elbert, the tallest mountain in Colorado), Mount Whitney is found in California’s Sierra Nevada mountains along the border of Sequoia National Park and the famous John Muir Trail. Accessing the 14,505-foot summit is only possible for climbers through a special permit, and the U.S. Forest Service only reserves permits by lottery or six months in advance.

Since its summit is above the treeline, climbing over 6,000 feet in 11 miles, Mount Whitney has an alpine climate and ecology with very few plants (one example is the low-growing sky pilot cushion plant) and transient animals like butterflies and some species of bird.

According to the National Parks Service, about 19,000 people attempt to climb the east side of the tallest mountain in California each year, while just 4,000 attempt the west side. 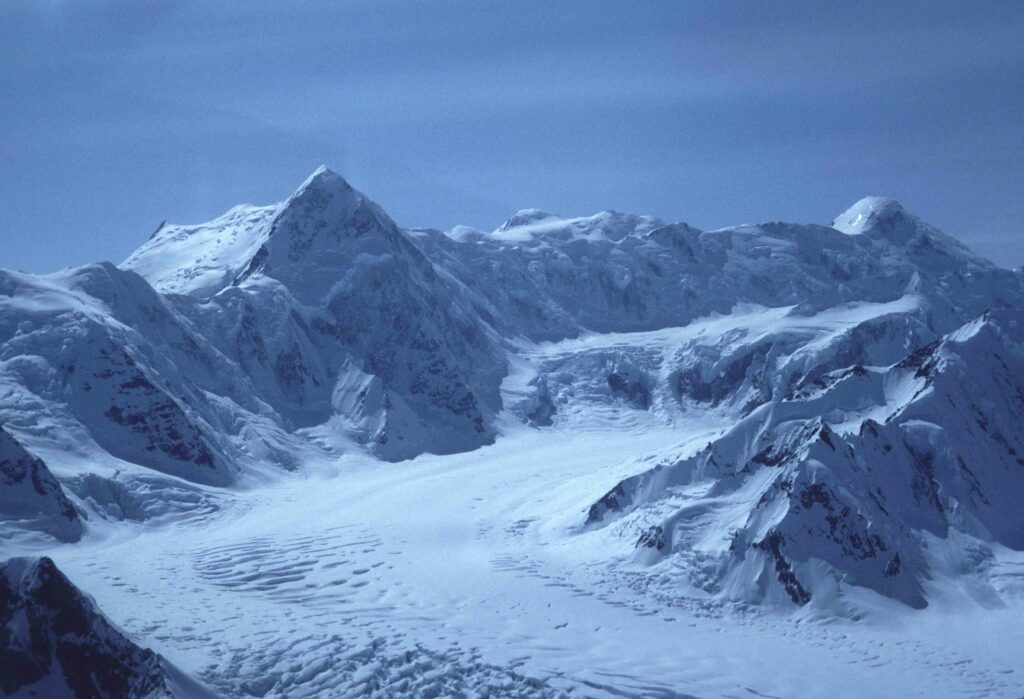 Also located within the Saint Elias Mountains on the border of Alaska and Yukon, 14,500-foot Mount Alverstone shares a large massif with Mount Hubbard to the south and Mount Kennedy to the east. Also known as Boundary Peak, the mountain was named after Chief Justice of England Lord Richard Everard Webster Alverstone, known for his historic deciding vote against Canada in the Alaska boundary dispute in 1903.

It was climbed for the first time back in 1951 by a team led by Walter Wood, who also ascended Mount Hubbard during the same expedition. Mount Foresta, a smaller mountain near Mount Alverstone, is named for Wood’s daughter who tragically died in a plane crash while he was summiting the mountain.