The Shocking Numbers Behind The Lake Mead Drought Crisis 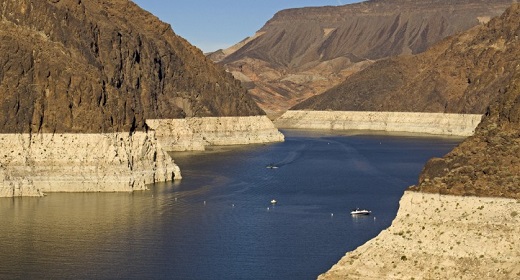 Plagued by extreme, climate change-fueled drought and increasing demand for water, Lake Mead on Wednesday registered its lowest level on record since the reservoir was filled in the 1930s.

Lake Mead, a Colorado River reservoir just east of Las Vegas on the Nevada-Arizona border, is poised to become the focal point of one of the country’s most significant climate crises: water shortages in the West. Millions of people will be affected in the coming years and decades by the Colorado River shortage alone, researchers say, with some being forced to make painful water cuts.
It’s not a threat on the horizon; new projections show the first-ever water shortage along the Colorado River is all but certain to be declared later this year.
“Even without climate change, we would have a problem because we’re taking more water out than the river could provide,” John Fleck, director of the Water Resources Program at the University of New Mexico, told CNN. “But climate change has made the problem much worse by substantially reducing the flow in the river.”

Lake Mead is around 143 feet below ‘full,’ a deficit roughly the height of the Statue of Liberty

The water in Lake Mead on Wednesday reached a new low — 1070.6 feet above sea level — since it was filled in the 1930’s, according to data provided by the US Bureau of Reclamation. More precisely, every day for the past eight days has been a record as rapid evaporation and human use siphon water from the reservoir.
The lake has fallen around 143 feet below its 2000 level, when it was last considered full. What’s left is a “bathtub ring” of white minerals as tall as Lady Liberty along the lake’s steep shoreline.
As water drains from Lake Mead, a “bathtub ring” of minerals is left on the shore, showing its decline. The height of the ring in June was roughly the size of the Statue of Liberty without its base.
About a century ago, representatives from seven U.S. states — Nevada, California, Arizona, Utah, Wyoming, Colorado, and New Mexico — struck a deal to divvy up the Colorado River. Hydrologists warned that officials were promising more water than the river could give, according to Fleck. But in an era driven by power and politics, their warnings were largely ignored and plans moved forward.

That’s more than the population of Florida.
Snaking its way through the Rocky Mountains to the Gulf of California, the flows of the Colorado River are dwindling due to climate change-driven heat and drought.
Among the hardest hit in the first round of water cuts will be agricultural communities, particularly those in central Arizona. With less water, farmers say they will be forced to fallow land. 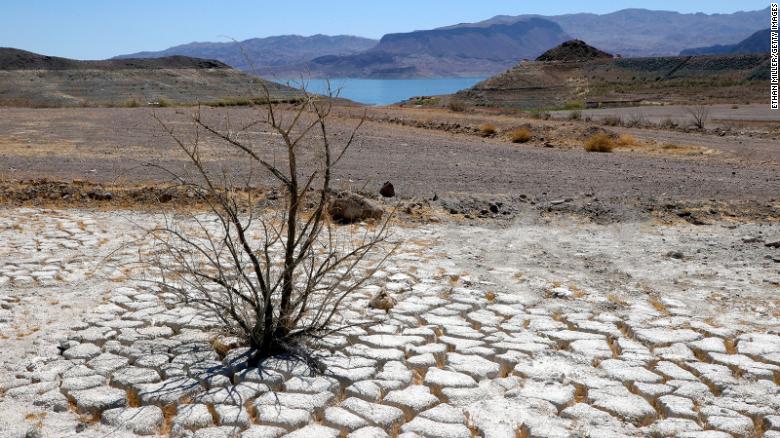 This area of dry, cracked earth used to be underwater near where the marina was once located in the Lake Mead National Recreation Area.
Native American communities are also impacted, Fleck said: “A number of tribal communities across the Colorado River Basin have been promised some water that they don’t have yet.”

The last time Lake Mead was considered full was 2000

Twenty one years ago Lake Mead peaked at an elevation of 1,214 feet. The highest recorded level was in 1983 when it was 1,225 feet above sea level.
Experts say it may never be full again. Lake Mead is now at 36 percent capacity — a number that will continue to fall as the reservoir’s rapid decline continues to outpace projections from just a few months earlier. Water levels are projected to drop another 20 feet by 2022.
“This [rapid decline] scares me,” said Fleck. “It’s dropping so fast that it may be overreaching our ability to cope with the problems. I did not anticipate the bottom to drop this quickly, and we’re only talking about Lake Mead.”

Lake Mead has lost 5.5 trillion gallons of water since then

That is more than 1,000 Olympic-sized swimming pools lost every day for nearly 22 years.
When Fleck visited Lake Mead 10 years ago it was 13 feet higher than the current level. Even then, he recalled being terrified by the rapid water loss.
He visited every year since then and has seen the physical changes around Lake Mead firsthand. The “bathtub ring” is a visible reminder of where the water levels once peaked.

And climate change is making that worse.
As temperatures warm, the snowmelt that supplies the river decreases and more water evaporates, especially during extreme heat waves like the West is experiencing this week.
Six feet of water is an average loss of 300 billion gallons per year on top of the water withdrawn for human use and power generation. About 40 percent of the annual evaporation occurs in June, July and August — enough to supply water to 75,000 Las Vegas Valley homes for 12 months.
Excessive heat waves can easily account for more than 10 billion gallons of evaporated water this week alone. That’s enough water to fill 15,000 Olympic-sized swimming pools.

The Hoover Dam, which forms the Lake Mead reservoir, produces about 2,000 megawatts of hydropower — enough electricity for nearly 8 million Americans. 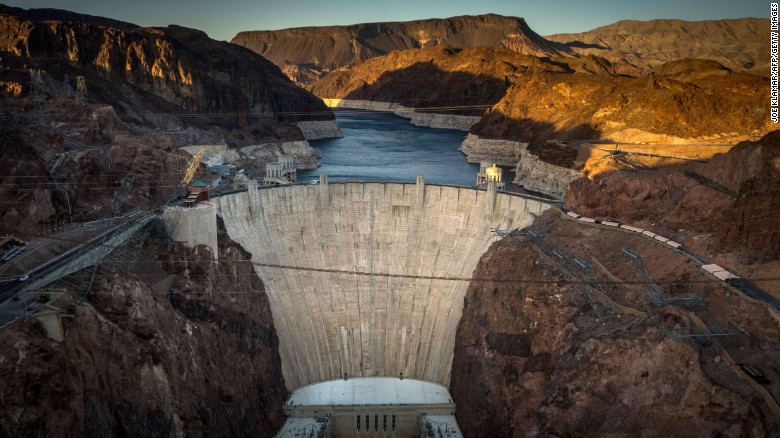 The Hoover Dam was built in the 1930s to create Lake Mead. The dam’s generators provide power for public and private utilities in Nevada, Arizona, and California.
But with less water flowing through Hoover Dam, its capacity has been closer to 1,500 megawatts in recent weeks, a drop of roughly 25 percent.
The decline affects several states, including California, Arizona, and Nevada, all of which get their energy from the Hoover Dam.

If the lake loses another 175 feet, water will no longer flow through the Hoover Dam

Experts say the “dead pool” level is at 895 feet, at which point water no longer passes through the Hoover Dam, thus cutting it off for everyone downstream.
“What we need to do is recognize the science behind this reality and that this does not get better,” Fleck said. “We’re all going to have to deal with less and collaborate on a new set of numbers that reflects the reality of the science today.”

Las Vegas has been preparing for the worst-case scenario for years. The city draws water from two underwater intake structures near the western shore of the lake. But they are becoming unusable as the water level drops beneath them. 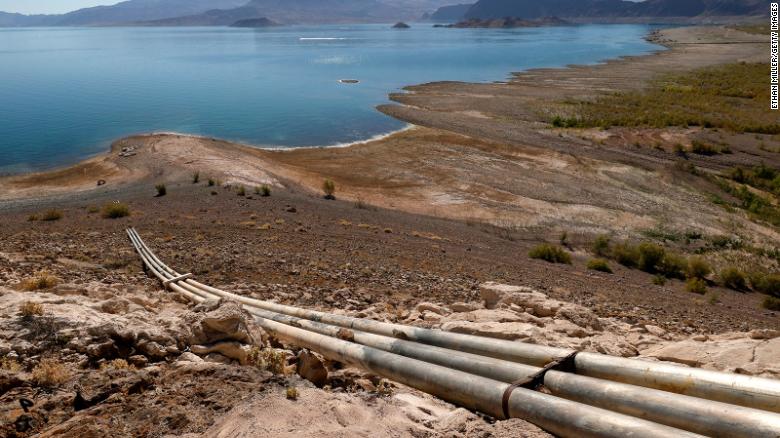 Pipes from an abandoned water intake tower are shown at Lake Mead on June 12, 2021.
In 2015, the city built another intake, also known as the “third straw,” as a last-ditch effort to keep Lake Mead’s water flowing. The more than $800 million structure is essentially a three-mile long tunnel that would suck water directly from the bottom of Lake Mead.
“There’s a risk when [water managers] cling to the hope of a big snowpack bailing us out,” Fleck said. “We need to recognize that there’s going to be less water to work with.”