by (Evtol): In 2016, Vertical Aerospace Ltd. was founded by Stephen Fitzpatrick, CEO of OVO Energy, with the vision of decarbonizing air travel using the best technology from the aviation, energy and automotive industries… 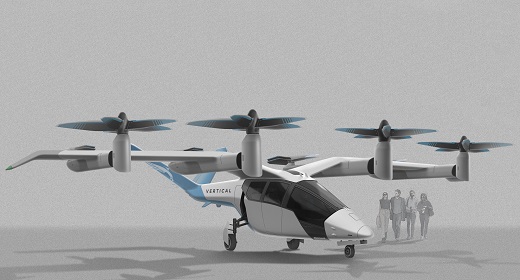 In early September 2018, Vertical Aerospace revealed it had 28 aerospace engineers and “experts from technologically advanced sectors such as Formula 1, Energy and Defense.” In October 2019, Vertical Aerospace publicized it had 70 employees and was actively hiring around 20 engineers, technical experts and operations personnel. As of March 24, 2021 the company announced it has 120 employees.

On Aug. 10, 2020, Vertical Aerospace unveiled a 13 second YouTube teaser animation of its production aircraft. The eVTOL’s capacity will allow one pilot and four passengers, use fly-by-wire technology, have a composite fuselage, and allow customization of the landing gear allowing the purchase of either skids, wheels or flotation landing gear as required by the customer.

On Aug. 26, 2020 the company revealed their new aircraft for Urban Air Mobility, the VA-X4. The aircraft has a very sleek and modern design holding five people (one pilot and four passengers), has a cruise speed of 241 km/h (150 mph), a range of 161 km (100 miles), a separate baggage compartment, space for baggage next to each seat, has twelve propellers, a high wing, a V-tail, has retractable tricycle wheeled landing gear and is 100% electric.

Safety is at the heart Vertical Aerospace and comes before anything else. VA-X4 will be flown by experienced pilots and certified through EASA, at exactly the same safety levels that we have all come to rightly expect from commercial airlines. VA-1X will have exceptional safety levels, inherent redundancy and be a really safe, great way to travel.

The interior of VA-X4 was designed to create an outstanding passenger experience with side doors allowing entering and exiting the aircraft with ease. There is a separate luggage compartment and room for luggage at your seat. The aircraft sports a skylight and large side windows providing spectacular views for the passengers. USB ports will be available to charge your phones, pads and laptops while screens above will provide flight status information.

The aircraft is all electric, providing emission-free air transportation and the company’s objective is to power their aircraft with renewable energy whenever possible. In addition, the company is also working with suppliers to provide them with a sustainable supply chain. The company has revealed that the VA-X4 eVTOL aircraft can achieve noise levels which are 30 times quieter than the equivalent helicopter. Because the aircraft is aerodynamically efficient, it will be able to fly its missions with far less energy than a helicopter would need.

The VA-X4 has been designed to be a high performing aircraft, able to connect entire regions as well as carrying out shorter missions across single cities.

The company purchased the Formula 1 motorsport engineering group MGI Consultancy in October 2019 and is now called Vertical Advanced Engineering. Vertical Aerospace stated in their Aug. 26, 2020 press release announcing the VA-X4 eVTOL aircraft that, “it is developing cutting-edge aircraft by combining the rigour and discipline of aerospace with the pace and agility of F1 (Formula 1 racing, engineering and materials)”.

A March 24, 2021 Flight Global in-depth article revealed, among other details, that Vertical Aerospace foresees producing several thousands of the VA-X4 in the first few years once manufacturing begins and seeing profitability in the 2024-25 timeframe.