What Every Dad Should Keep In Mind About Parenting Humor

by Adam Bulger:  Humor is a powerful tool in a parent’s arsenal. But it’s good to think about whether a dad joke is used to lighten the mood, or maintain distance… 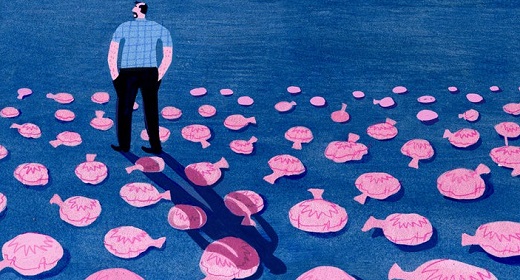 ast night, I accused my neighbor of being an alien. That infuriated my daughter. My mom had asked my daughter about the neighbor. But my kiddo was distracted by something on TV, and didn’t answer. To grab her attention, I said that I knew a fun fact about the family: they were from outer space and their house is a spaceship.

My daughter reacted with stone-faced outrage. It was pure, white-hot humorlessness. Like Margot Dumont clutching her pearls witnessing the Marx Brothers’ antics. Before I finished my sentence, she angrily asserted that the neighbors weren’t aliens, just regular people.

Like many dads, humor is a big part of my parenting style. But I recognize that many jokes, like my tossed-off attempt above, entail risk. That joke could have felt like teasing. My daughter’s feelings could have been hurt. My delivery involved cold, ironic detachment, which could make my warm, authentic dad-self seem fake. Too many jokes like that could foster very unfunny feelings of alienation. And it can be hard for funny dads to recognize where the line is drawn.

There’s a bull market for dad jokes, both on the internet and in the culture at large. Over 4 million people subscribe to Reddit’s dad jokes forum. Twitter accounts like @baddadjokes and @DadJokeMan have thousands of followers. @Dadsaysjokes has hundreds of thousands. Target carries dozens of dad joke books and games (but only one coffee mug; get on, that capitalism!). We’ve accepted the idea that bad jokes are as much a part of fatherhood as strollers and diaper bags. The baby pops out and a switch flips in our brain, compelling us to ask people if they know what’s brown and sticky (a stick!) or to reply “hello, hungry, I’m dad” when someone tells us they’re hungry.

The risk of humor-driven parenting is paired with potential for reward. As Chloe Carmichael, psychologist and author of the book Nervous Energy: Harness the Power of Your Anxiety, notes, humor can be a quick and effective way to connect with kids because it conveys a desire to entertain.

“It comes from a point of friendliness,” she says. “So you’re trying to do something that on some level would make the other person smile.”

When dad jokes are well-timed and thoughtful, they can help kids relax and open up a window into their inner lives.  But they can just as easily slam that window shut.

“In the same way that humor can help us to kind of ramp onto, and ease into, a topic,” Carmichael says. “Some people may get stuck on the on-ramp and never actually go deeper.”

When you joke about a kid’s problem, you’re hoping to show that the problem isn’t serious. But the danger is that you could instead show that you’re not capable of dealing with their problems in a serious way.

Humor, Carmichael notes, can be a deflection or a defense. “It can be a way to skirt around a topic so that you feel like you’re addressing the topic, but you’re actually missing the substance,” she says. If a joke arises from the discomfort you feel from discussing your kid’s problem, it could shut them down instead of encouraging them to open up.

Dad jokes are notoriously awful — and purposefully so. Yet dads are compelled to make them. A sociological concept called dramaturgical analysis might help explain why. In the 1950s, influential sociologist Erving Goffman examined human social interactions through the metaphor of theater in his book The Presentation of Self in Everyday Life. Goffman believed that people perform roles in all social interactions. Like actors, people behave in accordance with scripts — behaviors and modes of language that allow us to conform for roles we want to play in different interactions. Society’s norms and values are our directors, prompting us to use behavior that’s appropriate to the social interaction.

In a post on the sociology blog Everyday Sociology, University of Massachusetts professor Jonathan Wynn argued that jokes are a form of impression management. Humor can be a powerful way of swaying someone’s perceptions. And that’s especially true for dad jokes.

In telling dad jokes, we’re following a script about how to play the role of a dad. They help give kids the impression that we’re benign authority figures. They soften what might be perceived hard edges. They say we’re goofballs who don’t take themselves seriously. The danger is that the role also signals that we don’t take our kid’s concerns seriously.

If your kid wants to discuss a topic and you crack a joke, it can shut down the conversation. That’s often fine. Kids can take things too seriously and puncturing their melodrama can help them learn a little resilience. But it’s good to be aware, as joking about something that’s serious for your kid doesn’t always make it less serious for them.

She offers an example. Suppose that your child is completely stressed because they’re really behind on their homework. And you’re trying to lighten the mood and convey that this is a manageable problem. By joking a little bit, you’re signaling that you’re not panicked and that you have faith in them through being lighthearted about it. Whereas that lightheartedness around something that’s very serious can be scary for someone who doesn’t feel that it’s a laughing matter.

Humor is a great tool, one that belongs in every parent’s quiver. It’s smart to stop every once in a while stop and consider of one of comedy’s biggest rules: timing. If you crack wise to avoid serious emotions, you may seem less capable of helping your kids handle serious things. You’re just some guy who’s always telling jokes.