by Catherine Pearson: Erase these common phrases from your parenting vocabulary… 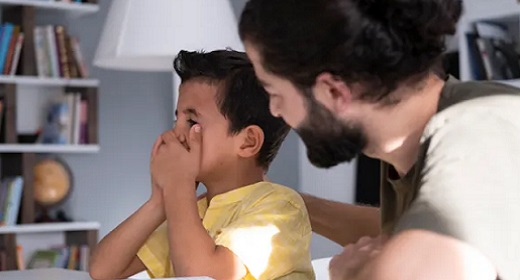 Parents don’t set out to say hurtful or harmful things to their children, but it happens. You’re tired, they’re pushing your buttons, and you’re frustrated after asking them for the 600th time to clear their plates or get out the door on time. You could also be inadvertently repeating things you heard in your own childhood that your parents (and maybe even you) didn’t realize took an emotional toll.

We parents are trying our best, but sometimes — a lot of times — we fall short. That’s why it can be helpful to know some of the potentially damaging phrases parents often resort to without realizing their impact. It’s not about beating ourselves up. It’s about doing better by being a bit more conscious of our language.

So HuffPost Parents spoke with several experts who shared some harmful phrases you should try to erase from your vocabulary — and what to say instead.

Kids often cry or melt down over stuff that seems really silly. (Recall the delightful “reasons my kid is crying” meme that had a real moment a few years back.) But while kids’ crying and whining can definitely get under their parents’ skin — particularly when it’s over something you think they should be able to cope with — it’s harmful to diminish their very real feelings by basically telling them to buck up.

“These little problems — and the emotions that come with them — are actually huge to our kids,” said Amy McCready, a parenting educator, the founder of Positive Parenting Solutions and the author of “If I Have to Tell You One More Time.” “When we discount their emotional responses to very real challenges, we tell them, ‘How you feel doesn’t matter,’ or ‘It’s silly to be afraid or disappointed.’”

Take a moment and try to understand things from their perspective. McCready recommended saying something like: “You seem really scared or frustrated or disappointed right now. Should we talk about it and figure out what to do?” Ultimately, you’re helping them label their emotions (an important part of developing emotional intelligence) and making it clear that you’re there for them.

Children have their patterns, but saying your kid “always” or “never” does something simply isn’t true. (That’s why marriage counselors advise clients to avoid the word “never” with their partners altogether.)

Using broad statements is a red flag that you’ve stopped being curious about what’s happening in this particular moment with your child, according to Robbin McManne, founder of Parenting for Connection.

“It misses opportunity for you to teach them what they should and what they can do next time,” McManne said.

Remind yourself to be curious about why your child is engaging in a particular behavior at a particular time. It really helps to connect by getting physically close to your child in that moment, McManne said, so that you’re not shouting at them from across the house, but you’re right there with them to make sure they’re not distracted by something else.

Sure, it might really bum you out when your child doesn’t listen, but it is important to set (and hold) boundaries without throwing your emotions into the mix. Those feelings are yours, not theirs. Plus, you’re setting a precedent by potentially giving them a lot of negative power.

“When kids feel like they get to decide if you’re happy, sad or enraged, they may happily take the opportunity to continue to push your buttons down the road,” McCready said. “And even when they’re out of your house, this mindset can damage future relationships and set the stage for them to manipulate others to get what they want.”

Set whatever boundary you need to set, like, “It’s not OK to jump on couches,” McCready offered by way of example. Then, give some choices such as, “Would you rather play quietly in here or go outside?”

When you say something like “you should know better,” what you’re ultimately trying to do is guilt or shame your child into changing. But that puts kids on the defensive, which makes them even less likely to listen, McCready said. It also undermines their confidence.

“If we tell our kids they should know better — yet clearly they didn’t — we’re sending the message, ‘You’re too dumb/immature to make a good decision.’ Not exactly what we intended,” she added.

McCready suggested saying something like “Hmm, looks like we’ve got a situation here! What can we do to fix it?” The goal is to focus on solutions — not the problem — so children practice problem-solving and fixing their own mistakes, and think about ways to make better choices in the first place.

When you’re rushing out the door or waiting for your child to complete a simple task that is seemingly taking forever, your instinct might be to just take over. But try to avoid doing that if you can.

“You’re telling your child, ‘You’re not capable of this, so I need to get involved.’ This is both discouraging and really frustrating,” McCready said. “Imagine if you were super close to being able to do your own zipper and just needed a few more tries, but then Dad swoops in and stops you in your tracks.”

Slow down and give your child the time they need to complete their task. Or at the very least, be clearer about why you have to rush. Say something like, “I’ll help you just this once since we’re running so late, but let’s work on this together later!”

One of the most valuable things parents can do for their children is simply avoid labeling them, McManne said. Labels hurt the parent-child relationship because they get in the way of parents seeing their children as struggling and needing help. Parents start to link certain behaviors with whatever label they’ve given to their child, rather than digging in and really trying to understand what’s happening developmentally.

“Labels take us further out of compassion and curiosity,” McManne said.

Labels also have the potential to become self-fulfilling. If children hear from parents that they’re a certain way, they might come to accept that as true — even if it doesn’t feel true to them.

Even labels that seem positive like “You’re smart!” can actually be harmful, McCready said.

“When we say ‘you’re smart’ or ‘you’re athletic,’ we’re telling our child, ‘The only reason you did well on that test is because you were born brainy,’ or, ‘You wouldn’t have made that goal if it weren’t for your natural ability.’ What’s more, if our child bombs the test next time, they’ll be left confused and discouraged, questioning their own ability. If they’re so smart, why did they fail?”

Notice and applaud effort, not outcomes. And do whatever you can to avoid labeling your kiddo as anything, good or bad.