Could One Of America’s Reddest States Be The Next Green Crypto Capital?

by Robert Hefner: By any definition, Oklahoma is deep red… 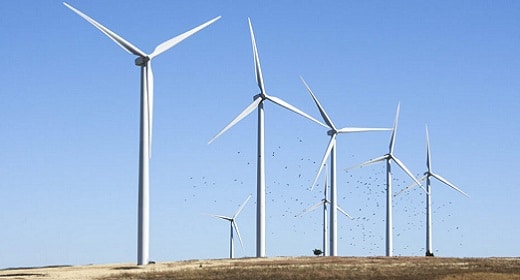 All 77 counties in Oklahoma have supported conservative Republican presidential candidates since it voted for Democrat Lyndon Johnson in 1964. For decades, oil and gas exploration has been a key driver of economic growth. But like its Texas neighbor, Oklahoma is blessed with more than just oil and gas. It also has an endless source of wind and solar power.

This explains how Oklahoma supplies the cleanest, cheapest electricity mix in the United States. You read that right. At an average price of $0.0759 per kilowatt-hour (kWh), the state is the lowest cost provider of electrical power in the U.S. What makes Oklahoma unique is its mix of energy.

Wind is providing more than 40 percent of that power and coal less than 7 percent. The rest is largely from natural gas. Moreover, while solar only supplies a tiny percentage (0.07 percent) of Oklahoma’s power, it ranks as a top-five solar potential state and is quickly moving up the ranks — it has improved its installed solar capacity ranking from 47th in 2019 to 36th this year.

The ‘black gold’ of the 21st century

The state’s combination of clean, low-cost power has triggered a quiet land rush by energy-intensive companies. Increasingly, the “greenness” of power sources is playing a critical role in where companies, particularly data-focused companies such as Amazon, are locating their massive energy-consuming data farms. If the IT sector were a country, it would be the third-largest consumer of electricity, behind only China and the United States. Google’s second-largest data center in the world is in northeast Oklahoma, where it has quietly invested more than $6 billion to date.  The clean, inexpensive energy opportunity for Oklahoma today is as large as the discovery of oil — or “black gold” — was for my great-great-grandfather.

Another fast-growing industry is eager to turn Oklahoma’s green energy into gold: Crypto miners. Oklahoma is a natural location for the sustainable mining of crypto coins. In a region accustomed to the boom and bust of economic cycles, entrepreneurs see Oklahoma as an alternative to China, where crypto miners are increasingly nervous over its unpredictable business environment and where its electricity mix is two-thirds coal-fired. Oklahoma, on the other hand, has what crypto miners value the most: clean, inexpensive green energy.

Green crypto made in America

This will come as a great relief to a once high-flying industry recently battered by bad news. In China, the Chinese Communist Party seems intent on reigning in what they perceive as a threat to their iron-fisted control over the Chinese national currency, the yuan. Bitcoin and alt-coins are also the targets of environmentalists concerned about the intensifying amount of energy needed to “mine” new coins, both in China and other countries.

This makes the Oklahoma-mined crypto value proposition overwhelming in my view. Oklahoma can offer cheap, renewable power to produce green crypto coins — made in America. Mining in Oklahoma neutralizes China’s relentless attack on the Bitcoin blockchain by dramatically increasing the American crypto mining (hash rate) market share. And it can be mined without being affected by the growing environmental and human rights abuses in China.

In Oklahoma, where wind comes sweeping down the plains, its sprawling land resources and low-cost, clean water provide additional benefits to crypto’s cooling infrastructure. And it will be powered by the cleanest, cheapest energy the United States has to offer.

To my green friends, skeptical of both Oklahoma and crypto, here is an opportunity to help eliminate a major source of methane emissions in the U.S. and offer an alternative to China’s dirty coal-fired power.

Tulsa-based Wampum Mining, for example, is the first company to repurpose an entire natural gas field in Osage County, Oklahoma for Bitcoin mining. To my green friends, skeptical of both Oklahoma and crypto, here is an opportunity to help eliminate a major source of methane emissions in the United States and offer an alternative to China’s dirty coal-fired power.

My company, Hefner Energy LLC, has begun to work on this new digital green frontier too. We have line-of-sight on a power purchase agreement exceeding 1,000 MW at net 3-4 cents per kWh, which would make our location the largest crypto mine in North America. And it’s right here in my backyard.

Oklahoma, yet again, is opening up a new frontier — a digital frontier. Let the new Land Rush begin.