Europe Just Unveiled Its Most Ambitious Climate Plan Yet. Here’s 6 Things You Need To Know.

by Joe McCarthy: “The fossil fuel economy has reached its limits….” 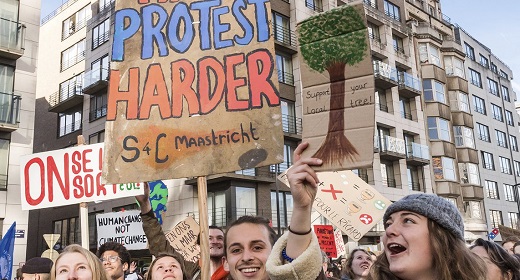 The European Union has vowed to cut its greenhouse gas emissions by 55% by 2030 compared to 1990 levels, according to the political bloc’s newly released Green Deal proposal.

The plan, if fully implemented, would establish the 27-country bloc as a global leader on climate action and would entail transformative action across all facets of its economy and social life. The plan promises to usher in a new era of environmental responsibility, while also prioritizing “a socially fair transition” that ensures the poorest countries and most vulnerable communities are not left behind.

“The fossil fuel economy has reached its limits,” Ursula von der Leyen, the president of the European Commission, said in a statement. “We want to leave the next generation a healthy planet as well as good jobs and growth that does not hurt our nature.”

While the plan goes beyond previous commitments by the EU, environmental activists like Greta Thunberg say it still fails to live up to the challenge of the climate crisis which requires far more urgent action.

Here are six things to know about the European Green Deal.

1. The EU plans to expand and strengthen its carbon trading system.

The EU has long relied on a cap-and-trade system to reduce carbon dioxide emissions from power generation and heavy industries. The new proposal aims to expand this system to cover aviation, while also developing a new system for road transportation and buildings that will focus on point-of-service fuel (how people get fuel for their cars and for heating purposes).

The EU also wants to require countries to spend all revenue from these systems on climate-related programs. In particular, the Green Deal encourages member countries to use the funds raised from cap-and-trade to help low-income households, small businesses, and drivers.

2. Member states will be asked to cut emissions based on their abilities.

The EU economy is not uniform. Some countries, like Germany, are far wealthier than others and some, like Poland, are more dependent on fossil fuels like coal. The Green Deal proposal recognizes these differences and will craft emissions reductions targets for each country based on their abilities.

The Green Deal calls for countries to transform agricultural production, restore forests and wetlands, and establish protected wildlife zones that can act as carbon sinks. The agricultural system, in particular, will need to be completely overhauled to minimize harmful practices, improve soil conditions, and ensure food security.

One headline-grabbing detail calls for the planting of 3 billion trees across the EU by 2030.

4. Renewable energy and energy efficiency are a primary focus.

Roughly 75% of EU emissions come from energy production, according to the Green Deal press release. The only way a 55% emissions reduction can be achieved is through a rapid transition to renewable sources of energy such as wind, solar, and bioenergy.

In addition to massive investments in renewable energy, the EU also plans to improve energy efficiency in buildings, homes, and other infrastructure. The public sector, in particular, may be required to overhaul 3% of buildings each year under the new plan.

The EU notes that these transitions will be a boon to the economy, creating up to 160,000 jobs by 2030 in the construction sector alone.

By 2035, the EU wants all cars registered on the road to be net-zero, which means that every car on the road will either be electric or powered by hydrogen fuel. To make this possible, the EU will be facilitating the construction of charging stations while also subsidizing the transition for consumers.

When it comes to the aviation and maritime shipping sectors, the EU is calling for improved fuel efficiency, energy efficiency for supporting infrastructure, and the establishment of cap-and-trade systems.

The EU also wants to revamp its tax system to promote renewable sources of energy, while removing subsidies for fossil fuels. This effort could stoke unrest across the bloc as households face higher energy prices for heating their homes as countries transition to renewable energy, according to the New York Times. Accounting for this possibility, the plan sets aside funds to support affected households.

Additionally, the EU wants to safeguard companies that will be forced to invest in climate action by putting a carbon tax on select products made outside of the EU to ensure price parity.

The European Green Deal is not set in stone. It will now go through rounds of debate and will likely be amended. However, its intentions could pave the way for bolder climate action in the years to come.

“This is the make-or-break decade in the fight against the climate and biodiversity crises,”  Frans Timmermans, executive vice-president for the European Green Deal, said in a statement. “Getting to a green and healthy future for all will require considerable effort in every sector and every Member State.”

“Together, our proposals will spur the necessary changes, enable all citizens to experience the benefits of climate action as soon as possible, and provide support to the most vulnerable households,” he added. “Europe’s transition will be fair, green, and competitive.