How Mindfulness Shifts Our Perception Of Time

by Sharon Begley: The passage of time seems to speed up as we get older—but research finds this unnerving phenomenon may be allayed by learning to more attentively savor all the familiar details of our lives… 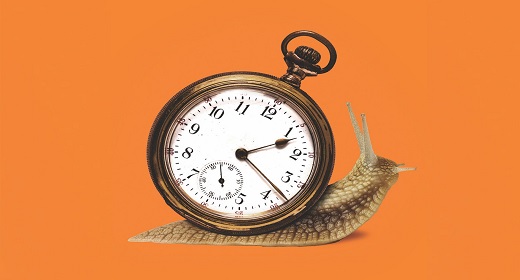 Imagine a woman, well into her seventh decade of life but still mentally sharp, taking her grandson on his first walk along the beloved beach where she has lived for years. The little boy hears the roar of the surf, the screech of seagulls; he sees sand and sand castles, families under beach umbrellas, toddlers scampering away from the incoming tide, a carpet of tiny shells and garlands of shiny brown seaweed; he smells the briny, metallic air. To him, many things happened. The grandmother, in contrast, experiences these details much less distinctly. This means that for her, just one thing happened: another beach walk.

The difference between the grandmother’s and the boy’s subjective experiences of the identical physical experience offers a tantalizing clue to something that explorers of the human condition, from novelists to psychologists, have puzzled over: why our sense of the passage of time speeds up as we age. You’ve almost certainly experienced it. How can I have been working here for 10 years, when it feels like employee orientation was only yesterday? you ask. Where did the summer go? you wonder. And in your darker moments, Where did my life go? You don’t need to be as old as our beach-walking grandmother to feel this; the perception that time is accelerating creeps in well before middle age.

Scientists have identified many reasons for this, but one that has come to the fore recently has both the feel of truth and, even better, offers a hint that mindfulness might help counter the sense that life is slipping away, like the sand in an hourglass whose neck has inexplicably widened.

The Melting-Pot of Memory

The new idea is this. As we get older, we “chunk” the experiences we’ve had into broad categories, bundling individual moments into larger, more generic groups in our minds. The grandson’s beach walk, in his memory, consisted of dozens of vivid, individual experiences. To the grandmother, these experiences are so familiar that they get filed as a single one: “beach walk.”

Similarly, with age we group experiences into broad chunks such as “work” or “family” or “fun outings,” psychologist Mark Landau of the University of Kansas and his colleagues argued in a 2018 study. As a result, to an older person, “fewer things seem to have occurred in a given period, so it seems to have passed faster, in retrospect,” they wrote.

The mindfulness connection? It may be possible to use mindfulness meditation, or even casual applications of that way of observing thoughts and experiences, to heighten awareness of them in a way that keeps the passage of time from accelerating.

Our perception of how quickly time passes varies according to numerous factors, some as changeable as emotion.

A little background: Our perception of how quickly time passes varies according to numerous factors, some as changeable as emotion—as per the adage “Time flies when you’re having fun.” Dozens of studies have found that positive mood and high arousal seem to make time seem to pass more quickly in the moment. In contrast, if you are in pain then the two hours until your next Tylenol feels like it is passing with the speed of cold molasses. If a dreaded event is approaching—your speech is in half an hour!—the time seems to speed by. Depression makes time seem to pass more slowly, as do boredom and doing physically or cognitively undemanding tasks. In those situations, the brain has spare capacity “to focus attention on the passing of time,” psychologist Ruth Ogden of Liverpool John Moores University told me, “and a greater-than-average level of attention to time may result in the sensation of it passing more slowly.”

During the COVID-19 lockdowns of 2020, Ogden asked 604 participants in the UK about their sense of time’s passage. Older people, and those on whom the social isolation was especially hard, said time seemed to drag over the course of a day or week. That reflects boredom: When we have nothing to do and feel generally miserable, the hours stretch out interminably— Will this day never end?

That older people in this study experienced time as passing slowly was somewhat surprising, however, since “older people will often make statements which suggest that time passes more quickly as you age—for example, ‘Christmas comes around more quickly each year,’” Ogden said. But because lockdown curtailed socializing and normal day-to-day activities, she said, “it’s possible that the loss of their freedom, coupled with less ability to engage with technology to maintain social relations, left the elderly more vulnerable to experiencing time passing slowly.”

Others in Ogden’s study felt time fly. “People who were younger, more satisfied with their social interactions, busier, and less stressed were more likely to experience time passing more quickly,” she said. “These factors [increase] our level of physiological arousal, [which] makes time pass more quickly.”If, however, we ask people in the winter of 2021 to reflect on time’s passage over the previous 12 months, their retrospective judgment might differ from their in-the-moment perception. “Retrospective judgments are heavily influenced by the amount of memory content from the time in question,” Ogden said. With few distinct memories, “we feel like less time happened. Lockdown has been boring, we haven’t been able to do things, and we may have formed fewer memories than normal. We may therefore look back on this period as feeling ‘short.’”

Why Does Time Seem to Speed Up with Age?

Which brings us full circle to why many of us, particularly as we get older, find ourselves asking where did the last 10 (or 20, or…) years go? This retrospective judgment of time’s passage over decades is much more consequential than whether we feel a particular afternoon flew by—it can profoundly influence how we evaluate our lives. By understanding the reasons why “time often seems to pick up momentum, going faster and faster as we get older,” Landau and his colleagues wrote, we might be able to prevent a feeling they call “unpleasant, demotivating, and possibly even hostile to the sense that life is meaningful.”

The scientists suspected that the different subjective experiences of the grandmother’s and grandson’s beach walk might be driving our retrospective judgment of time passing more quickly with age. That is, by “chunking” our experiences, we feel we have had fewer of them. The researchers therefore had 107 volunteers either write about how their experiences over the last year were similar to those of other years (which encouraged chunking) or how things could have transpired differently (no chunking). The chunkers felt the previous year lasted less than 12 months, but the non-chunkers did not. “Perceiving a given period as passing faster depends on whether one chunks that period,” the scientists concluded.

Although they encouraged volunteers to chunk, we do it spontaneously, and we do it progressively more with age, because fewer experiences feel new. Looking back at the past year or even decade, we remember just a few categories of experiences (that is, chunks), not a rich smorgasbord of distinct experiences. Time flew by.

If we focus on processing a moment, rather than letting it slip by mindlessly, we can better apprehend its uniqueness.

A remedy for that might be mindfulness, the scientists suggested. If we focus on processing a moment, rather than letting it slip by mindlessly, we can better apprehend its uniqueness and keep it from being obliterated by chunking—more like the grandson’s beach walk, rather than the grandmother’s.

In shorthand, says neuroscientist and mindfulness researcher Amishi Jha, we can understand the relationship between mindful attention and long-term memory storage as: “Better perception—>better encoding—>better working memory—>better long-term memory (for facts and episodes)—>fuller embodied retrieval.” When we get into the habit of paying attention nonjudgmentally—remaining curious about the experiences and people in our lives, no matter how familiar they get—we improve our working memory, which may in turn aid our ability to store and recall long-term memories of events and information.

“The logic is this: Improved attention leads to improved encoding into working memory,” Jha explains. “With higher-integrity working-memory representations for content, the better the chances for successful consolidation into long-term memory and the better the chances of successful learning and retrieval of information,” although, she notes, research that formally connects these dots as relates to mindfulness has yet to be published.

Mindfulness has “the potential to resensitize us to the satisfaction of simple things and, perhaps, counteract life’s quickening pace,” Landau and his colleagues suggested. “When the individual resides more fully in the moment, she or he may also better appreciate the uniqueness of those moments once they have passed.”